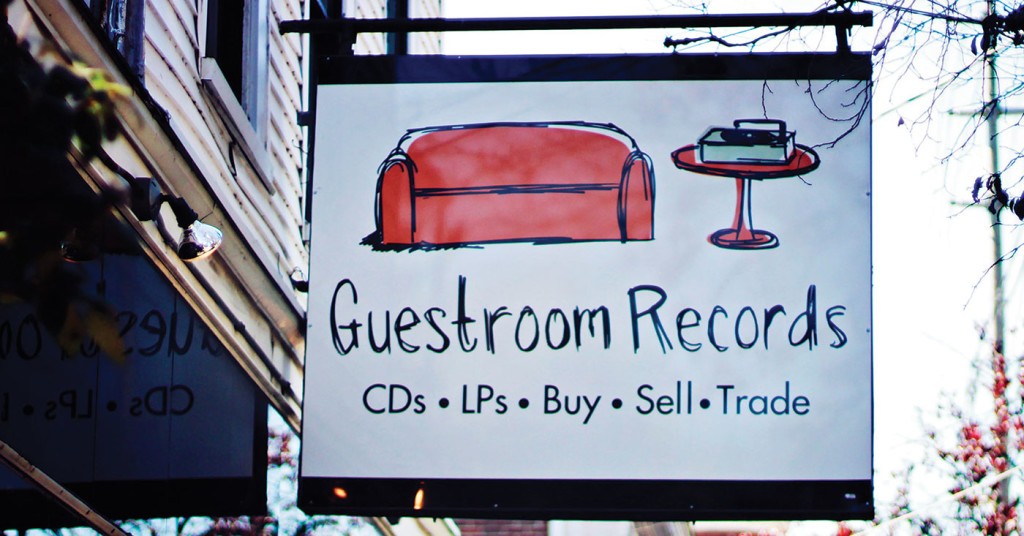 Standing behind the counter at Guestroom Records — a quaint and eclectic shop on Frankfort Avenue, that sits across the street from the Silver Dollar — co-owners Travis Searle and Lisa Foster are talking to me about the shop’s first two years in business, as they multi-task by continuing to interact with customers, check in merchandise and making sure the phones are being answered. Business has been good since they opened the location in 2013, when they moved from Oklahoma, where Guestroom has two other stores — one in Oklahoma City, one in Norman. And they attribute that success to carving out an identity in their neighborhood — that they call “just the right amount of busy” — but also through the interconnectivity between record stores in Louisville.

“When we moved here, people said, ‘You guys are kind of crazy. There are a lot of record stores in Louisville,’” Lisa said. “My first entry into record storing was in Austin, Texas, because I worked at Waterloo Records when I was going to school. Austin has tons of record stores and a great music scene. And there’s kind of a community, in a weird way, between those stores. So as we were talking to people and meeting people, that was the thing that stuck out to us: Each store kind of does its own thing. And with a scene as vibrant and as large as this one is, there’s a lot of different ways to have a lot of different stores. We’re excited to be one of many.”

Travis and Lisa met in Oklahoma, where Travis is from and where Lisa — who was born in Louisville and raised in Cambellsville — relocated to for her first job after college. Two years ago, they were looking to move someplace different, and, after spending more time in Louisville visiting family and friends, they decided to open a branch here. What they developed is a friendly and comfortable store where you can grab a new release, dig for gems or localize your search to the Louisville-focused rack, a section that’s been quickly growing.

“We had a meeting a couple of nights ago and got to exclaim with great joy that so far in 2015, five of our top seven sellers are local releases,” Travis said. “I kind of feel like we are very fortunate — we are certainly helping — but I feel we are very fortunate that the scene here is so strong that we can sell dozens and dozens or hundreds of copies of things from artists that literally live blocks away from here or miles from here.”

And that interest in Louisville music extends beyond locals, as the resurgence of vinyl and the vibrancy of the scene continues to grow. “Another bonus to this location, quite frankly, that we didn’t think about, is how close it is to [Interstates] 64, 71 and 65,” Lisa said. “So, we actually get people, who are like, ‘We were driving through Louisville and we wanted to check out a record store. Who could you recommend who is local?’”

People seek out record stores as a destination spot to stop and interact with a city’s culture when passing through. Lisa and Travis seem to enjoy that ambassador-type role because that’s what each good record store has in common: they’re advocates as much as they are entrepreneurs. “I hope we can continue to not just sell records, but really get people thinking about music in their city in a different way,” Lisa said.