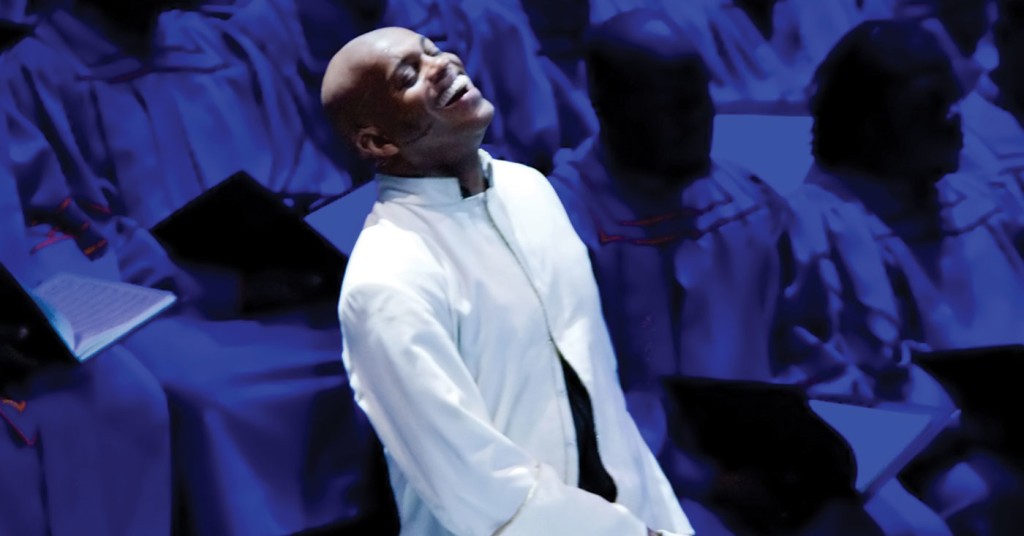 The Louisville Orchestra isn’t just thinking outside the box these days. When it opens its 2015–16 season this weekend with Leonard Bernstein’s “Mass,” it’s making the box bigger.

As in way bigger, with half the orchestra on stage at Whitney Hall, half in the pit, plus a main chorus, a children’s choir, a street chorus, a jazz band, a rock band and … did we leave anything out?

“Bernstein’s Mass: A Theater Piece for Singers, Players and Dancers” is a big number, with a big theme — humans’ eternal struggle with their faith.

“The ‘Mass’ was commissioned by Jackie Kennedy Onassis for the opening of the Kennedy Center in Washington in 1971,” says Arvin Brown, the director tasked with helping the Louisville Orchestra and conductor Teddy Abrams put on a Cecille B. Demille-sized epic in a conventional performance hall. “Bernstein was a family friend of the Kennedys, and a fellow sufferer of the assassination of President John Kennedy, even though the assassination had occurred years before.

“What Bernstein did,” Brown continues, “was use the commission for a piece in which he would take the rituals of the Catholic mass, and the whole procedure of the mass, as an opportunity to explore his own religious questions and doubts —his own search for belief.”

Central in the work is a primary singer, the Celebrant, sung by baritone/tenor Jubilant Sykes. The Celebrant is not strictly a Catholic priest, so much as a symbolic all-faiths leader.

“The Celebrant is a man trying to come to terms with his faith.” says Sykes, who has sung the role in Australia and the United States. “He’s probably been a religious person all his life and now is a leader in his church. He’s doing all the right things for all the right reasons — but now he’s asking himself what he really believes.”

Brown says the choruses have points of view, beginning with established, solid believers, represented by the main chorus, the University of Louisville’s Collegiate Chorale, directed by Kent Hatteberg. Additional groups, taking additional points of view, include the Louisville Chamber Choir, the Highland Hills Middle School Boys Choir and the Louisville Male High School Band. Professional singers fill the Street Chorus, a less socially harmonious group, for whom, Brown says, “the ritual process proves to be increasingly dissatisfying, and rebel against it.”

Obviously there are quite a few tugs and turns going on in the story, and Brown might be just the man to make a show out of it all. He started out in theater and opera, but moved to television, where he has directed such outstanding series as “Ally McBeal,” “Chicago Hope” and “The Practice” for writer-producer David E. Kelley. In recent years he’s directed actress Kyra Sedgwick in “The Closer,” and Mark Harmon in the top-rated drama “N.C.I.S.”

Brown thinks his TV experience might have him ready for staging a complex theater piece like “Mass” with a scant amount of rehearsal time with the orchestra and choruses.

“I’ll tell you one thing TV brings is time pressure — and I’m a master of that because television happens so fast,” says Brown. “I do mostly one-hour drama series and every time out it’s a mini movie. Every episode there’s never enough time, and the pressure is enormous. You learn a shorthand for dealing with the performers and the crew and everything else.”

Brown will also draw on his stage background. In TV the director is able to point the camera at what he wishes the audience to see. To create depth. On a wide horizon stage full of players and singers, he moves the audience’s focus through music and choreography. “It’s all about listening to the music, and seeing where it leads you,” the director says.

There are other theatrical pros at work on the “Mass,” including set designer Nicholaus Raubertas, a colleague of Brown’s who also sits on the orchestra’s board of directors.

The initial production of the “Mass” for the opening of the Kennedy Center drew much attention, but little critical praise. Brown says he happened to have attended the performance himself, as a youth, though he remembers little of the experience. He thinks critics forty-some years ago probably didn’t care for Bernstein’s use of contrasting musical forms. That’s all in vogue today. Mixing musical metaphors has been, in fact, a hallmark of Teddy Abrams’ programming with the Louisville Orchestra.

“I think this piece has enormous power, and it’s all the more remarkable because there’s some really fun stuff in it,” says Brown. “Bernstein made it very clear at all times that he was considering theater in it, as well as a piece of classical music. For all its controversy when first produced, it has gained a wider and wider acceptance.”

And then there’s Bernstein, himself. The conductor/composer was a wildly-popular figure of the 1950s and ’60s, conducting the New York Philharmonic, starring in the “Young People’s Concerts” series on CBS and composing the classical “Candide” and popular “West Side Story.”

Of course, the center stage time disappeared with his death, but Bernstein appears to be making a comeback today through his compositions, including “Mass.”

One thing to listen for early in the work is a song sung by Sykes called “The Simple Song.” Pretty, poignant, pulling themes from the Book of Psalms.

Make it up as you go along, lauda laude.”

Simple lyrics, with a Bernstein melody to make it a song,

“I can tell you as a sentiment, you can’t go wrong with a biblical text, especially out of the Old Testament,” says Sykes. “From Psalms, praising God despite the heartaches and pains of life. It rings true as probably the most clear thing, the most straightforward.”