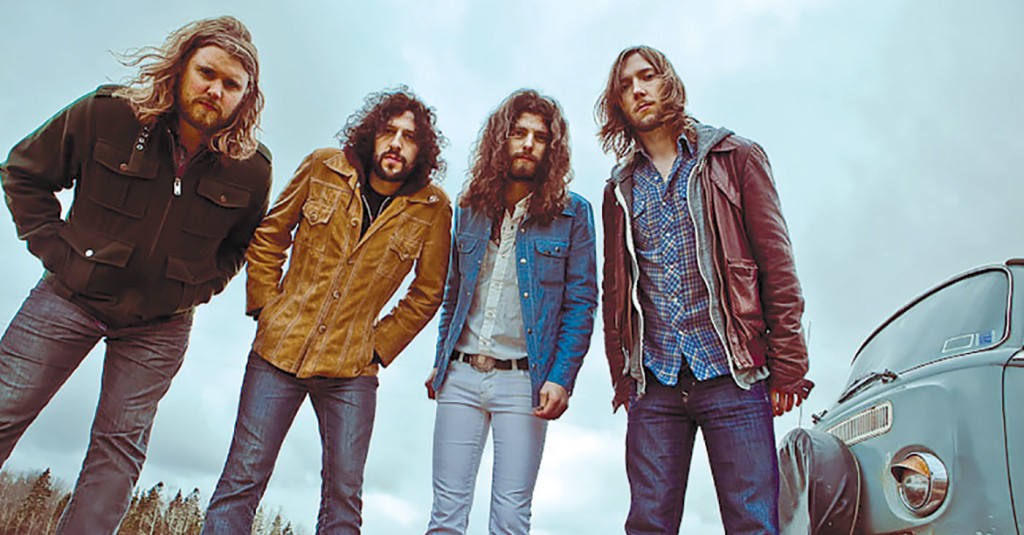 “We just try not to repeat ourselves. We keep it in the same territory, but try to push it in different directions,” Ewan Currie, the singer/vocalist of The Sheepdogs humbly says about his band’s ability to carefully lean into the classic rock formula, while still being able to move forward. This is evident on the new record, “Future Nostalgia,” where the lead single, “Same Old Feeling,” has a breezy, warm throwback sound that sits somewhere between The Band and John Fogerty, while other songs dip into spacey psychedelia (“Jim Sullivan,” “Take A Trip”), supercharged riffs (“Back Down”), melodic power ballads (“Giving It Up For My Baby”) and a lot of other clever variants of a familiar genre.

Which is probably what helped them win a Rolling Stone magazine competition in 2011, making The Sheepdogs the first unsigned band in the publication’s history to be on the cover. It also landed them a record deal, giving them the sort of accessibility that made it all a bit easier — though it didn’t blow them up to the point of being abundantly rich or a household name. Rather, it just kept them together.

“It reinvigorated our career, because we all were about ready to call it a day,” Currie says, during a phone call from the band’s van that was on the way to the Dallas/Fort Worth airport last week.

And, although they’ve battled through some changes since — they parted ways with their original lead guitarist and added a keyboardist — Currie is pretty happy how things ended up coming together.

“We have a bigger, fuller sound now,” Currie says. “We are really now starting to round it all out.”

And, for The Sheepdogs, a band that have been scraping for notoriety for almost a decade now (they released their first record, “Trying To Grow” in 2007), seeing its share of ups and downs along the way, it still all just comes down to putting in the work and searching for the sound that will continue to keep them moving. And that shines through on their most ambitious album to date, which will be released on Oct. 2.

In the meantime, catch them at Zanzabar on Thursday, Sept. 10.