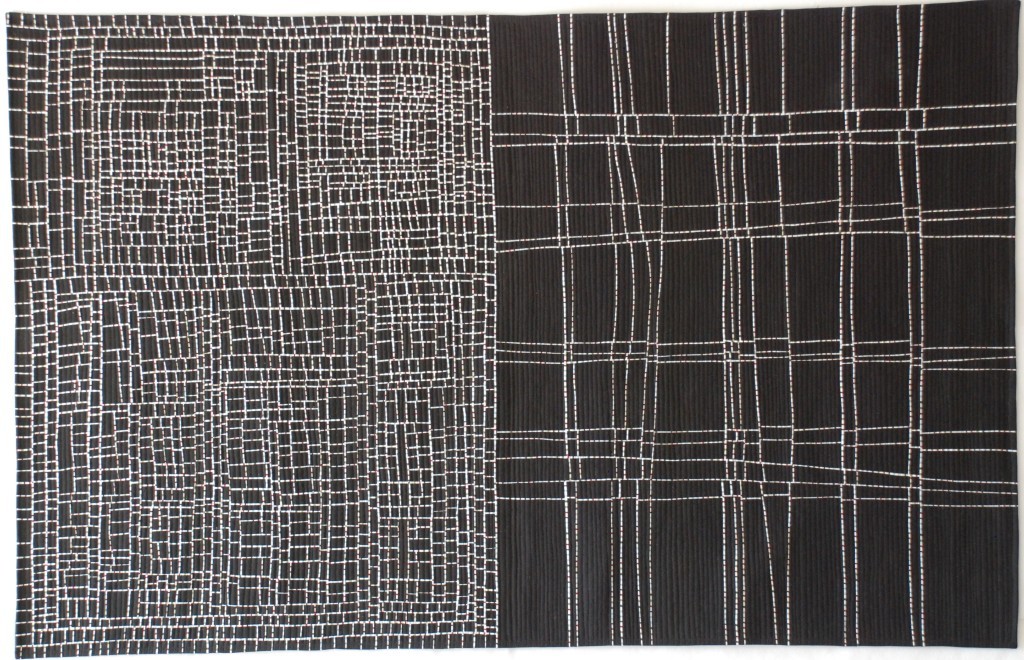 [The above image is “Crossroads 4” by Kathleen Loomis.]

Kathleen Loomis (kathleenloomis.com) works in quilting, a medium people have warm and fuzzy thoughts about. None of that gets in her way in making serious art, full of message, detail and craftsmanship. One of her pieces, “Entropy,” is currently part of the “Quilt National ’15,” which will travel around the United States for two years.

LEO: When did you start making fiber art?

Kathleen Loomis: Learned to sew as a child from my grandmothers, started making quilts in high school, started to call it “art” in the early 1990s.

LEO: You recently published a book — what is it about?

KL: It’s called “Pattern-Free Quilts” and it’s intended to give quilters the confidence and ideas to make up their own designs, not work from other people’s patterns. Probably the work that will stem from the book isn’t art yet, but a first step toward an artist’s approach. I’m at a stage in life where teaching and mentoring is important.

LEO: Have you written other art books?

KL: No, but I have been blogging about art for five years and have probably written enough words there to fill more than one book (artwithaneedle.blogspot.com/).

LEO: What is the most challenging quilt you have made? I think your “Fine Lines” series, using very small strips of fabric, had to be maddening.

KL: Sewing together the very tiny bits of fabric is joy and excitement. Yes, it’s a challenge to get everything to fit together and look good, but it’s similar to the intellectual challenge of crossword or Sudoku or jigsaw puzzles, all of which I love. The challenge, and the overcoming of it, is why you do it. You love the suspense when it hasn’t yet gotten solved and the satisfaction of cracking the hard part that makes everything else fall into place. Often my biggest challenge is knowing when to stop, and then getting the edges into the shape I want, instead of just going on forever. I wouldn’t describe any of this as maddening; I’ll save that word for the task of turning very large expanses of sewed-together bits into a finished quilt. That part is hard work because you have to wrestle a huge bundle of fabric under the arm of a relatively small sewing machine. In that sense, the most challenging quilt is the biggest one (my biggest quilts are about seven feet square).

LEO: So what are these intricate compositions of tiny bits of fabric really about?

KL: All my work is about politics: How our society and our civilization is made up of a bazillion tiny bits, held together in a fragile web of connections that seems to take a lot of abuse. We pollute the environment, we neglect our infrastructure, we quarrel among ourselves, we misread our history, we disrespect our government. So far the web is mostly holding together, but how much longer can it last?

LEO: Is it hard to be a serious artist using a form that is so traditional?

KL: Yes, people always say, ‘Oh, my grandmother made quilts!’ It’s hard to get them (or the mainstream art establishment) to regard a quilt as a legitimate work of art. But I stick with the form in part because the serious message has an extra twist when it comes in a soft, grandmotherly package. It’s also a feminist statement; our traditional forms and techniques are just as valid as the traditional male establishment ones. And I try to subvert the form a bit by making work that isn’t pretty.

LEO: What is something most people do not know about you?

KL: When I was a kid, I was a math and science geek. In my senior year of high school I got to take a college course in nuclear physics, part of a national initiative to train scientists to save America from the communist menace. Recently, I came across an exam blue book from that course and couldn’t understand a single equation or word that I had written. Clearly America had to conquer communism without much help from me.