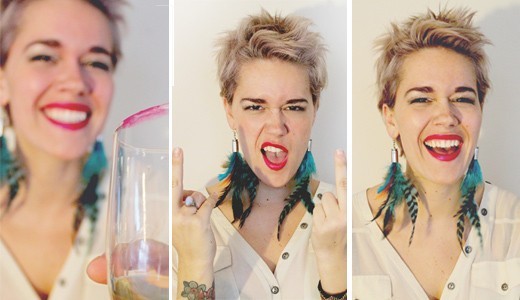 Rarely do I admit that I have a comfort zone.  I like to think that I’m the type of gal that’s constantly branching out, trying new things, especially in the realm of Louisville’s booming bar and restaurant scene. However, I feel many of you can certainly sympathize with one of my own personal hesitations: Rarely do I penetrate that looming barrier known as the Watterson Expressway and find myself amongst the one percent — drinking and dining in Louisville’s East End. This weekend, I’m glad I did as a few friends and I made the trek to the housing complex LC Idlewild on English Station Way in Middletown, wherein lies The Goat.

The Goat, a bar and restaurant with an emphasis on “handcrafted eats, assorted brews and year-round entertainment,” is nestled in the newly constructed Columbus, Ohio,-based Lifestyle Communities (LC) Idlewild. The Goat resides in the complex’s amenity building, which requires meandering through the incredibly Pleasantville-esque neighborhood. While it’s evident the goal was to have the feel of a new age brownstone walk up, the sterile uniformity and sheer perfection of the housing units gave me the creeps. To my surprise, when we entered the restaurant, some character peered through.

The entry to the bar is a massive split staircase, where you’ll find oversized speakeasy-style bar stools and various seating styles including booths with tall, rounded leather-bound backs circa 1920s. While the decor and ambiance feel a bit upscale, you’ll also find bikini-clad residents walking up to the bar for a drink in between swims, corn hole, shuffle board, a jukebox, and sand volleyball. It’s an interesting juxtaposition that I can relate to: You can feel classy, while getting rowdy.

We sat outside under the canopy-draped patio next to the saltwater pool. We ordered off the cocktail menu, and to my amazement, the low price point didn’t seem to fit the ambiance, but I certainly wasn’t complaining. I enjoyed the Elder-Berry (Tito’s Vodka, St. Germain, strawberry preserves, lime, mint) and at only $6.50 each, I had to order two of this divine nectar. My whole brood was impressed with their selections, which included the Cucumber Martini, a Blueberry Mule, and a Raspberry Ginger Martini. The Elder-Berry was the star of the show, though. I’d inject that shit. The bourbon and beer lists are well crafted and the low prices continued to shock me (a Bulleit Rye for $4? That’s unheard of, y’all).

A few shots of silver tequila came along shortly after, because well, that’s what we do, and we decided a few appetizers would help to soak up these delectable libations. Now, I know I’m the barkeep and food isn’t my milieu, but can we talk for a moment about the Buffalo Cauliflower and the Farmhouse Tots? These dishes were a divine accompaniment to Sunday Funday — the tots look like they’re crafted with an ice cream scoop, draped in spicy pork belly and doused a sriracha beer cheese sauce. One of my friends exclaimed that it was almost as if an angel ejaculated in her mouth. True story.

Both the drink and food menus were so exciting (and clearly we were getting continually more buzzed) that it seemed as though we had to try something new every twenty minutes. Service was attentive but not overbearing, and our server handled our drunken escapades with ease. Occasionally I’d look around and gawk at the fact that we were almost completely encircled by an over-50, Sperry-Top-Sider-clad clientele, but the Elder Berry cocktails helped to ease that discomfort. Our server was a cute, young, tattooed chick, after all; we couldn’t have stuck out that badly.

Truly, my only qualm with my experience with The Goat is the distance from my Highlands neck of the woods. If I wouldn’t have had a sober driver friend, our Lyft ride would have certainly been over $50, and that just won’t fly if it’s an establishment you’d like to frequent. With all the different, delectable and exciting aspects of this Middletown gem — there’s so much room for activities, guys! — take this as a lesson in breaking down barriers and through comfort zones 101. You may just end up leaving feeling like you banged an angel.