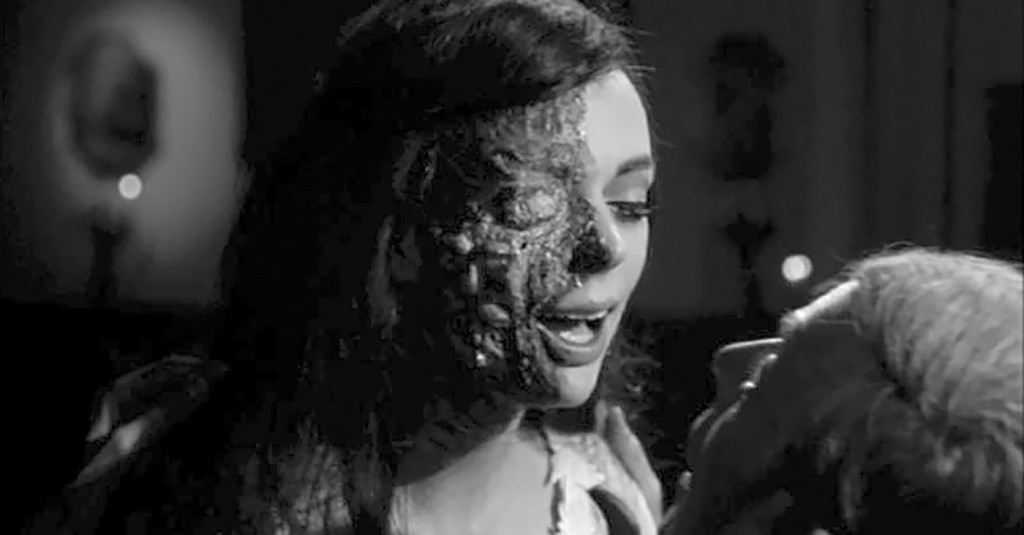 NIGHTMARE CASTLE
1965; $26.98-29.98; UR
Gothic horror icon Barbara Steele famously plays two roles in this sexy, atmospheric masterpiece. She’s Muriel, the slutty wife of a deranged scientist-doctor, who literally cuts out her heart and that of her paramour when he learns of her infidelity. And she’s Jenny, the naive twin who marries her sister’s widower/murderer in a plot to keep his weird research funded. But the murdered pair cannot rest until their hearts are buried, leading to a slam-bang explosion of weird, eerie, haunted terror. With a score by Ennio Morricone and a cast of Euro erotic-horror vets, this is available for the first time in a pristine, uncut Blu-Ray with nearly a dozen bonus features. A must-own.

NOMADS
1986; $22.98-24.98; R
Despite years in Limey TV, Pierce “007” Brosnan made arguably his first credited movie performance in this truly effective — and very unusual — modern horror outing. He’s a French anthropologist who becomes psychically affected while digging up a mysterious extinct tribe deep in the jungle. After moving to L.A., an encounter with a group of young thugs triggers ancient memories of tribal blood, taking him over and endangering Lesley-Anne Down, who ultimately develops psychic bonds of her own. An all-too-real, lights-on horror, disturbing as hell, that will haunt you for days. Belongs on your video shelf; now on Blu-Ray.

EJECTA
2014; $19.98-26.98; UR
An admittedly cheap Canadian sci-fi flick, this isn’t great but has a surprisingly rabid following thanks to an original storyline and a strong finish. The worst thing about it is the music, which smothers everything in gooey yellow ooo-wee-ooo cheeze, but that’s hardly a crime in the world of cheap sci-fi, now is it? Two scientists notice something weird during a solar storm, leading them to uncover a deadly secret about our place in the Universe. The only actors you might recognize are gaunt-faced Julian Richings (Death from “Supernatural”), and pretty Lisa “Haven” Houle. We liked it.

HACKERS: 20TH ANNIVERSARY EDITION
1995; $20.98; PG-13
Often credited with launching the careers of both Angelina Jolie and Jonny Lee “Elementary” Miller in this “surprisingly attractive computer geeks save the world” teen, anti-hero actioner set the standard for a burgeoning computer-obsessed cinematic decade. (In truth, both careers were already over a dozen years old by then, with Miller first appearing in a 1982 Peter Davison “Doctor Who” episode.) A heady mix of bad electronic music (or is that redundant?), nonsensical techno-babble, funny bits by young Matthew Lillard, plus rollerblades, spandex, and painful, cringe-inducing dialogue. It is Freakin’ Awesome! The perfect couch movie, now on Blu-Ray with all the trimmings..

STRANGERLAND
2015; $13.98-24.98; R
We find it surprising that this rough drama isn’t better known, considering that it stars Nicole Kidman, Hugo Weaving and Joseph Fiennes. Nikki and Joe are the parents of two teens (Aussie TV stars Maddison Brown and Nicholas Hamilton) who have just moved to a hardscrabble town in the Australian desert when a massive dust storm buries everything under a thick blanket of red death. With the kids missing, local cop Weaving fears the worst, then begins to question if more than dust is to blame; and the townsfolk come to suspect the parents of unspeakable evil. A powerful treatise on the nature of Man and fear.

THE REBEL: THE COMPLETE SERIES
1959; $42.98-59.98; UR
Veteran TV actor Nick Adams, who starred in a couple of great, cheezy monster-flicks in the ‘60s, was already an established TV star when he portrayed anti-hero Johnny Yuma in this excellent post-Civil War drama. The first series to depict the life-long psychic toll of war on soldiers, he plays a former Confederate grunt wandering from town to town, righting wrongs, lifting the downtrodden, and helping the, er, helpless in hopes of restoring some peace to his soul. Imagine “Kung Fu” with a shotgun and a perfect theme song by Johnny Cash (finally restored in this collector’s edition, by the way), and you have the very definition of “classic TV.”

WELCOME BACK, KOTTER: THE FINAL SEASON
1979; $19.98-29.98; UR
Season four cranked up the drama a bit, with Mr. K. (Gabe Kaplan) becoming vice principal — leading to three of the Sweathogs (Robert “Epstein” Hegyes, Lawrence “Washington” Hilton-Jacobs and Ron “Horshack” Palillo) to drop out of school! In desperation, he turns to John “Barbarino” Travolta to walk them back into the fold, with mixed results. But this season is best remembered as the time when lovable geek Horshack finds love and gets married, despite (like all teens) being totally unprepared. Afterward, in a legendarily stupid move by a TV executive, ABC abruptly canceled the show in order to exploit Travolta more profitably in film. Buy the series.

GREY’S ANATOMY: SEASON 11
2014; $36.98-45.98; UR
Can you believe it? This series has been a hit for twelve years and we’ve never once reviewed it! Well, any editorial we might offer at this point would be superfluous, so we’ll just mention that Season 11 starts with Callie (Sara Ramirez) and Arizona (Jessica Capshaw) dealing with surrogacy (despite the cooling of their relationship), while Dr. Yang’s (Sandra Oh) vacant seat on the board creates tension between Drs. Bailey and Karev (Chandra Wilson and Justin Chambers), and the truth about newcomer Dr. Maggie Pierce (Kelly McCreary) is first leaked – among about a thousand other intertwining plots. Arguably American TV’s finest drama.

HAYATE THE COMBAT BUTLER: SEASON 1
2007; $49.98-99.98; UR
Given it’s popularity, we apologize for never having mentioned this anime before. Oh, Masters! Please don’t beat us! The original manga, now in its 44th volume(!), introduced our hero, a boy who embraces servitude in hopes of paying off the family Yakuza debt, when a misadventure lands him in the mansions of a wealthy young girl — who instantly falls in love with him. The girl winds up penniless, too, so she and Hayate, along with a group of friends, wind up in a fleabag apartment building while the girl fights to recover her fortune. Throughout it all, the shy, retiring boy uses his brains and martial arts skills to protect them all – but that’s the easy part. The humor is spot-on, with a wonderfully cracked view of our world and the vagaries of young love amid some of the sweetest, most unpredictable big-eyed lovelies in all of anime. A real treat, now on Blu-Ray.

LAMBERT & STAMP
2014; $24.98; R
To say we have been longtime followers of The Who is putting it mildly – we both learned our first guitar licks from Pete Townsend, and mastered the all-important Rock Star Swagger at the feet of Roger Daltry – but we had never heard of Chris Stamp or Kit Lambert. Uh, “Who?” Well, as this doc shows, they were two gorilla-filmmaker wannabe’s who started a project about an unknown bar-band called High Numbers. Quickly abandoning their film careers, they took over the band’s management, renaming them The Who (after Doctor Who) and rock legend was born. One terrific doc – if only for the never-before-seen performances of the band as raucous youngsters – awarded our first-ever Supreme Highest Recommendation.

ONCE UPON A TIME: SEASON 4
2014; $36.98-79.98
Skinny-hot Jennifer Morrison from “House” stars as the actual long-lost daughter of Snow White and Prince Charming in this Disney TV drama/fantasy series in which our world is secretly populated by real characters from imaginary storybook lands. Everywhere you look are evil Queens, time portals, warlords, magic, Goldilocks’, and Rumplestiltskins – plus a mysterious Author who may control the fate of all. We don’t know what Uncle Walt would think of this skullduggery, but we like the “Dark Shadows” vibe. In this season “Marion” arrives in Storybrooke, changing everything.

WALT DISNEY ANIMATION STUDIOS SHORT FILMS COLLECTION
2015; $24.98-39.98; UR
Thanks to our ever-waning attention spans (damned beer), there’s nothing in the world that we enjoy more than animated shorts, and even with the obligatory subliminal pulls to run out an buy Disney products, Der Mouse still does them better than anyone. This set includes bits inspired by “Frozen” and “Tangled”, plus some Oscar winners, but our favorites here are the dark, old-school “John Henry”, along with the brilliant “Paperman” and “The Little Match Girl.” Twelve in all, with optional intros by the filmmaker. Video doesn’t get any better than this.

Z STORM
2014; $29.98; UR
By 1974 institutionalized crime had so permeated every aspect of Hong Kong life, business, and government in that they established the Independent Commission Against Corruption (ICAC) – the most powerful police force on the planet – to save their country. This tale of a massive globe-spanning financial scam worth billions (which may or may not be based on real events), involving drugs, sex slavery, murder, and (ugh) lawyers, follows two ICAC agents who risk everything to bring it down, and the abused wife of a whoremongering businessman who gets her revenge by revealing what she knows. Violent and powerful, as only HK can do it.