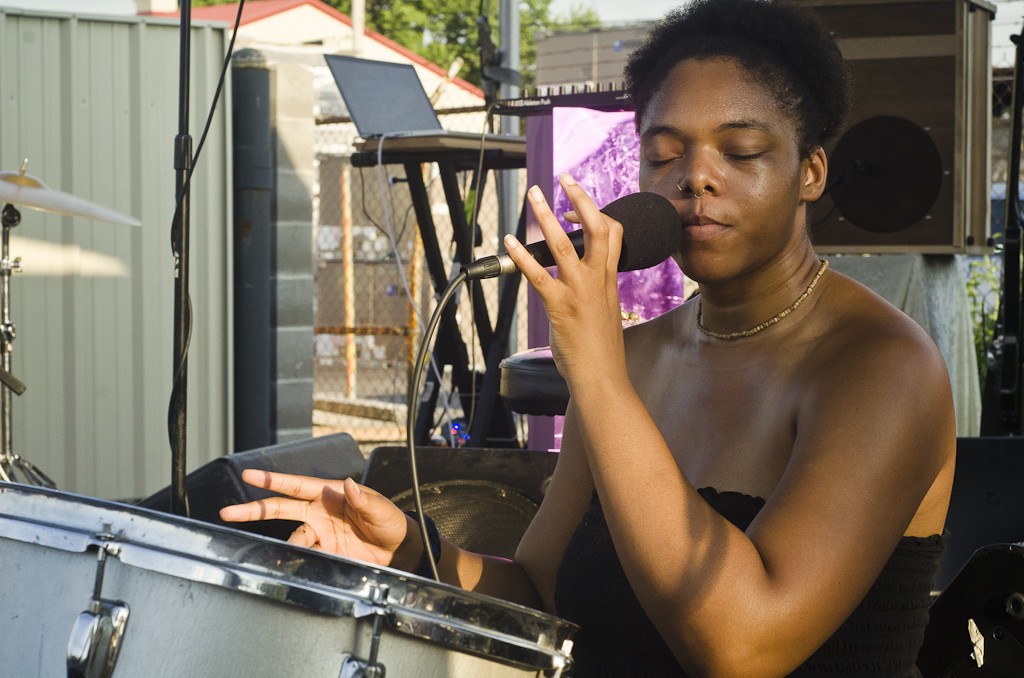 Cher Von – “Kuhh Duuh”
Trying to explain Cher Von’s music in words is like trying to explain the color orange to the blind. To listen to her songs is to embrace the austere beauty of sound. There is something so incredibly organic and alive about “Kuhh Duuh,” a shifting landscape of sampled vocal melodies, sung without any words and scattered with patchwork percussion, that makes it feel like part of the natural world. If there is any sort of narrative, it is one of your own imagination, as Cher Von’s voice serves only as a melodic guide, offering no pretense of story or meaning, opting instead for a primal and often melancholic journey into your own head. As such, her music sounds like a hidden treasure, one that we are unfortunately losing soon, as Von is set to move out of state for her next adventure. She leaves us with a legacy of amazing compositions and a sense that the journey — every journey — is just the start, not the finish.

DNK BDZ FMLY BND – “Dream Girl”
I couldn’t even pretend to tell you what the name of this band is or what it might mean, but I can tell you that this track is a thing of outstanding fuzzed-out shoegaze glory. I can imagine this track popping up at around 1:30 a.m. during a weeknight on MTV back in the day, playing alongside Hum or My Bloody Valentine. As it stands, “Dream Girl” plays like that time that I had to take codeine because I had an especially vicious strain of the flu, and then in a sickness/codeine haze power watched like five episodes of “Full House”; not only does time seem to slow down, but given the tempo changes it feels completely mutable and subjective. You can practically hear the flannel in this song, the ’90s influence is so palpable, which I submit here as a great thing, not just for the sake of nostalgia, but in how wonderfully DNK BDZ FMLY BND blend genres into a psychedelic swirl of imaginative sound and color.

Analog Cannibal — “Chill Out”
The electro funk of Analog Cannibal comes as something of a surprise given the resume of Pat Hume, the composer and primary mover at work here. Gone is the blistering rock fury of Lords or Brainbanger, replaced with the kind of dance funk that you might expect from Prince, albeit as filtered through krautrock acts like Kraftwerk or Cluster, and with what would seem to be the guitar chops of Robert Fripp. If you think that’s an incredibly mixed bag of influences, just wait until you hear “Chill Out,” the debut single from the “Tee Shirt” EP, a release that, as the name would imply, comes in the form of a tee shirt with a download code. Kids these days. What will they think of next? The thing is, Analog Cannibal makes music that lives up to that innovation by creating music that refuses to be labeled, comprised of sounds that are sometimes difficult to identify, but fun to listen to.

Parlour – “Sacks”
With the release of the “River City Rumble” comp, Louisville luminaries Parlour have dug up an unreleased track and it’s pure, instrumental indie gold. Like the best of their long and storied history, this track quietly plods along, never too fast or slow, but sauntering in that goldilocks zone of perfect rhythm and pacing. There is a hypnotic quality to the track that makes it easy to get lost in the moment, as the circular bass and drum work bring you into a comfortable place, while the swirling synths and gently strummed guitar only add to that, punctuated only by a warbly synth lead that comes in a bit later in the track with a sound seemingly plucked straight from your favorite 8-bit Nintendo game. As always, Parlour’s music seethes with emotion, but never boils over, privileging restraint over anything flashy.

Filthy Rich feat. Touch A . C. — “I Just Like To Climb Trees (Filthy Rich Remix)”
Now something of a tradition, the band Karass have rolled out a new collection of remixes, this time for their most recent album “The Donut Industrial Complex.” Titled “Through the Donut Hole,” Karass have assembled an Avengers-level who’s who of musicians and producers to work their respective magic. Perhaps the most refreshing comes courtesy of producer Filthy Rich and emcee Touch AC. Filthy reinvents the track from a Tortoise-influenced jazzy instrumental to a creeping hip-hop dirge. Punctuating that brutal funk are the always-welcome rhymes of Touch AC, one of the most talented rappers in town, still riding high, not only on his recent performance at Forecastle, but also his recent (and incredible) collaboration with Dr. Dundiff. These cats are on point and have made this Karass song their own in a way that revitalizes the concept of the remix.

Joan Shelley – “Over and Even”
There is something wonderfully sublime about the music of Joan Shelley that transcends the moment and takes you to another place. The care and craft put into this composition are remarkable, not only for the delicacy in privileging Shelley’s beautiful voice and lyrical narrative, but in the supporting instrumentation rising from the background like a gentle fog on a cool autumn morning. This is an incredibly durable song, one that holds up well under repeat listens, a positive sign for one of the two lead singles for Shelley’s upcoming album of the same name. The title track, “Over and Even,” is a thing of unmitigated glory, a simple and evocative piece that demands your attention, while it lulls you into a sense of calm and ease.