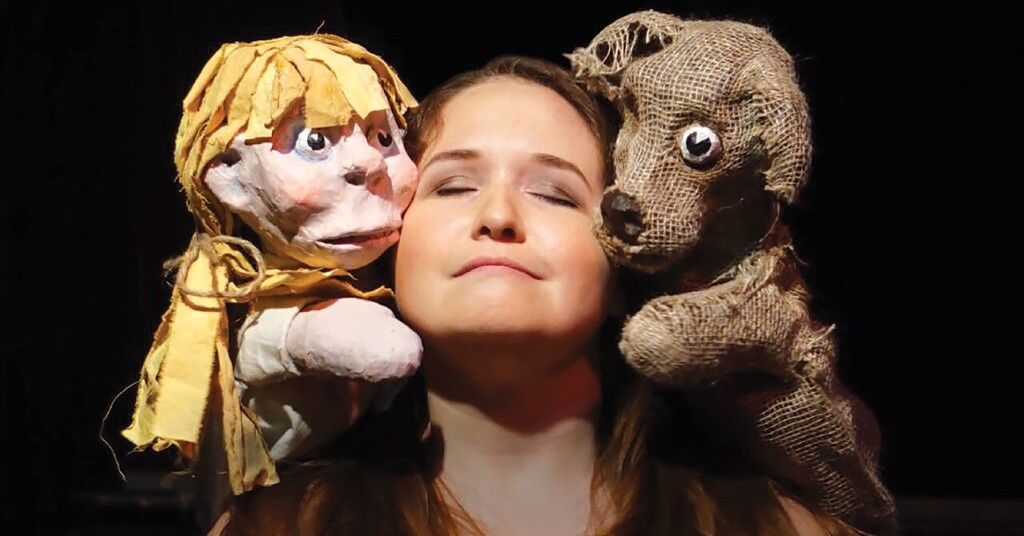 Puppetry is a uniquely theatrical art form. Some kinds of puppets, like the ubiquitous muppets, can be utilized for the screen. Other forms, like shadow puppetry, really only make sense onstage.

It’s my personal belief that the future of theater lies not in aping its cousin, the screen, but in doubling down on what makes it unique.

The art of puppetry, like close-up magic, begs the audience to engage their minds and see how the illusions are being created. It also opens a direct conduit to the deepest part of the soul. Watching something that manifestly is not alive come alive through skill and intelligence gives the audience almost instant and uncontrollable access to the sort of delight many left behind in childhood. Maybe that’s why puppetry gets erroneously defined as being “for kids.”

I have been looking forward to seeing Chicago’s Rough House since I first read they were coming to town. I’m a sucker for high concept theatrics, and Rough House was offering “Sad Songs for Bad People,” an evening of murder ballads performed by puppets.

The problem with high concept is that it takes real skill, often in several media, to make it sing onstage. I’m a sucker for high concept, but I frequently get very disappointed when I see the actual performance.

Often, while deeply engaged in a story being told onstage, I would realize I was hearing flawless four- or five-part harmony. Similarly the physical work being done by the puppeteers was so perfect that I generally forgot they were there — until they started playing actors of course.

“Sad Songs for Bad People” isn’t just a darkly humorous  puppet show, it’s also a beautifully realized meta theatrical statement about why we sing sad songs and what they mean to us. In between numbers, the members of Rough House portrayed a group of puppeteers, fighting with each other, and comically arguing over which songs to sing next. The two stellar musicians who provided accompaniment likewise got in on the action; in between jokes they created their own comic frustrations.

The meta hilarity continued until the exact moment that Rough House decided it was time to break our hearts. With a few words, and a short monologue, it become apparent that the rising tension and the jokes were a cover for an unnamed tragedy that has left the company reeling and heartbroken. The next number had multiple members of the audience openly weeping.

I have to sing praises to the set and lighting designer as well. Rough House brought their own tiny stage and lighting system with them, which they assembled in the gallery portion of Tim Faulkner. Each technical element was every bit as polished and the performance onstage.

It seems  almost crude to mention the puppets themselves as an afterthought, but each one was a tiny work of art. Their beautiful design and construction was no doubt integral to the success of the evening.

I like this show so much that even though I saw it for free as a member of the press, after the lights came up and the actors came out to mingle I paid for my tickets anyway.

Sadly, “Sad Songs” was a one night run. But it will be playing Chicago in October, and personally, I’m planning a road trip.