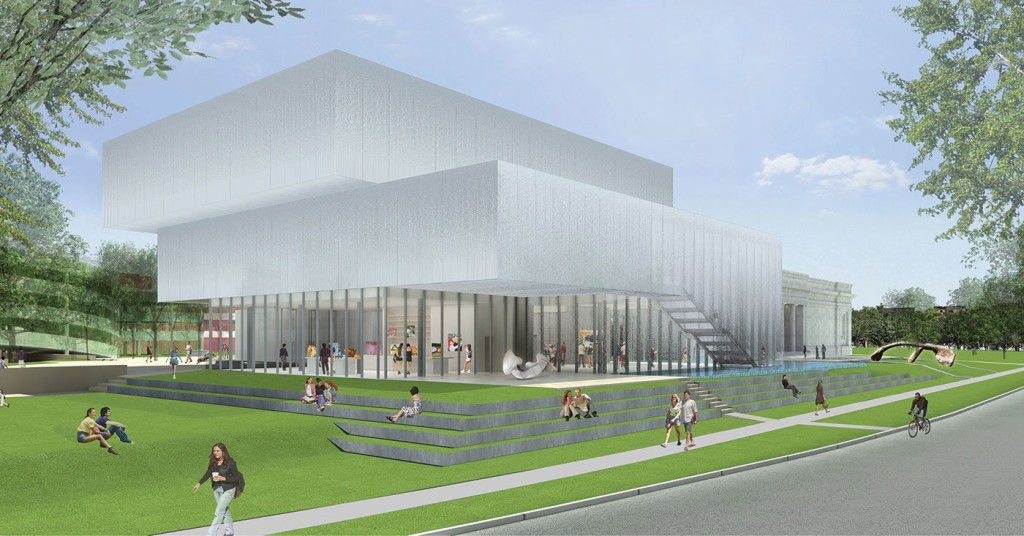 Speed Art MuseumRendering by Why Architecture

Since it seems to be true that the state bird is the (construction) crane, we should go ahead and top the city’s symbol, the fleur-de-lis, with a hard hat. During this latest building blitz, certain visual art venues are undergoing physical changes to be unveiled in the near future. Consider this a scorecard to keep up with the construction, renovations and alterations.

Let’s start with the biggie, the one we’ve been waiting three years for — the Speed Art Museum. It’s set to reopen at 2035 S. Third St. on March 12, 2016. The $60+ million expansion promises to have what we’ve come to expect from an art museum and more.

To refresh your memory, the Speed closed its original building, founded in 1927 as the J.B. Speed Memorial Museum by Hattie Bishop Speed to honor her husband, in 2011. The renovation plans started under former director Charles Venable, with current director Ghislain d’Humieres now leading the project.

The staff moved to 822 E. Market St. The building, where they continued displaying small exhibitions and hosting activities, became known as Local Speed.

The main architect of the expansion is Kulapat Yantrasast of wHY Architecture. His North Building is a glass structure built beside the newly renovated 1927 museum (the 1972 addition was demolished). There will also be a smaller South Building, art park, piazza, cinema and utilities building.

The café, with indoor/outdoor seating, has not been finalized as of publication, but there are plans to find someone local to oversee it. The museum shop will also be revamped. Art Sparks, formerly for children, will now be for “every generation,” d’Humieres says.

All total, the Speed Art Museum will enlarge to approximately 220,000 square feet, giving plenty of room for things like the new Kentucky Gallery and exhibitions of contemporary art. The renovation has been environmentally conscious from the beginning, with plans to apply for the U.S. Green Building Council’s LEED certification.

“One thing I want to add,” he continues. “I’m very impressed by the architect. He carefully thought about Mrs. Speed’s original building. Kulapat has been extremely sensible to respect the heritage of Kentucky and Mrs. Speed and Louisville. That doesn’t happen too often with architects.”

The Speed Art Museum plans to celebrate its reopening is a big way, with 30 hours of public festivities beginning at 10 a.m. on Saturday, March 12.

Formerly known as the Louisville Visual Art Association, the most noticeable change is in their truncated name. They are an association (in title) no more.

But it’s the warehouse in Portland the Louisville Visual Art (LVA) bought earlier this year that has our attention. Over the last few years, the organization had been looking for a single building to house their various components: administration, PUBLIC Gallery, Children’s Fine Art Classes and Open Doors.

“When LVA moved from the Water Tower, LVA’s home for 32 years [in 2012], it relocated to 609 W. Main St.,” says Board President Robert L. Hallenberg. “This space was essentially donated to [us] by Rev. Al Shands [as a] temporary home. … [Developer] Gill Holland asked the Board to consider relocating to Portland … In December 2014, several board members of LVA had a walkthrough of 1538 Lytle, a 32,000 square foot building, and saw a great deal of potential.”

The warehouse was purchased in late February. It’s suitable as a workplace without major changes, so the staff is moving into the building soon, as early as Aug. 31. Future changes are to be determined.

“LVA is in the very early stages of selecting an architect, determining build out costs and uses for the building. More than likely the building will occur in phases as the money is raised,” explains Hallenberg. “The move of LVA’s administrative offices has already created a positive buzz for the staff and Board. Our new home at 1538 will make [us] more assessable to an underserved population that LVA tries to help. We, all at LVA, are excited about this move [and want] to take a leading role in that transition.”

The Kentucky Museum of Art and Craft (KMAC) has just announced they too are in the renovation game. Their building, located at 715 W. Main St., will have some major restructuring beginning in September.

The redesign is about opening up the space, increasing flow patterns and adding some long-wished-for items. The most noticeable changes will be on the first floor. That’s where their expanded art activity MakerSpace will go, along with an event area and café. “The first floor will have a community center feeling,” says executive director and chief curator Aldy Milliken.

According to Milliken, the first thing to be removed in the renovation will be the glass art wall by Ken von Roenn that separates the gallery space from the shop (its new home is still under discussion).

The second floor will continue as exhibition space, although enlarged and more open. The third floor, with its educational area and small permanent collection display, will look similar to what it does now but expanded. The fourth floor houses the administrative offices and will get a bit of redesign as well.

The museum will continue to use the building during the renovation, although most of their exhibitions will be in other locations. “We’re an open museum,” states Milliken. As associate curator Joey Yates explains, “Programming will continue, so we’re not completely closing.”

The 1885 building, with its cast-iron façade, is causing a few preservation concerns. Since Louisville has the second largest concentration of cast-iron storefronts in America, KMAC has to work with Louisville Metro’s Landmarks Commission before it amps up its street recognition.

KMAC’s renovation is by the New York architectural firm Christoff : Finio, who plan to have the building ready by next March.

Don’t worry that 609 W. Main St., the temporary headquarters of LVA, will be vacant for long. In what has become art community musical chairs, KMAC will be using it next for its office space — in the same location where the Kentucky Art and Craft Foundation, KMAC’s predecessor, started in 1981.

Not all of the renovations are limited to buildings. NuLu, a district with an abundance of art galleries as well as restaurants and shops, is also undergoing a facelift in 2016 with an enhanced East Market streetscape.

The renderings for the 10 blocks of Market Street through NuLu show more trees, bike lanes and something the consulting firm CARMAN, a landscape architecture and urban planning company, has labeled “social hubs” or mini-parks.

Art is also part of the area’s renovations. The inaugural public art installation, called “NuLu Art 16,” should be finished around the same time as the streetscape, by the end of 2016 or early 2017.

Two medians will also be installed in the 300 and 800 blocks, thus reducing the number of traffic lanes in these areas. Since the planting of more trees is an important component in the overall concept, these tree-filled “islands” will be part of the solution, leading up to plans to apply for LEED certification.

One of the business owners who doesn’t like these proposed medians is Paul Paletti, of the self-title photography gallery and the law firm Sturm, Paletti & Wilson at 713 E. Market St. “One of my major concerns is that they will … [constrict] the traffic flow,” he explains. “Market Street is a major ingress and egress route, and this will significantly strangle the traffic. Drivers will tend to avoid it, cutting down on the traffic which feeds the local businesses, and which has helped make this area a vibrant destination. When I went to a public meeting about a year ago to speak out against the central island, we were assured that this was off the table completely. Then a few months ago, attending a reception celebrating the plans, there it was again.”

Joyce Garner, of garner narrative contemporary fine art at 642 E. Market St., has plenty of wishes of her own for the area. “Since the NuLu Streetscape project is in a summer lull, [with] August off, facts about what will happen are hard to come by. There will be a median in the 800 block, which I hope will slow traffic a bit, [making NuLu] a pedestrian-friendly area. I hope as well that NuLu will be able to handle storm water in a green way, with trees and landscape to cool this part of the city in the summers, and that lighting improvements will make the area welcoming at night. I hope for some wonderful public art.”

It is a good thing when artists can get in on all this construction too.

Traditionally, creatives congregate in areas of cheaper rents for their studios and living spaces. Louisville is well known for a less expensive form of housing, the shotgun. With the largest number of shotgun houses in the nation, it seems that renovating these rectangular structures for artists’ use would be a no-brainer.

Gill Holland apparently thought so. In a variation of “build it and they will come,” he believed more artists would move to Portland, an area with an abundance of shotgun houses, if offered renovated, low-cost housing.

Six houses are finished. “Lytle and 17th are completed and occupied, and [one on] Bank Street is [in] pre-renovation,” according to Stephanie Kertis, Managing Director of the Portland Investment Initiative.

There is also a plan to build new shotgun-style buildings in the vacant lots. This is another case of Louisville’s art community musical chairs, as one of the designers is Kulapat Yantrasast of wHY Architecture, the primary architect of the Speed Art Museum’s renovation.

Portland already has a little art renaissance happening. The Tim Faulkner Gallery is there at 1512 Portland Ave. and, as mentioned, LVA is moving in nearby. Definitely a case of the more, the merrier. •