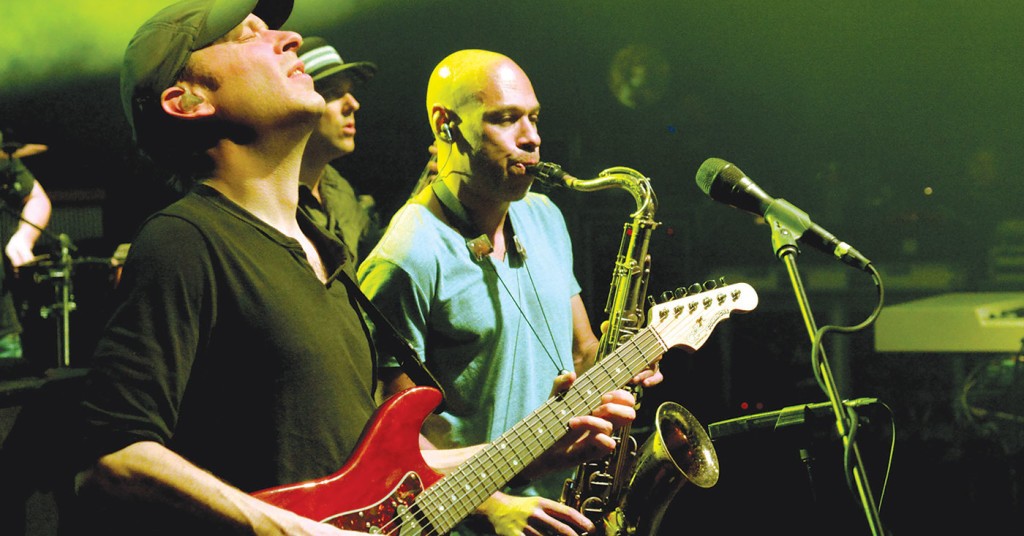 From the parking lot to the headlining stage, Umphrey’s McGee never ceased to bring music to the people. That relentlessness to perform is part of what keeps Umphrey’s in the game — that, and the community of fans who’ve shown up to see them “eternally on tour” since forming at Notre Dame in 1997.

“At the time, we were trying to do anything and everything to get our name out there,” Brendan Bayliss tells LEO. The Captain, as he’s known to be called, was talking about a famous late-night gig from 1999. The college-age Umphrey’s McGee had set up inside of a vacant barn on the campgrounds at Dead Creek in Noblesville, Indiana — a two hour drive from their home of South Bend — where 10,000 people had congregated to see a different band (rhymes with fish). Using a gas generator, the five-piece Umphrey’s McGee played half of a set. And when it ran out of gas, they looked for more.

Fifteen years later people still approach Bayliss to ask about that night. Those firsthand accounts are the only indicators of how long or what even they played with no way to recall the blurry details, since none of the live shows were digitally archived until 2006. Hundreds of set lists never to be repeated twice.

“You never know,” Bayliss says. “Sometimes you’ll just be driving in the car and a song will pop up. Honestly, when we first started that’s how we [got it]. We did a lot of covers because we’d be driving in a van for 10 hours.”

Umphrey’s live shows are memorable and plentiful without a doubt. It’s a sort of package deal: two sets of music and a spectacular light show under the verbal agreement that “we’re gonna have a good time tonight.” Umphrey’s might also take requests or just break into “A Love Supreme” or a Huey Lewis clip (recently Ween and Pink Floyd have been incorporated). Whatever drives the live energy Umphrey’s thrives on in the moment, its combined purveyors — Bayliss on lead vocals and guitar, bassist Ryan Stasik, guitarist Jake Cinninger, keyboardist Joel Cummins, and drummer Kris Myers joined by percussionist Andy Farag — weave through perpetual grooves and seamless instrumental digressions, honed by tight direction and mutual emotions.

That fleeting energy lives on “The London Session,” the newest release compiling Umphrey’s pinnacle day in Abbey Road Studios last year. In the course of 12 highly-concentrated, mind-blowing, career-legitimizing hours, they took away a newfound confidence. Walking out onto the steps of 3 Abbey Road gave Bayliss a comforting assurance: “And I knew for the rest of my life I’d have something that no one could take away from me, and I could show my kids”

Out of the 15 Beatles songs in Umphrey’s rotation, “I Want You (She’s So Heavy)” made it on the album after much deliberation. A lifelong Beatles fan, Bayliss said it was lucky they even pulled it off. They almost didn’t do it. “It’s like going into a church and preaching a different gospel,” he says. Bayliss informs me they’ve written seven songs since then, hinting at a couple previews for this upcoming Louisville date.

Umphrey’s McGee never ceases to bring music to the people and they keep it interesting, too. In addition to live streaming all of the shows and offering downloads of them in any format you like, “Headphones & Snowcones” adds a whole new dimension to the live experience. For a fee, concert attendees may rent a pair of wireless snowcones linked to a live, straight-from-the-board feed. That also includes a download of the concert, which would be a CD if this were still 2003. The band is probably glad it’s not.

“We’re playing 12 less shows than we did last year, which says a lot,” Bayliss said. Is that comfortable? “To be totally honest, yes. We’re in a good spot. We don’t owe anybody any money. We have our own record company, so we’re not working for anybody but ourselves. We’re at the point now where everybody’s on health insurance.” He pauses. “But that doesn’t mean we’re not trying harder. How about that?”