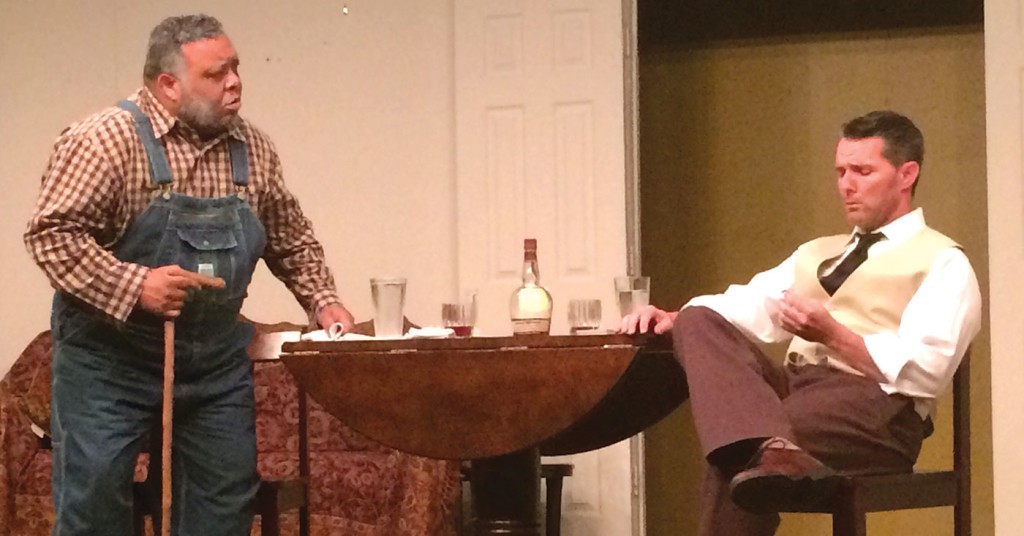 Over the last several years, the Kentucky Playwrights Workshop has staked out quite a strong niche as an incubator of new plays. It regularly sponsors competitions, conferences, and workshops for Kentucky writers.  Since 2012, it’s presented annual programs of new works (by Kentuckians) at the Kentucky State Fair.

This past year, the organization went a step further. Using an anonymous grant, the group commissioned three new 30-minute plays — on the theme “The Day After” — from well-known Kentucky playwrights, then supported the playwrights through an extensive process, including staged readings and dramaturgical consultations, that culminated last weekend with fully staged productions at The Bard’s Town Theatre.

It was a risky enterprise, but the results were pretty satisfying. Two of the plays (all three of which were directed by Kristi Johnson) were superb, and if the third was a failure, it was at least a failure in an ambitious cause.

My favorite of the group was “The Two Villages” by Richard Cavendish (pen name of Russell R. Reschenbach). The title refers to a series of watercolors by Kentucky impressionist watercolorist Paul Sawyier — who in turn was invoking a poem by the 19th century poet Rose Terry Cooke.

The time is a summer night in 1910. The setting, Sawyier’s houseboat, is moored on a stretch of the Kentucky River that’s near Shakertown and has a fine view of High Bridge.

The story centers on the tumultuous romantic relationship between Sawyier (Jeff Armstrong) and Mayme Bull (Ranelle Rigney). They’ve been in relationship for decades (and engaged for quite a long time), but, in truth, both have plausible reasons for not setting a date. The playwright packs a lot of beautifully textured language into this half-hour — not a minute is wasted. And not a minute is predictable. One moment, Sawyier and Bull are looking at the river and evoking its beauty in poetic language inspired by Sawyier’s works, the next they’re battling fiercely over ancient slights or the fact that Sawyier has recently been seen in the company of a much younger woman. Armstrong and Rigney gave a marvelous, uninhibited performance — and Gordon Earl Thomas, in a cameo as Uncle Gus (a framing character who helps set and resolve the action) gave such charming depth to a stock character (the wise old black man) that I hope to see him in in a more fully developed role.

“Something Must Be Done” by George McGee, is a droll comedy propelled by the perfectly understandable — and totally irrational — actions of Mitch (Scott West), who one evening gets caught up in an online auction, and suddenly finds himself the winner of a lighthouse. And it’s not, as his wife Eve (Ranelle Rigney) initially thinks, a decorative lighthouse; it’s the real thing, at 90+ foot tall cylinder on the Michigan coast.

It’s the kind of event that might raise questions about a person’s sanity — and the couple’s daughter, Lisa (Casey Kindler) immediately summons her boyfriend, volunteer fireman Jack (Nicolas Cox) to investigate. Then Mitch’s brother, Stephen, an attorney, shows up to conduct an inquiry. And suddenly we have a madcap overlay of verbal volleys as the various characters talk over and past one another about a vast series of topics (including the virtues of round beds and the problem of calculating the living space available in a cylindrical building). Then, just as the verbal jousting reaches its apex, it’s time for a climax involving piratical swordplay.

Alas, Nancy Gall-Clayton’s “Landscape of Tomorrow” wasn’t as successful as the other two plays. Her subject was bold: an examination of teen suicide, both its aftermath and its genesis. And her approach — a reverse chronology that begins after the suicide and slips backwards through the things that preceded the event — was an interesting device. But the play never escapes from what might be a too-cautious sensitivity to the admittedly challenging subject. And the director and performers never found a comfortable pace. Nicolas Cox plays Rick, a high school student who kills himself after impregnating his girlfriend Jewell (Emily Eader). The youngsters come from different milieus. Jewell is a talented student whose single mother is a high-performing attorney with little time to spare for her daughter. Rick is a poor student whose single mother does brutally difficult domestic work at a motel. And though the play pulls lots of threads (class, gender, parenting and the like) at this point in its development, the script feels more like a case study than a play. It’s an important case study, though, and the core of a powerful play is in there, somewhere. It’s a credit to those involved that they’ve brought such a risky project this far.

Looking ahead, the Kentucky Playwrights Workshop’s New Play Series of 2015 features five new plays by Kentucky women.  Those will be performed at the Kentucky State Fair on Aug. 24 at 7 p.m. in the North Wing on the Performing Arts Showcase Stage. The line-up: “Flight Path,” by A.K. Forbes (Fort Thomas); “Namaste,” by Stephanie Porter (Russell County); “Rose Upon a White Gait,” by Tammy Brady (Fort Thomas); “Zombie Love,” by Jennifer Johnson (Ashland) and “Wash Day,” by Sarah Diamond Burroway (Ashland).