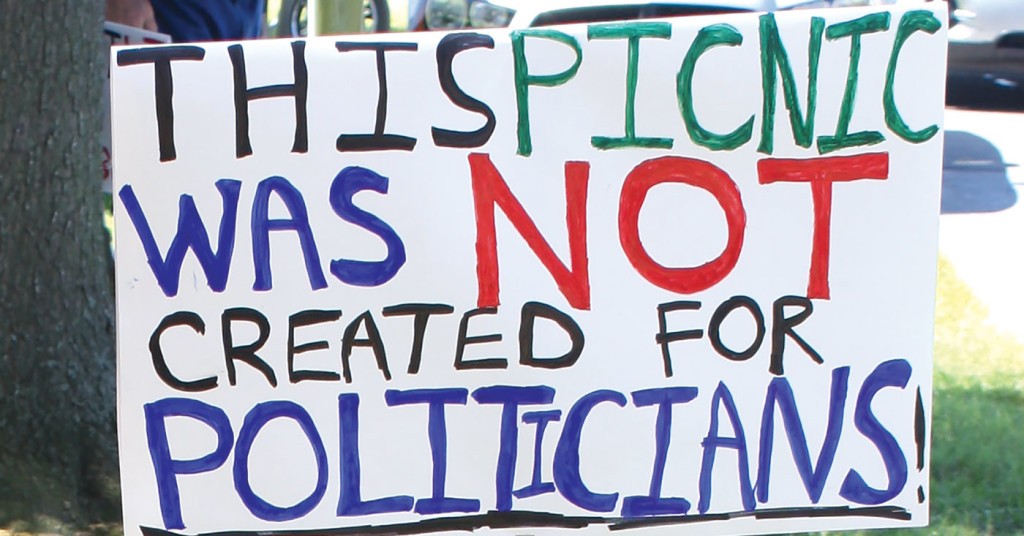 Sign posted outside the Gatewood Legacy TentPhoto by Amanda Hay

There is no more visceral and honest a display of Kentucky politics in action than the political theater at Fancy Farm, the annual Western Kentucky picnic that features barbecued pork and mutton by the pound and a sheer tonnage of the political process in action. For those unfamiliar with the storied political picnic that has existed longer than Mitch McConnell has been in office (Yes. Really.), imagine a place where theater, pageantry, politicians and other noisemakers converge to fan the flames of grassroots chicanery and to sling insults and to have insults slung at them. The nice thing about an event like Fancy Farm is that even with such large marquee speakers as McConnell and Governor Beshear, there’s plenty of room for a bitter agriculture commissioner, environmentalists, tea partyers, hardcore constituents from both major parties, Confederate flag supporters, union members, Common Core protestors, pro-medical marijuana advocates and issue voters of all ilks.

The names of those present were as conspicuous as the names of those absent. During his warm-up roast before the afternoon’s political speechifying, Kentucky Sports Radio personality Matt Jones noted the absence of senatorial and presidential    candidate Rand Paul. “Come on home,” Jones said, alluding to the senator’s more than statistical slump in the GOP polls.  “Come on home. You’re not going to win.” Sen. Paul did attend last year’s picnic, although he did get in some hot water with event organizers back in 2010 for calling the event — which also serves as a fundraiser for St. Jerome Catholic Church — a “wild picnic.”

Senate Majority Leader McConnell was in attendance, however. The question on a lot of people’s minds was whether he would swallow his kelly green socked foot and endorse his party’s candidate for the big chair in Frankfort. During what some considered a vitriolic primary, a McConnell television ad labeled Bevin “an East Coast con man,” which, in retrospect, handed the Kentucky Democratic Party one of its best campaign commercial slogans to date.

In spite of this early attempt to throw support behind Agricultural Commissioner James Comer’s bid for the nomination, McConnell — who also called Bevin’s stump speech at a cockfight in Corbin “of the most disqualifying moments in Kentucky political history” — took the podium and publicly threw his support behind the entire Republican ticket. Even before he touted his own record in the Senate and announced the Senate would entertain a vote this past Monday to defund Planned Parenthood on the heels of a now debunked internet meme accusing the women’s health organization of selling baby parts, the Senate Majority Leader, not surprisingly, gave the largely conservative crowd what it was waiting for. “If you want the candidate with better ideas, vote for Matt Bevin. If you want the candidate with better hair, vote for Conway.”

When the time came for the candidates to speak, Democratic candidate for governor Jack Conway spoke first. After touting his record as state attorney general, which he characterized as one of “promises made and promises kept,” he promised that his focus as governor would be “jobs, jobs and more good paying jobs.” However, Conway’s biggest selling point — apart from the ammunition provided by the GOP — was “I am from Kentucky. I have delivered for Kentucky, and I have a plan for Kentucky.”

That detail about birthplace was a common theme in the Democratic candidates’ speeches. Hearing it correctly, it appears that birth place has something to do with political birth right — as if Bevin, whose list of political and personal gaffs rivals Vice President Biden’s in depth if not in breadth, needed a Yankee brand to make him that much more of a political outsider in eyes of his Tea Party base.  “Matt Bevin,” Conway said, “is not from Kentucky. He lies to Kentucky. And he is wrong for Kentucky.” The candidate went on to state his opponent’s opposition to increasing the minimum wage and to early childhood education; Conway also claimed Bevin would take money from public schools and remove 500,000 Kentuckians from insurance rolls.

When Conway’s four minutes were up, Bevin took the stage. Rather than go after his opponent’s party ideology, or even try to marry him to President Obama — which worked so well against Alison Lundergan Grimes that the Kentucky GOP super PACs are doing it again in television ads against Conway — Bevin thanked and backhandedly criticized Fancy Farm, its organizers and the audience. “The one thing that discourages me about this process,” said the candidate, “is that we’re celebrating the very worst parts of the political process. We are celebrating our divisions, and we are doing it in a childish way.”

It’s entirely possible that Bevin was alluding to the large cardboard signs depicting him as Pinocchio telling a lie. For a while Bevin certainly had more supporters at Fancy Farm — from anti-Common Core and “right-to-work” advocates, to anti-abortion and pro-Jefferson Davis crusaders, in addition to those simply carrying his sign or wearing one of his T-shirts — Conway’s supporters were far more theatrical.

Conway supporters dressed up as chickens and wearing boxing gloves wandered through the crowd all day, mock cock fighting to remind everyone of Bevin’s Corbin campaign stop. Others carried signs highlighting Bevin’s non-attendance to MIT and his delinquent tax bills in the Northeast. One person went as far as to don some brightly colored lederhosen and a long nose.

Whatever childishness Bevin was bemoaning, he spent more time preaching against that than he did making his positions clear or defending against his opponent and the heart of his own party. When his attempt to chastise the audience didn’t work — not even with his own supporters — he insisted on leading the crowd in the Pledge of Allegiance. After that, he offered a social studies lesson about the American flag and the Kentucky state motto.

If Conway is coming off too smooth and moneyed to connect to grassroots Democrats, Bevin as a unifying conservative force continues to be problematic. While it’s clear that the GOP has accepted their “East Coast con man” as the chosen one who will finally unseat the Democratic Party from the Kentucky Governor’s mansion, the candidate speaks more like a third-party candidate than a Republican fast tracker: “The idea of a good paying job is not a Republican thing or a Democrat thing. The idea of having quality education for our young people, taught by qualified teachers … this is not a Democrat thing or a Republican thing.”

The presence of third-party candidates at Fancy Farm has been historically problematic, to say the least. The event clearly caters to the two-party system, proven by the absence of independent gubernatorial candidate Drew Curtis. Curtis, owner of FARK.com, a news aggregate site, was at Fancy Farm to meet potential voters, talk to the media and walk straight into the fire pit of Kentucky politics. According to the text of the speech he was not allowed to give at the podium, provided to LEO by his campaign, he believes Kentucky can do better than either Conway or Bevin. “They don’t have a single original idea between ‘em. No one is excited about either one of them.”

The last third-party candidate who was allowed to speak at Fancy Farm was Kentucky icon Gatewood Galbraith in 2011, and that was only after he had achieved such a public status that it was impossible  to exclude him. Fancy Farm has been a political tradition since former Lt. Gov. Happy Chandler went at the end of his 1931 campaign, and from that time, the political label has been more of a draw than the fundraising event it’s supposed to be or the barbecued mutton that is difficult to find anywhere in the state outside of Western Kentucky.

Bevin’s insistence that the political poking back and forth was childish does little to diminish the fact that, in spite of — and maybe even because of — the massive political footprint, the annual event at Fancy Farm might be one of the most civilized political gatherings in an era in which politics is anything but civil. At any given moment there were Conway supporters sharing very cramped space with Bevin supporters, and pro-Jefferson Davis/Confederate flag groups politely sharing grass with liberal student-loan-debt protestors. Supporters from opposite sides of the gubernatorial race smiled, shook hands and exchanged pleasantries in the heat. Children as young as 9 or 10 engaged in political discussions with older supporters from opposing ideological camps.

One political point that did not escape notice and is of historical significance was that Bevin’s running mate, Jenean M. Hampton, was the first woman of color to ever speak at the podium. “I know for some of you, I’m an anomaly. I’m a black conservative. So you’ll just have to judge me on the content of my character, my qualifications and my experience.”

A sign next to the Gatewood Legacy tent out in the parking area admonished those in attendance to remember that the picnic was not made for politicians. The first Fancy Farm picnic in 1880 was meant to be a family gathering, a chance for the community to come together and celebrate being a community. That Happy Chandler saw it as a good luck charm and that others seeking political office always chase after other people’s luck has done nothing to erase the underlying civility of people passionately engaging in the politics of their choice. For all of Conway’s attempts to make his Union County birthplace into a political birthright, his supporters carried his campaign’s water that day — figuratively if not literally in 95 degree heat — while he pushed his candidacy without explaining why he’s more than just the next in a long line of Democrats. And while Bevin was officially embraced in public by the political party that tried to avoid any connection with him, his patriotic ploy sounded more like desperate salesmanship than political promise. But in the midst of all that political gander pulling, the event provided a chance for everyone to air their politics and have some fun at the same time.