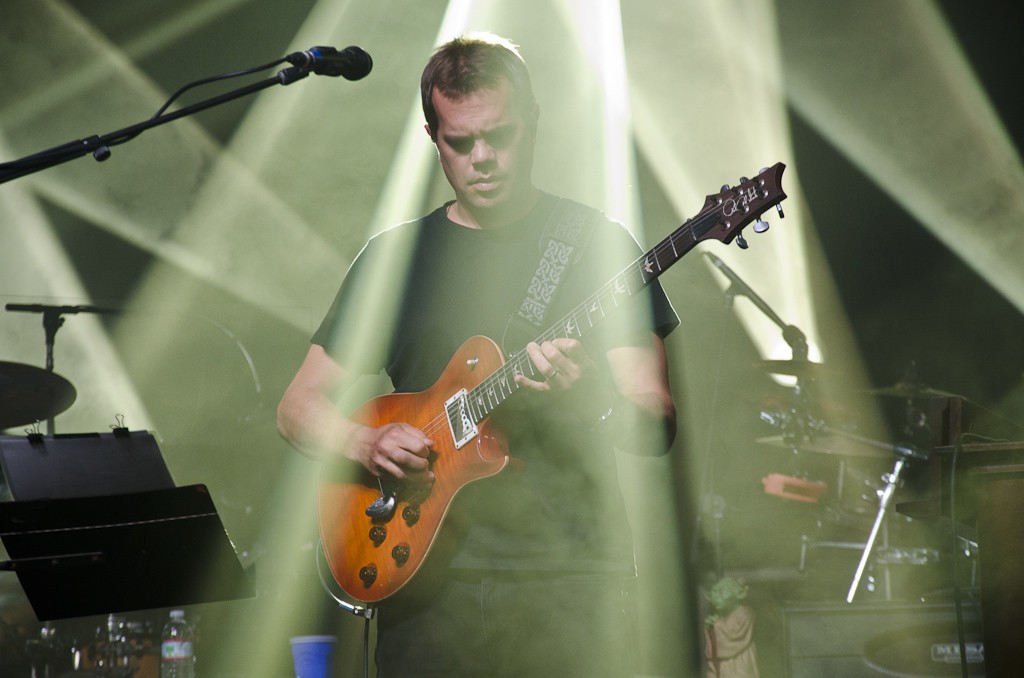 [All photos by Nik Vechery]

The sun set at 8:38 p.m. and Umphrey’s McGee was already on stage playing somewhere along “Andy’s Last Beer,” a crowd favorite from one of their first albums, “Local Band Does OK.” But the ferocity of last night’s performance at Iroquois Amphitheater was more than OK; Umphrey’s was in full command.

The two-set performance looked to the past for inspiration as the first half condensed select tracks from 2000s albums like “Jimmy Stewart” (opener “The Crooked One,” “Intentions Clear”) and “Songs For Older Women” (“Thin Air,” and “Hangover” to later close the second set). A few more including “The Bottom Half” continued the line of familiar jams right before a power issue caused them to take a short break. It definitely felt old-school, Bayliss showing his open palm to the crowd in a wholesome gesture to bear with them. A five-minute lull. No time wasted easing back into things with “Educated Guess,” a recent one from last year’s “Similar Skin,” oozing of prog-metal pop swag as Umphrey’s jammed out the closer of the evening’s first set. Someplace in the midst of that, Bayliss’s guitar mocked a wailing horn, combined with Andy Farag’s palm-fisted percussions, and for a moment I felt as if I’d stepped into a jazz hall in 1974 to spectate Miles Davis taking turns with Al Foster. Maybe that’s an overstatement. It was transporting, to say the least.

Intermission was “Appetite For Destruction” and Umphrey’s returned not long after “Paradise City” put everyone in a good mood. The stage lit once again by color and sound, “Miss Tinkles Overture” took hold. I honestly don’t remember if it was during the tail-end of this or “Ocean Billy” that the orbital groove got lost, and instead played on the pulse of that moment. Cinninger and Bayliss executed it accordingly, strumming open chords to resound back and forth.

Ears perked to the familiar “Breathe” chords originally played by Pink Floyd. Umphrey’s went dub very much like the version heard on Easy Star All-Star’s tribute album Dub Side of the Moon. By nature it launched into spacey rhythmic intensity. When Umphrey’s goes there, listeners must hold on to the nearest piece of groove to make it through. I surmised that tendency to operate on contrasting velocities is common thread — one must survive the penetration to reach the full, stoney immersion. In that, you accept the number of beats per minute is equal to the number of flashing lightbulbs on stage. And you wait for the familiar chords to return.

A full recording of the performance is available to download via Umphreys.com. Only a few dates left on this summer tour: http://umphreys.com/tour/ — View the complete setlist below.