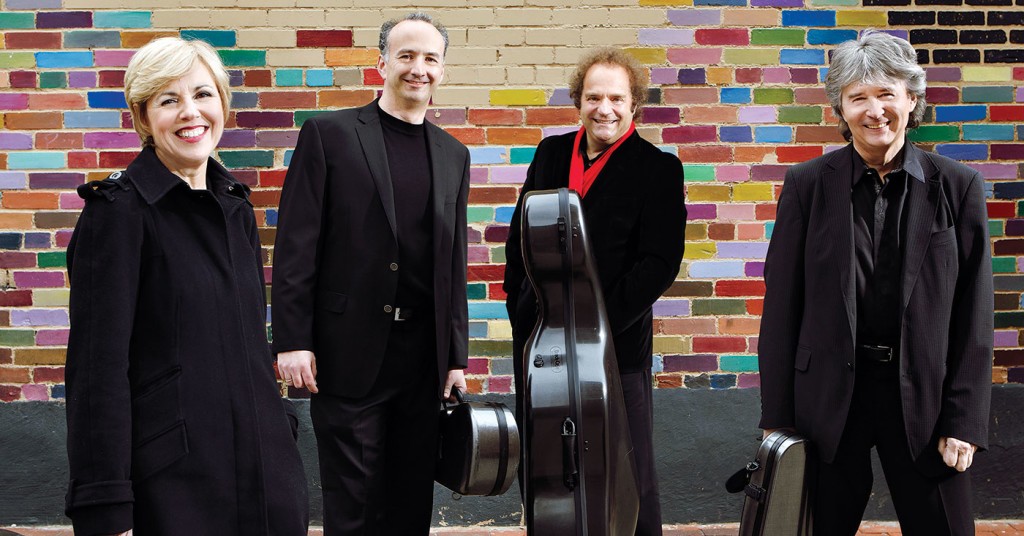 One could make a case that the Chamber Music Society of Louisville is the finest, least-known performing arts organization in Louisville. Now in its 77th season of bringing to the city the top string quartets and similar small-sized groups, the Chamber Music Society series remains a kind of boutique jewel of the local classical music scene. Something almost unknown to the general public, but adored by its patrons.

Of course, the ticket manager of the Chamber Music Society might dispute the notion that few people attend the concerts … if the group had a ticket manager.

And the Society’s publicist might disagree with the notion that the Chamber Music Society is largely unknown by the general public … if they had a publicist.

There are, in fact, many things the Chamber Music Society does not have. But one of those things is not music. The music is consistently top notch — with a concert schedule always headed by an internationally famed string quartet. This year, it’s the Takács String Quartet. The season includes appearances by an up-and-comer or two, with other ensembles of varying sizes and instrumentations balancing traditional repertoire with something fresh, sometimes even a bit “out there.”

When they turn these acts loose on the Comstock Hall stage, in the University of Louisville School of Music, the sound comes alive.

And I do mean “in” the School of Music, as inside, because Comstock Hall is literally hidden inside an otherwise standard-looking classroom building. There is not one sign that says, “Hidden within these concrete walls is the finest acoustics concert hall in town.”

But if you do happen to find it, you will be rewarded.

“You can hear a pin drop, the hall is so marvelous,” says Chamber Music Society board member Jackie Rosky. “It’s just the right size for chamber music, with a very, very live wooden floor.”

In a musical format that operates without amplifiers and festival-sized speakers, the pure sound produced by a player is everything. If a player from, say, the Guarnerius String Quartet bows a 300-year-old Giuseppe Guarneri violin on the Comstock Stage (as has happened), we hear every bit of the sound, no matter what volume it is played. Maybe only a whisper, as Rosky’s pin touching down. Most concert halls try for a live floor, but only a few succeed in finding real resonance. Like a violin top itself — spruce wood vibrating, with the sound post placed just right for clarity.

The Chamber Music Society’s concerts were originally staged in the Playhouse at UofL (1938-76). That’s the familiar white wooden theater now nestled in the fork of Second and Third Streets at Avery Street. The series played at Spalding College Auditorium from 1976-80, before finding its current home in the School of Music.

From its founding in 1938 by local music devotees, the Chamber Music Society has brought in the biggest acts of the smallest size. The Budapest String Quartet anchored the early years, scheduling Louisville on its annual American tours beginning in 1939. In the 1950s, the Julliard String Quartet, regarded as North America’s finest, cycled in as a regular act for the series. Its most recent appearance came in 2013, for the society’s 75th anniversary celebration. The Emerson String Quartet, which might lead in popularity today, appeared in 2014.

How does the Society pay for the talent it brings to town?

The answer is: barely. Tickets are priced at $25 (with music school students free), which hardly makes a dent in the payroll expenditure. Mostly a few dedicated donors pick up the tab. There’s an old legend that at the end of each season, one patron would call up and ask, “Well, how much did we go in the hole?” Then write a check to cover the deficit.

It’s a happy model, but the Chamber Music Society has a tradition of not worrying too much about costs. Almost every chore required to present the concerts is accomplished by volunteers, who simply love the music.

Last year, in a bid to add a live spark to its operating engine, the Chamber Music Society tapped Andrew Fleischman as its president. “More like they needed a president, and I was the last one to get out of the room,” laughs Fleischman, a Louisville attorney who was a music major in college, and never lost interest. Fleischman recently headed the search committee that signed Teddy Abrams as the new music director of the Louisville Orchestra. But he doesn’t think the Chamber Music Society is in need of such an earthshaking move. A simpler idea he likes is to give free tickets to music instructors to give to their students.

The biggest boost for the Chamber Music Society might lie in a national swell of interest in small musical niches. As people today would rather hike pristine park trails than ride the tour bus, there’s a real interest in small, listenable-sized performing arts. The groups that play here perform year-round schedules at some of music’s most glittering venues, as well as well as in chamber-sized small concert halls at colleges. And some occasionally in downstairs music clubs, where their contemporaries enjoy listening to music.

“Being a symphony musician can be a difficult thing today, but the small groups that have flexibility can really give it a go,” says Fleischman. “There are some really talented young groups, and that’s one thing we want to get on our radar screen: Who are the exciting young musicians out there today?”

In that vein, the Chamber Music Society partnered with the Clifton Center last year to bring in the group Brooklyn Rider for a concert at Clifton’s auditorium. Brooklyn Rider performs commissioned pieces that range from traditional to crossing over to other styles. “It got us out of our normal Sunday at three o’clock format for once,” says Fleischman. “We wanted to see what would happen, maybe reach a younger, or just a different audience.”

This season, in what is surely a coincidence, but perhaps a happy one, the Takács and the St. Lawrence Quartet are both scheduled to perform Haydn’s Quartet in C Major, Opus 74, No. 1 — the 59th of 70 quartets penned by Haydn. Takács originated in Budapest, but now is in residence at the University of Colorado in Boulder. The St. Lawrence was born in Canada, and now makes its home at Stanford University in California. Audiences will get to compare interpretations. That’s something that almost never occurs in the same season on the same stage (Takács perform on November 22 and the St. Lawrence Quartet on April 24).

Haydn (1732-1809) did not invent the string quartet, but was certainly the originating genius of the genre. The Austrian composer realized the potential of an ensemble of four distinctive voices — two violins, a viola and a cello – providing enough instrumentation to perform an intricate score, yet with each voice distinctly heard.

“People might think they’ll find chamber music as a niche that’s too sophisticated,” says Rosky. “But my theory is it’s easy to appreciate if you just go sit and enjoy. And when you hear music performed by musicians of this caliber, it becomes easy to understand and appreciate.”

The Chamber Music Society series kicks off October 25, with the trio of Liba Shacht, violin; John Sharp, cello; and Milana Pavchinskaya, piano. Takács is slated for November 22. On February 7, the Society gets another new collaboration from Chicago Pro Musica, a frequent contributor to the series. Chicago Pro Musica is manned by musicians from the Chicago Symphony, who form up in different instrumentations to present new arrangements of new or little-heard works. This edition from Pro Musica includes flute, clarinet, violin and piano. Sounds interesting. New to the series is the Lorelei Ensemble of female singers, scheduled March 20. The series concludes April 24 with the St. Lawrence Quartet.