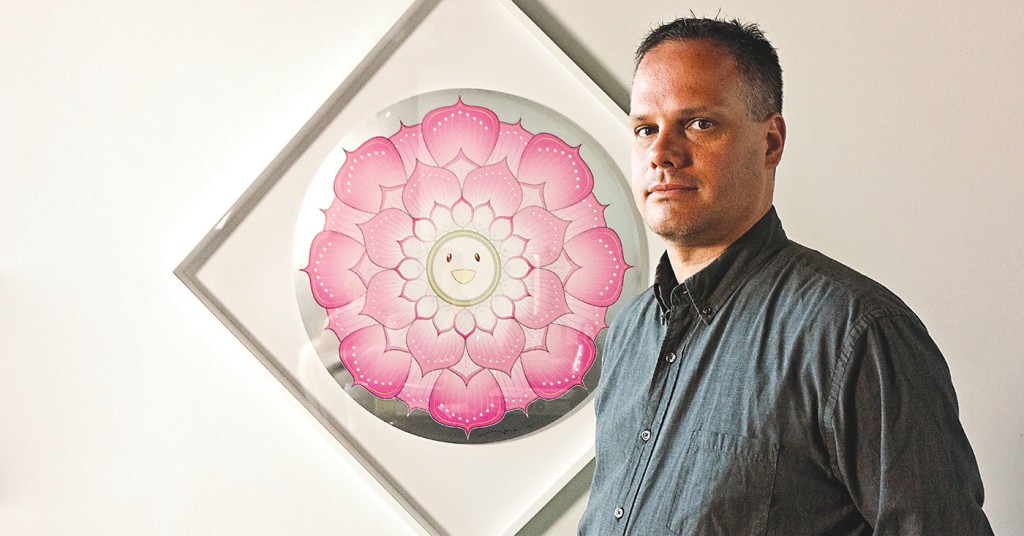 In Louisville there exists a temple. It’s a holy place where high ceilings and open spaces stand as a shrine for works by artists considered outside of the mainstream. These are makers who find inspiration in pop and surrealist themes while using street art techniques to showcase a sarcastic anti-establishment anger. This is the home of the archangels of art. And watching over them is the temples founder, art collector Jason Clark, president of VIA Studio.

The history of Clark’s temple begins with his initial interests in art. Neither a lover nor a hater, high art was, at best, inconsequential and irrelevant. That is until he began to see new artworks that reminded him of his early days creating fliers for local bands. That appealed to his design sensibilities, as well as his rebellious streak. It was upon hearing these artists collective voices that Clark realized that this work spoke to his generation like no other.

After educating himself on the art market, Clark used his free time to research other makers that appealed to his newfound artistic tastes. When he came across works he liked, he snatched pieces up, because luckily it was early in the artists’ careers, and the work was still reasonably priced. As his collection grew, he was able to reinvest in newer and more profound artwork by selling some of his early collection to other like-minded art enthusiasts. Ultimately, Clark’s collection, held in the offices of VIA Studio, became the home to several works by the artist Obey, famous for his Obama “Hope” image; a multitude of original prints by the duo Faile; a watercolor of a foreboding owl by Hua Tunan; an anime-inspired flower by Takashi Murakami, plus many others. But the holy relic of the collection is original print by the enigmatic Banksy. This masterpiece depicts a tribe of natives stalking a herd of shopping carts across a white landscape. It is the true heart of the temple.

What Clark has done is prove that being a good collector isn’t just about amassing works that are fashionable and trendy. It’s also about understanding the market, having foresight on artistic advances and developing an eye for timeless art. To accumulate a collection consisting of some of the most visually stunning and profoundly stimulating artists of our time is something to be proud of, but what he has also done is build an important example of the ever-evolving art world.