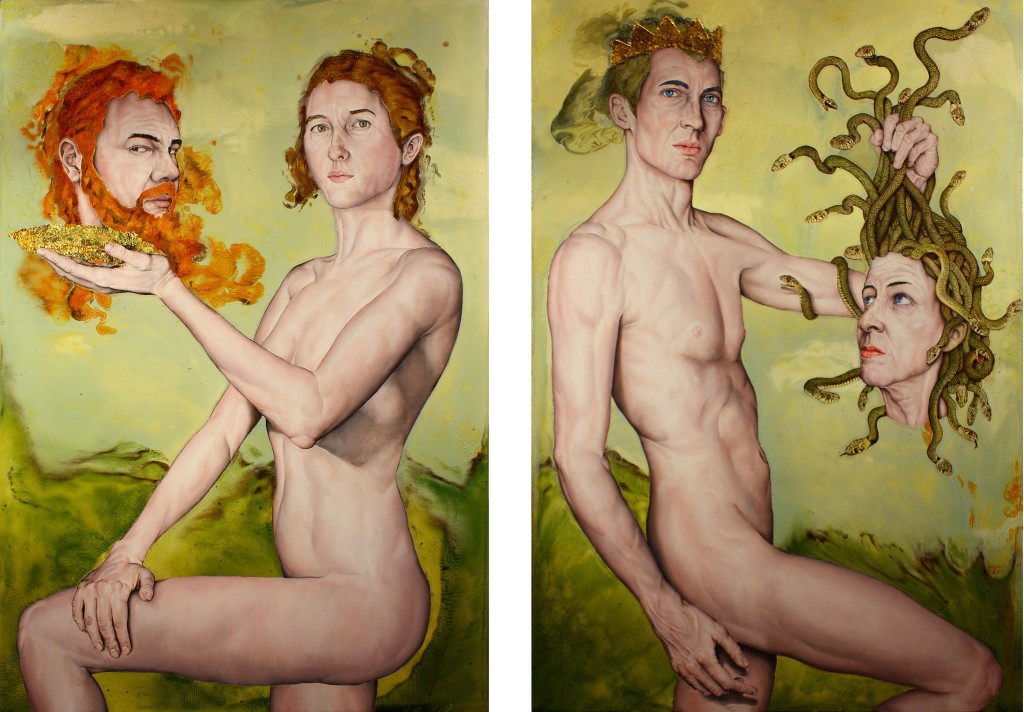 [The above image is “Severance” by James Russell May. The image on the homepage is “The Messenger.”]

James Russell May (jamesrussellmay.com) is an artist whose work is best viewed in person so you can marvel at his detail and technique. Your first stop should be the Tim Faulkner Gallery since they represent him. If you are out and about during the Louisville Visual Art / UofL Hite Art Institute’s Open Studio Tour later this year (and you should be), you can find May at Art Sanctuary as their artist-in-residence.

LEO: I’m able to spot your art across a room. The figure is certainly your specialty. What draws you to the human form?

James Russell May: To me the human form seems to be the universal subject. The brain is hardwired to recognize the face and body and will often see one even when it is not there. There is a fundamental reaction to seeing the body represented that appeals to me as an artist.

From the first time I started to draw as a child, I was drawing the human figure. In the beginning, of course, they were comic book figures, which is actually not a bad place to start. The exaggeration and necessary simplification gave me an idea of how the body was put together in a way that I could understand. That would be useful as I began to pursue art more seriously.

LEO: Representational art is in, then out, of favor. You attended the Savannah College of Art and Design, one of the best art schools in the country. Did you go in knowing you preferred to draw the human figure, or did you find out this was your calling during your studies?

JRM: Starting art school, I really didn’t know what I was going to do with my art. The figure was certainly one of my specialties, but I tried as many different subjects and techniques as I could. It wasn’t until my final year as a student that I decided to become a painter and the figure slowly became the natural focus. My true appreciation developed as I dedicated myself to painting after graduation and was no longer doing assignments but producing only what I was inspired to create. Over my career, I have changed my style and explored other subjects, including abstract painting, but the figure never goes away for long.

LEO: Greek and Roman mythology seems an obvious source of inspiration. What are your other influences?

JRM: When I began as a painter, my work was greatly inspired by the German Expressionists and mid-century abstract painters like Mark Rothko. As I gained experience, I started to become fascinated with more traditional techniques in painting. When I see historical art in the European tradition, usually called “Classical Art,” I am struck by a competing sense of the familiar and the alien. The culture that produced these works is still all around us but has moved on and evolved into something very different. My use of mythological subject matter has a great deal to do with its great bearing in the history of painting. Much of my recent work has been influenced by study of these works of art and my response to them as someone who grew up in a postmodern world.

JRM: I’ve used animal forms in my work before, usually interacting with humans, but recently I have been making them the focus of their own works. It’s been an interesting challenge to give the animal subjects the same style as my paintings with humans, and [I] believe I’m getting the hang of it. I will be continuing to paint humans as well, who are, after all, just another type of animal.

LEO: What is something people do not know about you?

JRM: Well, I should probably be embarrassed, but I’ve only had one class in painting. Although I attended art school, I came to painting late and struggled with it quite a bit. I took a lot of different courses on various aspects of art but only one on actual painting. I became close friends with some serious painters and was soon inspired to begin painting for myself. I wasn’t able to include more painting classes in my curriculum before graduation, but I was determined to paint. I learned what I could from other artists but had to teach myself most of my techniques from just doing it. Over the years, the lack of formal training has been both a blessing and a curse but it has led me to develop what I feel is a unique style.