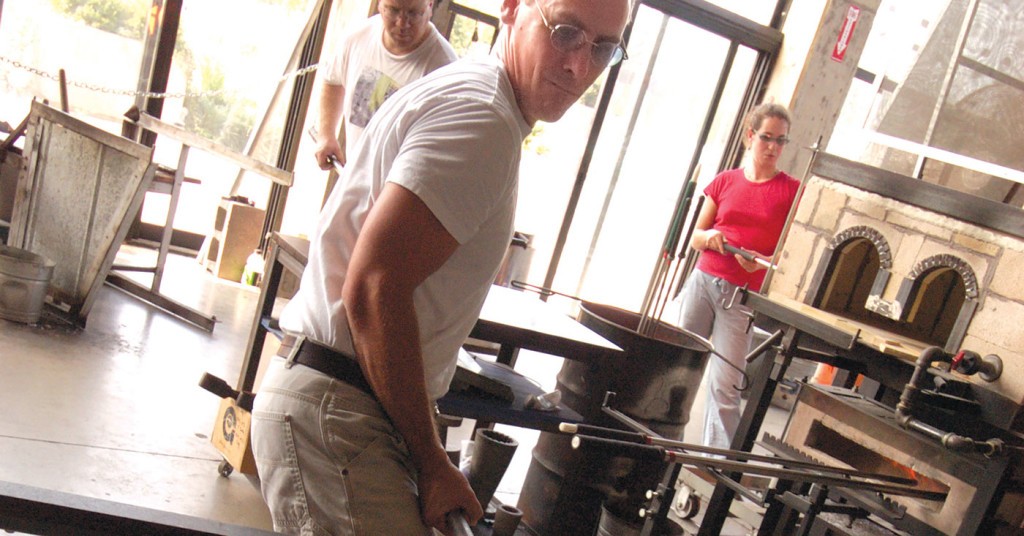 Historians know how glassblowing was created and when it arrived in America. We even know how it got to Kentucky. But Louisville? That’s the question Flame Run business and gallery manager Tiffany Ackerman pondered that led her on the journey that became the exhibition “502.”

A little background: Glass is largely made of sand and heat. There’s natural glass, such as fulgurites (created when lightening strikes a beach). The Phoenicians are credited with the accidental discovery of human-made glass. The ancient Romans invented glassblowing, the art of placing a molten blob of glass on the end of a tube and blowing air to expand it. Glassblowing requires a furnace to keep the glass malleable; it’s strangely personal and hands-on for something so hot. For centuries, the most important location for European glass was Murano, outside Venice, Italy.

When glassmaking traveled to America with the colonists, it was industrial, not artistic, largely used for bottles and windows. Although not a glassblower, Louis C. Tiffany is America’s best-known glass artist for his production of stained glass windows.

During the late 1950s, Harvey Littleton started experimenting with glass heated in small homemade furnaces in art studios at the University of Wisconsin, Madison. Thus the American studio glass movement was born.

Kentucky’s glassblowing renaissance came with the arrival of Stephen Rolfe Powell at Centre College in Danville in the mid-1980s. Many of Louisville’s current glass artists studied with Powell or one of his students.

Ackerman’s research, with assistance by glass artist and historian Jonathan Stokes, discovered there were glassblowers in Louisville before Powell’s arrived at Centre. “’502’ [pays] homage to artists who blew glass with ‘tin-can technology,’ artists who figured out how to build furnaces long before you could order one online,” she says.

It seems Howard Wilson is our area’s pioneer. Largely self-taught, he opened his first glassblowing studio in Manchester, Kentucky, in 1976. By 1980, he had moved to Louisville, where he reopened at 834 Franklin St. “It was a garage studio that was so cute and tiny you had to move the cars to blow glass,” states Ackerman. His last studio at 1012 Cherokee Road closed in 1997.

Another early Louisville glassblower was Bernadette (Berni) North, who opened The Dreamery Gallery/Berni Enterprises on Baxter Ave. in 1983. She later moved to Brooks, Kentucky, outside Shepherdsville, and opened the Hawk’s View studio and gallery in 1996 (it closed in 2014).

The University of Louisville now has its own glassblowing program headed by former Powell student Che Rhodes.

This exhibition begs to be expanded and made into a book. Louisville has so many glass artists now that it would be close to impossible to be all-inclusive, but there are some notable gaps, such as Fred di Frenzi and Casey Hyland (Ackerman told me not all people contacted wished to be included or even returned her calls).