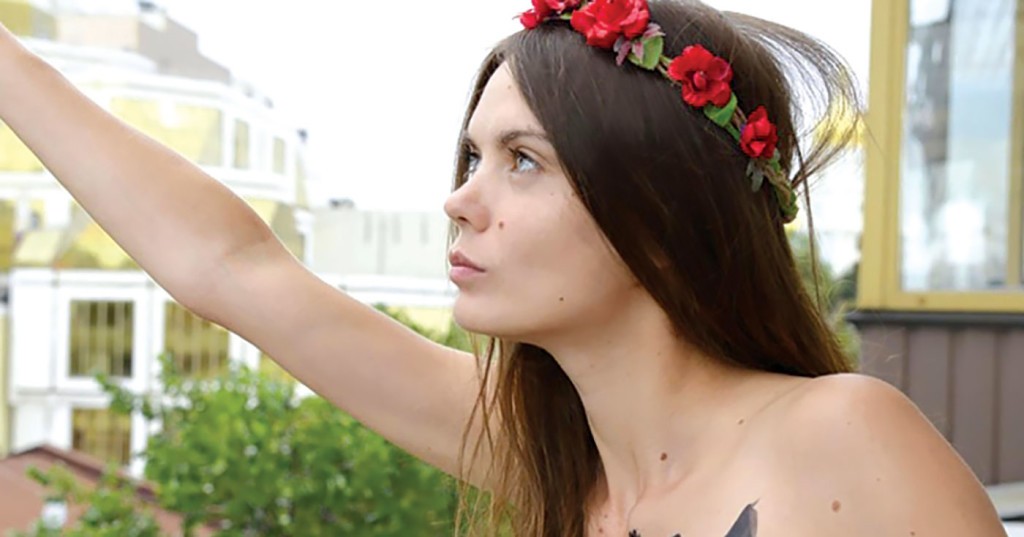 I AM FEMEN
2014; $24.98; UR
There are thousands of reviews of this doc on the Net, all saddled with the same tired joke: some variation of “a revealing look.” We shall strive to avoid such childishness. FEMEN is the international movement of topless female activists fighting our planet’s male-dominated political and social institutions and their legacy of oppression, forced marriage, sex slavery and female illiteracy. Lead by Ukrainian artist and model Oksana Shachko, who literally uses her body to draw attention to her cause, the movement has spread like wildfire across Europe and the former Soviet Union. Whew! Made it — no breast puns! We thought we were gonna bust.

I, MADMAN
1989; $17.96; R
This mad-slasher film from the final days of the dead-teenager craze, stars Jenny Wright, known for being, as they say, “a handful”: intelligent, opinionated, and outspoken. We’ve been big fans ever since 1987’s “Near Dark”; filmmaker Kathryn Bigelow’s wonderfully bloody vampire-family Romeo-and-Juliet tale (highly recommended). Here she’s a mousy drone in a used-bookstore who discovers a tome about a doctor cutting off peoples body parts … then wearing them. But it’s all real! And she’s to be his next victim! A hidden gem, now on Blu-Ray, that truly delivers; directed by the oft-maligned Tibor Takacs.

COMMITTED
1984; $24.95; UR
A welcome re-issue of this stylized account of the “true” story of Hollywood starlet Frances Farmer, the beautiful ingenue whose brazen political outspokenness may have been rooted in a psychological disorder (theories vary). In any event, some claim she was lobotomized, and her helpless body sold nightly in sex-slavery by the hospital staff. Unlike the more famous Jessica Lange biopic, this focuses on the many familial, political and cultural issues facing women of America during the 40’s-60’s, presenting them in a personal, dreamy b&w production.

GUARDIAN NINJA MAMORU
2006; $49.98; UR
Teenage Kagemori never takes his eyes off his lovely childhood friend, Yuna. But this is more than simple puppy-love, he is in fact a boy-Ninja, the latest in a line of secret warriors going back 400 years, sworn to protect her family. And, boy!, does this clumsy, clueless, wide-eyed beauty need protecting! Then, just as he is getting the hang of the job, the school starts filling up with new girls. Sweet, smart, pretty girls. Who all carry mystical, hidden weapons, are supernaturally athletic and seem very interested in him. Hmmm. Somethin’s goin’ on here. A sweet, fun, harmless and surprisingly addictive anime series.

KUNG FU KILLER
2014; $14.95-29.98; UR
The great Donnie Yen, who seems to be in every other flick these days (not a complaint), plays a convict who offers his service to the police hunting a madman who kills professional martial arts competitors. They let him out (yeah, right) — making him the killer’s next victim! He has no choice but to escape his police handlers, leading to a bloody three-sided cat-and-mouse game that ultimately threatens Yen’s girlfriend, lovely Bing Bai. A rock-solid Kung Fu drama made by the best team in the business.

ROBOT CHICKEN: SEASON SEVEN
2014; $24.98
Seth Green and his cracked pals continue to amaze, getting stronger with each passing year. Don’t believe us? Check out “El Skeletorito”, season seven’s delirious spoof on “Tales from the Crypt” and its rotting, avuncular host, The Cryptkeeper. Reimagined here with a weird South Of The Border twist, he provides the corny wraparounds for three quick vignettes: a welcome visit by the Iron Sheik, a sick version of Candy Crush and our fave: an icky phone call to Woody Woodpecker!

TANGERINES
2013; $27.98; UR
This Oscar-nominated Russian flick is a simple, very personal treatise on the nature of Man. During the 1990’s Soviet war in Georgia, an elderly Estonian becomes responsible for a pair of wounded soldiers, one from each side of the conflict. He is there to harvest what will probably be his final crop of tangerines, requiring the two to accompany him into the fields. There, despite the beautiful Eden-like setting, seemingly immune to the battles raging just outside, the two set about trying to kill each other. Largely powerless to stop them, he leads with compassion: Mankind’s only claim to “humanity.” Extraordinary.

WHAT WE DO IN THE SHADOWS
2015; $24.99; R
While this low-rent horro-comic mockumentary won’t win any Oscars, we’ve already named it one of the best movies of 2015. The guys behind “Flight of the Conchords” present a wonderfully warped, very personal look at flatmates tackling all the day-to-day foibles of modern life, while also being undead vampires. Jemaine Clement, Taika Waititi and friends must learn to co-exist; crowding together to brush their teeth and comb their hair in one tiny bathroom, for example — without a mirror! And who’s turn was it to mop up after “dinner?” The “taking a selfie” bit made us pee; don’t miss it.