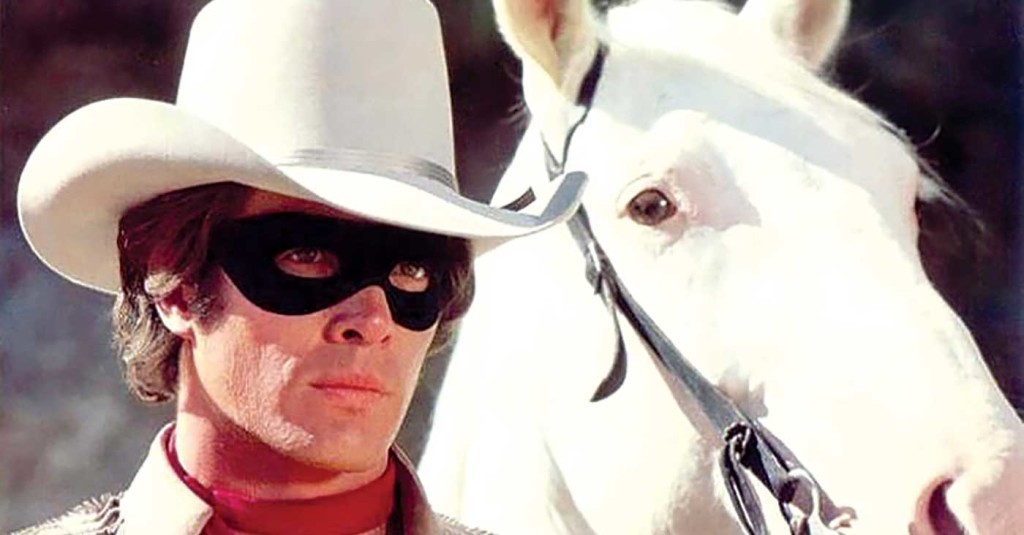 The Legend of the Lone Ranger

THE HOWLING II: YOUR SISTER IS A WEREWOLF
1985; $17.89-24.97; R
Joe “Gremlins” Dante created the original “Howling,” a legendary sexy-shocker featuring some of the greatest werewolf transformations ever imagined, with help from Rick Baker and Rob Bottin. It famously culminated in Dee Wallace’s snarling lycanthro-morph on live national TV; a touchstone for the 80s generation. This sequel is more shlock than shock with the late horro-vet Christopher Lee leading a mangy mishmash of punks, freaks and wannabes from bad-movie hell — including Patrick Macnee, Kevin McCarthy, John Carradine, Kenneth Tobey, Dick Miller and Robert Picardo — famously culminating in Sybil Danning’s famous, repeated end-credit ninnie-launchings, all now on Blu-Ray.

THE LEGEND OF THE LONE RANGER
1981; $17.87-19.87; PG
Klinton Spilsbury. In the canon of great actors who dared breath life into the immortal heroes of The Old West, Klinton Spilsbury as the Lone Ranger will not be among them. In only his third appearance before a camera, he demanded daily script rewrites because he couldn’t remember his lines, then required the director to shoot the film in sequential-scene order so that he could “feel his character’s arc.” Even with Christopher Lloyd as the bad guy, this remains one of the worst movies ever made – if arguably better than that Johnny Depp “Ranger” – but that doesn’t mean it’s not entertaining. One of our favorite Oater-stinkers, now on Blu-Ray.

CELLAR DWELLAR/CATACOMBS
$17.95; R
Oh, wow! A craptacular pair of Empire Pictures, er, “best” from 1988. As the doomed studio was swirling the drain, legendary shlock-meister Charles Band (who at last count has produced over 265 truly Bad-With-A-Capital-“B”-movies) strove forward, creating these funny/screwy grinders peppered with the likes of Jeffrey Combs, Timothy Van Patten and Yvonne De Carlo(!), to name a few. Don’t worry about any supposed plot, pacing, continuity or common sense, these are simply colorful gonzo crapfests meant to fill seats, evoke “ewww!”s and drive popcorn consumption. Life doesn’t get any better than this, now on Blu-Ray.

CLOUDS OF SILS MARIA
2014; $29.98; R
Veteran star Juliette Binoche leads this light distaff drama as a respected actress preparing to portray the older woman in a May-December lesbian romantic drama opposite dewy Chloe Grace Moretz. Frankly, she’s a complete mess: insecure and angry about growing older in a youth-obsessed profession, and just barely able to hold things together as her head fills with steamy thoughts about her free-spirited assistant — Kristen Stewart! Well, we can certainly understand that last part. Surprisingly upbeat and touching, with innocent nudity.

IT FOLLOWS
2014; $26.98-29.98; R
Blonde cutie Maika Monroe (“The Bling Ring”) has happy, innocent car-sex before going completely paranoid, convinced that someone or something is following her. She gathers together all her smokin’-hot friends and they make a classic teen-horror-film pact: to get outta town and protect her from the threat. If you think this is gonna go well, then you’ve apparently never seen an R-rated teen movie before. But don’t let our flippance deter you from checking this out, it’s one of the scariest damned movies of recent times. Really delivers.

PAUL BLART: MALL COP 2
2015; $19.98; PG
While you’d be hard-pressed to find anyone who admits to seeing — much less liking — the original, it nonetheless was 2009’s first film to gross over $100 million. And with all the moolah, it was a no-brainer for the studio to offer Blart (Kevin James) a Vegas vacation, letting daughter Raini “Austin & Ally” Rodriguez come along for one last pre-college daddy-day. The largely Hispanic cast, lead by Daniella “Friday Night Lights” Alonso and Eduardo Verástegui (2004’s “Charmed”), easily steals the show from James, which is probably a good thing.

THE SALT OF THE EARTH
2015; 27.99; PG-13
Master director/photographer Wim “Wings of Desire” Wenders pays homage to inspirational photographer Sebastião Salgado, who has spent the last four decades traveling the world, documenting humanity in all its glories, warts and insanity. Now his camera turns to the natural world, showing what happens when Nature finds a pool of calm amid the ever-expanding corruption of Man. Salgado’s son and Wenders both narrate this look at the world’s foremost — if least known — artist/visionary, and the extreme beauty of his world, bereft of our wretched mercies. Left us unable to watch the evening news for weeks.

THE SECOND BEST EXOTIC MARIGOLD HOTEL
2015; $29.98-39.98; PG
Why would you spend money on something that’s admittedly second-best?

WKRP IN CINCINNATI: SEASON THREE
1981; $24.97; UR
While “WKRP” lasted only four seasons, it remains one of our all-time favorites, making stars of Howard “Doctor Johnny Fever” Hessman, Tim “Venus Flytrap” Reid, and of course Loni “Oh, My Freakin’ God!” Anderson. The highlight this season is a spoof on “A Christmas Carol”, sparked when boss-man Mr.Carlson (Gordon Jump) eats one of Fever’s “special” brownies (wink wink), arguably the earliest reference to mainstream cannabis consumption in a prime time sitcom. It is truly embarrassing how much we love this damned show.

ALL QUIET ON THE WESTERN FRONT
1979; $22.97; UR
We’re not big war-flick fans, but this late-70’s entry is remarkable if only because it was Richard Thomas’ first major effort after “The Waltons” had made him a star – and has a cast that includes Ernest Borgnine (the most underrated actor we know), Donald Pleasence, Ian “Old Bilbo” Holm, and Patricia Neal. German John-Boy and his pals graduate highschool and immediately enlist in the Imperial Army during WWI, expecting to return heroes. They are all killed one by one until only Thomas is left. This quality of this production is all the more remarkable when you consider that it was made for TV! Now available in an uncut Blu-Ray edition.

DAWN PATROL
2014; $13.98; UR
Scott Eastwood is front-and-center in every scene of this heavy drama about a surf-bum whose brother (Chris Brochu) is killed. He sets out for revenge – and finds it – only to discover he has killed (dum dum DUMMM) the wrong man! (Not a spoiler, it’s on the box cover.) So he does what every dangerous, regret-filled human monster does: he joins the Marines. But distant desert lands may bring more retribution than he can handle in this hellbound eye-for-an-eye drama enlightened by Jeff Fahey, Rita “The Good Wife” Wilson and soap ingenue Kim Matula.

HIDDEN AWAY
2014; $24.99; UR
A surprise international hit from Spain, this raised a few ‘Merican eyebrows, centering as it does on the burgeoning sexual curiousity of two 14-year old boys. (And as former 14-year old boys, we can attest that the word “burgeoning” doesn’t begin to cover it). Spanish Rafa meets Moroccon Ibrahim – in danger of being deported – in a hostel where they become close friends and spend a frantic, idyllic summer talking, exploring, running from adulthood, and coming to grips with their sexuality. A brilliant script, with no sex or nudity to distract, and a gifted soundtrack that you won’t get out of your head for weeks.

KILL ME THREE TIMES
2014; $26.98-29.98; R
Simon “Shaun Of The Dead” Pegg stars in this odd dark-comic Australian-made actioner that’s both a straight-up crime thriller and something of an anthology populated by surprising guest stars. Pegg plays an unlikeable hitman who screws up a job, spawning three intertwining tales of fallout featuring Teresa “Warm Bodies” Palmer (who was pregnant during the shoot), little Alice “Elysium” Braga, and Luke “Chris and Liam’s Bro” Hemsworth. Gory in spots, and won’t appear on anyone’s Best Of list – you’ll be rolling your eyes at times – but watchable if only for the great cast.

THE OUTING/THE GODSEND
$17.94; RYet another Blu-Ray double feature which, despite not having the pedigree of some others this week, succeeds in being entertaining as only craptacular 80’s horrors can. The first, from 1987, stars no one in particular in a tale about an evil genie in a magic lamp which, after being stolen from an old woman’s home, wreaks bloody vengeance inside a museum at night. The other, something of an “Omen” ripoff from 1980 England, presents a mysterious pregnant woman arriving unannounced, giving birth, then vanishing, leaving her surprised host family with a bloody little bundle of joy, filled with demonic hatred for her sibs. Both suck, but in a good way.