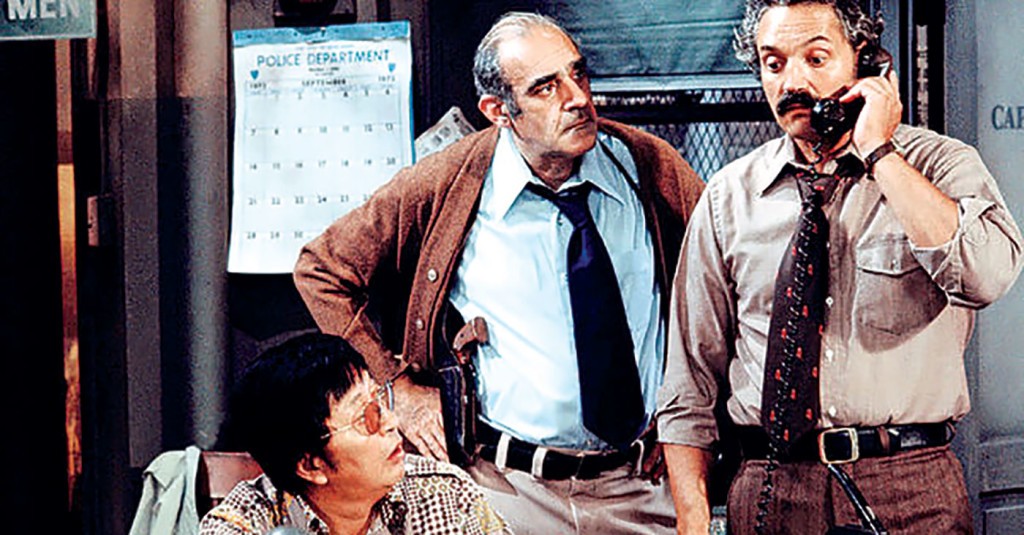 BARNEY MILLER: THE FINAL SEASON
1981; $17.98-24.98; UR
With much of the cast aging and the rest having become stars, this brilliant sit-com/drama set in a rundown Greenwich Village police station bowed out in style, allowing each cast member their own signature episode before ending in a groundbreaking three -part finale unlike anything seen on the tube before or since. Mid-season, Harris and Dietrich (Ron Glass and Steve Landesberg) nearly kill each other on stakeout in a tiny, dinghy hotel room, one of only a handful of episodes not confined to the police station set. Brilliant writing, terrific characters portrayed by some of America’s greatest actors, led by Hal Linden, this may be TV’s finest hour. Just. Buy. It.

WOMAN IN GOLD
2015; $24.98; PG-13
Helen Mirren. Do we really need to say more? (Editor: Ye$.) Okay, okay. Force-of-Nature Helen is in her element in this true story of Maria Altmann, child of a wealthy Jewish family all but obliterated by the Nazis, who stole all their lands and possessions. Now an old woman, she hires lawyer Ryan Reynolds (who holds his own beautifully, lifted by Mirren’s tidal force) to sue the Austrian government for the return of the family heirlooms, leading to a landmark confrontation before the US Supreme Court. Insanely entertaining. (Spoiler alert: Upon return of the priceless titular painting of her beloved aunt she … sells it!)

DARK SUMMER
2015; $14.98-24.98; UR
Right up front: This low- rent ghost -thriller is a complete mess, but how can you argue with stars like Keir “United States of Tara” Gilchrist, gorgeous Grace “The Vampire Diaries” Phipps, cute Stella “The Runaways” Maeve, and especially the great Peter “‘Satan’ from ‘Constantine”’ Stormare? Gilchrist plays an overexcited teen boy under house arrest for cyberstalking Phipps — and the girl is considered the creepy one! What happens next is too good to spoil, even if the filmmakers continue to try. We’ve enjoyed far worse.

DELI MAN
2014; $14.98-34.98; PG-13
A doc on the traditions, food and unique cultural history of the Jewish deli in America, featuring a conversation with Ziggy Gruber, grandson of the founder of Manhattan’s fabled 1920s strictly Kosher Rialto Deli, and current owner of one of Houston Texas’ largest delis — a state not known for embracing non–Christian culture. Filled with enthusiastic tales by Jewish celebs — King, Stiller, Finkel, Dershowitz, et cetera — that are guaranteed to make your mouth water. Damn, we’re hungry.

FOR THE EMPEROR
2014; $17.98; UR
South Korean films are notoriously violent, gritty and exceptionally affecting character studies within an all- pervasive criminal underworld. And while this flick certainly follows that path, the antihero is a formerly revered baseball star who pisses away his chance at glory by fixing games, becoming the veritable slave of an evil mob moss. His chance at redemption arrives in the form of curvy, nymphet barmaid Tae-im Lee, whom he beds in a rousing, lights–on sex scene that caused all the blood to race from our brains. Uh, what were we writing about again?

ROBOTJOX
1989; $17.89-24.97; PG
“The Reanimator” genius Stuart Gordon directed this nearly forgotten live-action American attempt at Japanese mecha, finally available on Blu-Ray. In the future, battles for territory — i.e, “wars” — are fought by combatants in armored robot-suits, televised worldwide. With the state of Alaska on the line (oh, why couldn’t it be Texas?!), Gary “Star Trek: Enterprise” Graham prepares his team for battle with some of the most cringe–inducing dialog ever recorded. Frankly, this movie is a brain–dead turkey, but remains one of the most entertaining brain-dead turkeys around. The highlights include illiteracy, Jeffery Combs, sexism, Anne -Marie “JAG” Johnson and gratuitous chainsaw -crotches. Highly recommended.

THE BROKENWOOD MYSTERIES, SERIES ONE
2014; $32.98-59.98; UR
While this New Zealand cop series is often compared to Britain’s long -running “Midsomer Murders”, that’s mostly marketing hype. The truth is far more interesting when a personality-challenged, multiply -divorced big -city police detective (comic actor Neill “Go Girls” Rea) takes up new duties in a bucolic town on NZ’s North Island. Saddled with a by -the -book assistant (Fern “The Almighty Johnsons” Sutherland) and a broken -down car, the two stumble forward in classic mismatch -partner fashion. But to us the real star is the heaven- on -Earth land in which the series plays out, featuring “Lord Of The Rings” vistas, jaw–dropping beaches, beautiful people and verdant, friendly jungles just begging to be explored. Man! Do we need a vacation!

TIGER ORANGE
2014; $17.98-24.98; UR
Promoted as a serious gay/family drama, the primary conflicts between two brothers are more universal: money, love and fatherly estrangement. The fact that one of the two (Frankie Valenti, formerly pornster “Johnny Hazzard”) is openly gay just serves as an convenient hot -button. He and closeted brother Mark “Out to Kill” Stano, who wrote and produced, must come together and find common ground after the death of their homophobe dad. A solid, mature family drama that resists histrionics in favor of an honest assessment of sibling wounds, real or imagined.

JOE DIRT
2001; $12.95; PG-13
Right up front: We’re not big fans of David Spade. But we’re obviously in the minority when it comes to this wildly popular low-brow comedy co-starring Brittany “The Game” Daniel, with lesser bits by Dennis Miller, Christopher Walken, Jaime Pressly, and Kid Rock, capped by Fred Ward and and Caroline “21 Jump Street” Aaron as the missing mom and dad who “lost” him in the Grand Canyon as a child. Produced by Adam Sandler, as if that helps, and now available on Blu-Ray. Just when you thought the nightmare was over …

THE DOVEKEEPERS
2015; $27.98-42.98; UR
To us, these made-for-TV “historical” Biblical dramas are hilarious, populated as they are exclusively by wispy, lily-white Caucasians, many of Irish descent, being kicked around by mean old Romans, none of whom ever get dirty despite sleeping in filth and having sex in a cistern. Tells a truly twisted, gynocentric version of the siege of Masada, the final Jewish stronghold high on a hilltop (not a mountain, as often portrayed) during the first Jewish-Roman war in 73 CE. Made big TV numbers, but why the Jewish community isn’t up in arms we can only guess. Oy.

THE ROAD WITHIN
2014; $14.98-29.98; R
At first glance this appeared to be a cameo-movie, with bits by Robert Patrick, Kyra Sedgwick, Ali “Regular Show” Hillis, et al., but the central arc about a young man with Tourette Syndrome (Robert “The Mortal Instruments” Sheehan), dealing with the loss of his mother, is inspired. And much of the credit has to go to beautiful Zoe “Divergent” Kravitz and quirky Dave “Chappie” Patel as his best friends, who help him steal Sedgwick’s car for a screwy funerary road trip. Truly hilarious, moving and wildly entertaining; our highest recommendation.

A More Complete Listing and Free Vids at www.VideoTapeWorm.com