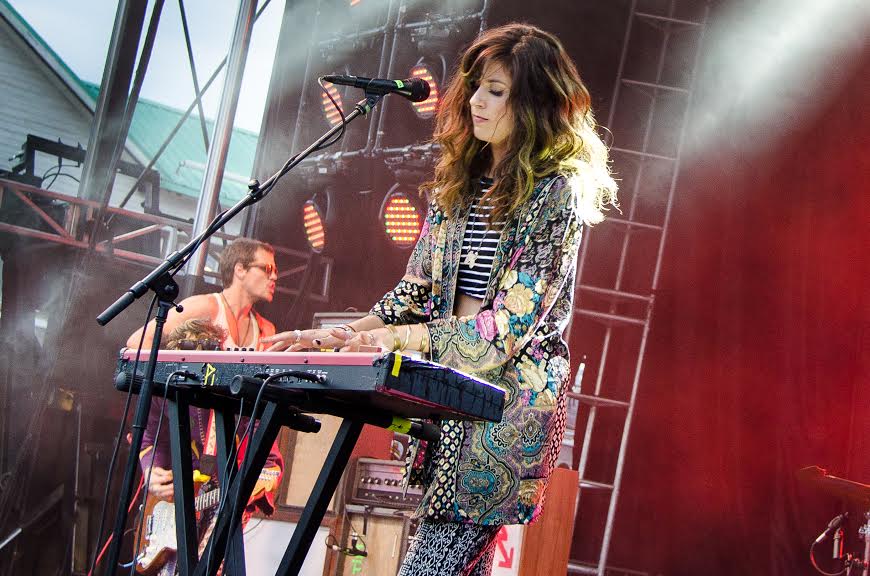 Syd: I’ve been to four Forecastles, all at different locations. The earliest was at Tyler Park back in the day, packed only with locals. From there it has only grown up and out, until it now fills up the entirety of Waterfront Park into a sprawling four stage set-up that can comfortably host a small town. There are food and drink vendors everywhere, and plenty of stuff in between. Hell, I found a place to buy shoes while I was there, which may come in handy with all the mud that’s bound to turn up after all this rain. Assuming all the stages don’t float away after Friday night’s big storm. More on that later.

After surveying the land, I walked over to catch Alvvays, who moved their set up to replace Speedy Ortiz, who unfortunately had to cancel due to illness. While waiting on Alvvays to sound check, I caught the beginning of Cage the Elephant, who opened with a pretty righteous rendition of “My Old Kentucky Home,” albeit sans the troublesome lyrics. They were fun and had a good fuzzed-out guitar vibe. Alvvays was awesome. Near their stage was a field of hammocks, which in and of itself is kind of a fantasy land.

The last of the night for me was Houndmouth. If there were less than 8,000 people watching them, I’d be shocked. They put on a helluva show, and you could tell they were into it. I left after their set, which is unfortunate in that I missed finding out what Sam Smith was all about, but lucky in that I missed the torrential downpour that caused the festival to close abruptly, apparently midway through Smith’s set. Let’s hope the stages don’t drift down river tonight, or that if they do, that we all crowd on the bell and watch people slay tomorrow.

Scott: Two guys who appeared to be in their late 20s approached us, singing R. Kelly. This sort of thing happen at festivals, people get drunk and strange and fun to watch, so when this happened at 3pm by the bourbon lounge, no one in my group was particularly surprised. What was surprising is, after about 10 seconds we realized that they were being followed by five cameras. I turned to my friend and asked what he thought this was about. He said it was probably people from a mega church, a completely nonsensical conclusion, but it seemed to make sense at the time, so I spent my 45 seconds on camera making strange faces and staring directly into one of the handhelds like one of characters from The Black Lodge in Twin Peaks. Afterward, two festival employees approached us with release forms and I asked them what is what for. They said that was two members of Cage The Elephant and that they were doing a series of oddball videos for Forecastle’s website.

My favorite set of the day was from Parker Millsap. If Parker Millsap is writing songs like this in his early 20s — poignant, harding-hitting Southern gothic Americana gems — then he is an artist to watch for the next decade plus. During his early 1:45 p.m. afternoon set on Friday, he powered through songs from his small archive, material that covers heavy subjects — drugs, prostitution, the pitfalls of religion. And maybe the most impressive aspect of the young songwriter isn’t his maturity in terms of his content, but also understanding that when you play folk music at a festival, you can’t put people to sleep. He seeded to have a solid awareness of his environment and audience. With an upright bassist and a fiddle player, he kept things fast and exciting. Cage The Elephant was a good time and unfortunately I missed JEFF The Brotherhood — who I was most excited to see, but these things happen at festivals — but other than that nothing stood out to me as particularly special.

The ugly: weather, the “Camel Tour”

Forecastle 2015 kicked off early on Friday, before office minions (not the yellow kind) expunge themselves from their cubicles, with a steady and restrained force. Milo Green drenched the main Mast Stage in a reverberated electric folk/pop to welcome festival goers. Rather than nosh down on grub or dip into the stages’ photo pits from the get-go, I wanted to explore the peripheral “festival experience” tents. You know, those branded booths offering free or specially-priced goods, or better yet, a fully-branded experience that you might tell your friends about, in essence organically propagating a brand message. Engaging with the brand. Marketing is so dope, you guys.

Some nailed it. Tito’s Vodka offered a grab bag of sunglasses, bandanas and other summer appropriate gear. Hell yeah, I want this stuff, and also I’m a walking advert for Tito’s. You could do worse. While wanting to really dig into the branded festival vendors, yours truly grabbed a golden ticket and hopped aboard the most magical tour in the land — the Camel Tour. I asked the blue-haired attendant, probably in her mid-20s, what wonders lied ahead. She told me she’d never reveal, it must be experienced. Like The Wall. OK, heave ho … I saunter through the threshold and immediately get requested to pull my licensed from my wallet to scan. “Why?” I asked, and the young man inside the house of mirrors asked with haste “do you smoke?” I said I didn’t, and was kicked out by a svelt young man with a Telxon. That’s cold, fam. For what it’s worth, in the brief time I was allowed to watch Oz work behind the curtain, there’s a photo booth and a giant camel statue you can draw on with Sharpie (trade mark). That’s the magical Camel Tour. More like smoke and mirrors. Fuck them.

I really wanted to check the HTC “virtual reality tour” tent. The volunteer told me it was one of the coolest experiences she’s had, which is a ringing endorsement, no? And really that’s what festivals are, right? A series of experiences and brand engagements. But I wasn’t going to wait an hour (though she assured me it was worth it). I’m media… I have “shit” to #do. Really, I wanted to see if it resembled the 1992 psychological horror film The Lawnmower Man. It’s like Flowers for Algernon, but with computers.

Oh, but the good! First, JEFF the Brotherhood might be the most photographic band in the world because a) their songs stretch over six minutes (photogs are limited to the first three songs per festival protocol, no matter the length, so this is great), b) they strike amazing poses, c) they rule, and d) Jake Orrall’s translucent see-through Gibson SG. It’s some Guggenheim shit. And they tore up the Boom Stage in the most nasty, primordial manner possible with their sludge prog-punk. That they didn’t score Jurassic World is a travesty.

The move of Alvvays from sweltering afternoon to ambient dusk, due to Speedy Ortiz’s last minute cancellation, proved ever so serendipitous — their expansive power-pop, reminiscent of maestros Velocity Girl and Aislers Set, glimmering over the Ohio River at sunset was the perfect ambience. Alvvays’s set was an unequivocal highlight. I loved them. They’re an amazing band that deserves all the rubies.

ZZ Ward was upsetting. Her aggressive form of, I think, trip-hop didn’t marry well with her screaming stage banter about how much “Louisville fuuuucking rooocks, motherfuuuucker!” Yawn. Big K.R.I.T. was also a massive snooze — 808 beats and chants of “fuck these haters and fuck these hoes.” Snooze. For magma-propulsive, visceral hip-hop, SoCal’s People Under the Stairs already drove that school bus home with a barn burnin’ afternoon set. And while the crowd was light, they were lit. If you missed it, you missed it.

As happens every now and again, Forecastle gets evacuated for stupid weather, and it seems a surprise derecho (I think that’s what it was) cut Friday short, disallowing fans to “stay” with Sam Smith. But also per usual, the under-appreciated staff jumped into action and made it the smoothest exit to Friday night possible.

Here’s my portrait from the super awesome Jeremy Sutton at the Heineken tent, who was also great…

Yes, you get branded officially, but that’s the festival experience. So see him, he rules.

Zach: Day one of the 2015 Forecastle Festival will probably be remembered for the monstrous storm that caused Sam Smith to shut down early, but for me it was all about two amazing sets. The first great set came from Canada’s Alvvays. Their album is a breezy collection of glimmering songs, but I was worried they wouldn’t be able to capture the magic live. With a great sense of humor and ease about themselves, Alvvays seemed to radiate a glow with the slow moving Ohio river behind the band. It was a laid-back, perfect set on the first day.

The second band that shined on day one was hometown heroes, Houndmouth. As they have moved to bigger stages and better set times over the years, Houndmouth proved this year that the growth is deserved. With floating harmonies and an infectious energy, Houndmouth had an already exhilarated crowd going crazy. The highlight of the set was when the band launched into “Gasoline.”  Drummer Shane Cody asked the crowd to hold up “their lighter or phone or whatever you have these days.”  The sea of people suddenly became aglow with lighters and phone screens.  It was a fascinating visual juxtaposition between the past and present … it just so happens the music of Houndmouth captures that as well. 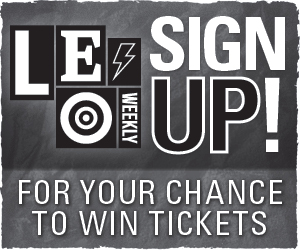