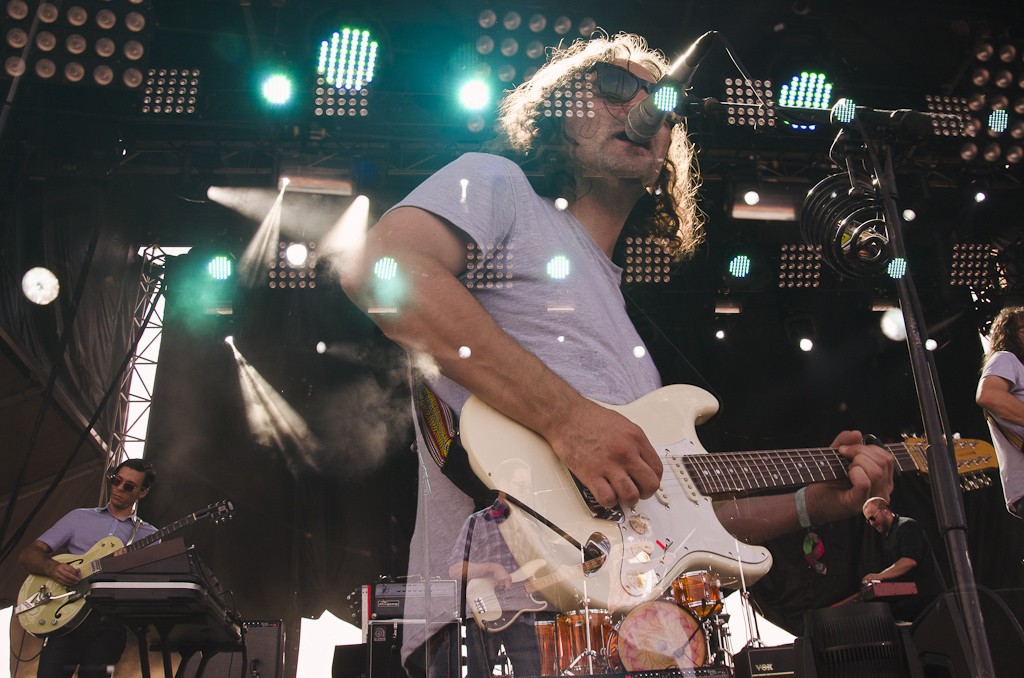 Syd: A slow heat death suffocates us all. The air is a squalid mess and respiration is more like drinking than breathing. The hippy kids there aged high school to maybe-not-high-school are drinking and smoking like it’s their day job, which, given the fact that it’s summer, it might be. All I know is that it’s hot and humid out, and by the time I arrive I feel like I need a shower. Apparently everything is running a little behind. I didn’t know this, because that would imply that I can access their website via my mobile device, or that there was any kind of announcement posted anywhere else, be that digital or physical. This is good news, as my 4:00pm arrival time now means, is that I have an opportunity to meander a bit before I catch Dr. Dundiff and Friends, now scheduled to slay at 5pm. I find the media tent and disappear two bourbons; life’s been good to me so far.

The good doctor and company are all that you want them to be. I can’t say they’re more, or that I was in love with their set entirely, as the sound was, like the ground after last night’s rain, a little muddy. That’s not good news since I posted up near the sound booth, where folks ostensibly should have a good sense for what is and isn’t working for the crowd. Too many of the rappers present — which were most of them from Louisville, at least — didn’t seem to use their microphone voices and rap into the mic. It’s a unidirectional device and you have to coax sound out of it, at least if you want to project. It was either that or the sound was just rotten. Either way, it made the whole set fall just a little flat for me, but only just a little. Highlights included up-and-comers Shadowpact, Dundiff collaborator Touch AC, and the mighty 1200; it was one for the books one way or another.

In the interim, I caught a number of other bands. Broncho and Twin Peaks both held down the chimy indie rock shreds at the WFPK tent, with Twin Peaks especially standing out. Cherub put on a delightfully danceable show that owed more than a little to Prince. I wandered over to catch The War On Drugs, and they were as reminiscent of ’80s Springsteen as I recall, which I process as neither good nor bad.

My night ended up splitting my attention between Sturgill Simpson, and My Morning Jacket. Simpson plays a traditional brand of country that definitely has no qualms with its outlaw status. MMJ made an enormous sound that filled the air all the way to Crescent Hill. It sounded to me that they played a lot off their new record, which is always nice as evidence of a band proudly forging ahead. As the headliners, they were given a wide berth, and ended up with an enormous amount of space to fill, which they did admirably. That space was filled with a beautiful noise soaked in the natural reverb of the Ohio River, perhaps perfect in every way as an attribute to their music. It was an ideal close to the evening.

Scott: The festival gates didn’t open until after 2 p.m., something that I have no sympathy toward Forecastle for. It’s a major music festival that’s been around for a while now and storms happen. Figure your shit out. Have a contingency plan, so people don’t pass out in line waiting for you to open behind schedule, which one person did. Now that that’s out of my system, I’ll move on to the good: let’s talk about Mariachi El Bronx, Twin Peaks and Sturgill Simpson.

Mariachi El Bronx was the first set of the day that I saw. A side project of the LA punk band The Bronx, Mariachi El Bronx just twists mariachi music into their west coast punk sound and it’s great, both in terms of concept and energy. This might be the best book of the festival, having them play the opening slot on Saturday.

Twin Peaks was the epitome of the kind of band that’s essential for your middle of the day pick-me-up punk, dealing in a fuzzed-out slacker punk that gave preference to distorted hooks and Mick Jagger-like howls. Easily one of the best shows of the day.

Kentucky native Sturgill Simpson’s voice carries better than any I’ve ever heard at a festival. I was by the taco truck, two football fields away from Sturgill when he started and I could hear his barroom ’70s-style country completely clearly. He’s someone you should see every time he makes a trip into town.

That feeling when you realize you might be old.

Music festivals are great at making you feel old even when you’re not, for so many reasons. Watching really young kids go apeshit for some EDM dude who sounds like Prince after getting hit by a TARC bus you’ve never heard of is one of them (his name may or may not rhyme with Terub). The other is the physiological effects. The heat, the long periods of standing and lack of sleep because you also went to the late night shows… it all hurts, man! Festivals are hard. Why do I do this to my body, which is my temple? Why do we? I’ll explore that at another time.

The woman out there is feelin’ me though, as she fainted from heat while waiting outside festival grounds when the gates were held for 45 minutes. Because of last night’s Biblical smiting of Sam Smith via freak storm, the crew had extra work yesterday morning and pushed My Morning Jacket’s soundcheck back, and in a packed festival day, that set the domino effect in place. As a principle, I don’t cover Jacket shows because, speaking of apeshit, Louisville loses their minds so vigorously and unequivocally when it comes to that band that I feel it’s everyone else’s place. I’m good here. It was nice hearing “Gideon” though, I like that song. Some of my photog friends were admonished for snapping some shots of the early afternoon check. Bummer, but I get it. Image control, fam.

Lower Dens kicked off the day, thankfully at the Ocean Stage under the bridge. They’re not an act appropriate for a sweltering afternoon that felt, to quote my main dude Rob Thomas, “seven inches from the midday sun.” The moody and nocturnal disposition of Nootropics and even moreso on their latest, highly cinematic Escape From Evil deserves a bit more ambience, but Jana Hunter and company took care of business. They stuck pretty close to their synth-heavy latest effort, exposing a whole new audience to Hunter’s resonate, incandescent vocals. “Company,’ toward the end of the set, provided Forecastle with probably the festival’s lone true blue blast of krautrock.

Later at the same stage, Dr. Dundiff was the local hero. Continuing the tradition started by The Pass in 2013 and continued with Jalin Roze last year, Dundiff did it right – get all your dang friends in a supergroup and throw the smorgasbord on stage. And so he did, rounding out his left-field full sound brand of hip-hop with members of 1200, Touch AC, the aforementioned The Pass, and oh hey, Jim James too because why not?

My personal favorite moment was The War on Drugs. I swear to the Baby Jesus that this is not meant to sound braggy or like a discarded line from LCD Soundsystem’s “Losing My Edge,” but last time I caught them, supporting Slave Ambient in early 2012, was in a 200-capacity all ages, no beer room in Bloomington with Sharon Van Etten (who also played last year). Now Adam Granduciel is fielding myriad Chaco-branded beach balls in front of thousands at the Mast Stage. Though a lot of the subtle, shoegazing-informed textures that answer the question “what if Bruce Springsteen blazed really good ganj” got lost in the festival atmosphere, the songs of Lost in the Dream were a gorgeous accompaniment to the fading sun on the choppy Ohio River. They had me feelin’ some kind of way last night.

I’d also be remiss to not mention that ILoveMakonnen is really awesomely stupid. I loved that set, and I’m confident in believing that guy is self-aware. It was so incredibly dumb but really fun. Also, King Tuff, another self-aware artist, greased up Headliners during the Forecastle Late Night Show in all the right ways. Catch him this evening!

Zach: While the blistering heat tried to win Day Two of Forecastle 2015, a few bands somehow overcame the exhausting conditions to put on a great show.

Lower Dens from Baltimore had a beautifully restrained set and at times my dehydration was mixing with the bands dreamy guitars…putting my mind in a desert oasis mirage state at the Ocean Stage.

The best surprise set of the day also happened at the Ocean Stage as Dr. Dundiff and Friends displayed the wide range and talent of the Louisville hip-hop scene.  Dundiff’s friends included Jalin Roze, 1200, BirdZoo, Jack Harlow, and too many more to name.  Backed by a full band and with a surprise appearance by Jim James…Dr. Dundiff showed that one of the best sets of a major festival doesn’t have to be a huge name.

My night started to hit its high point with two much needed wind down, chill out sets.  The War On Drugs and Sturgill Simpson couldn’t be more different in the way they sound, but both acts had this calm beauty to them and showed off why Forecastle is so special.  The festival offers a diverse array of genres which challenges the festival crowd to go outside their comfort zones and enjoy all walks of music.