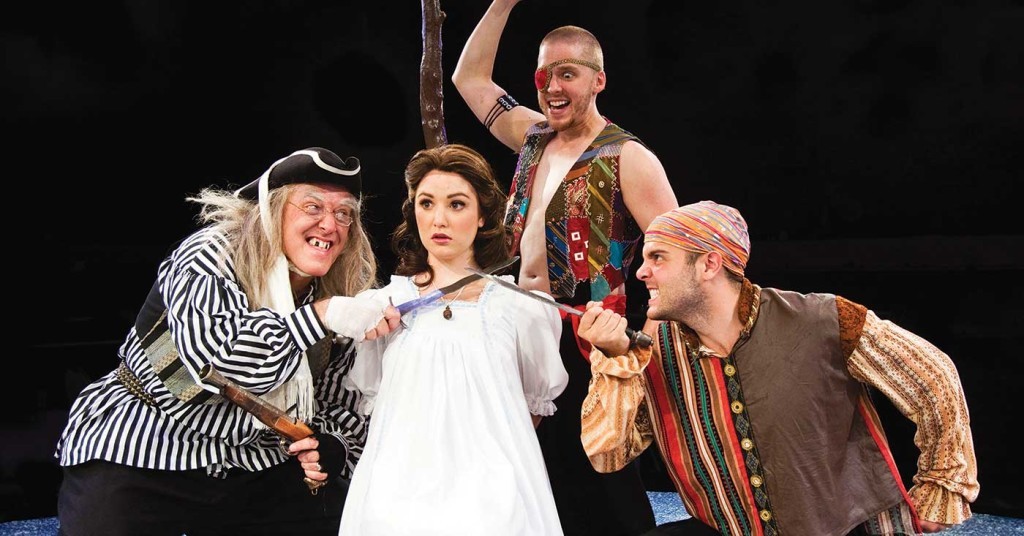 Tangos and tarantellas and Tinker Bell. Pirates and crocodiles. Lost boys and a tribe of dancing fantasial “Indians.” And a place called Neverland.

For baby boomers, “Peter Pan,” the 1954 musical based on J.M. Barrie’s original wild child, the boy who refuses to grow up, was pretty much a universal experience. On the rare occasions when the filmed version starring Mary Martin aired on NBC, families gathered  in front of the TV in a way that’s nearly unimaginable now. And with good reason. The play, with lyrics by Carolyn Leigh (plus Betty Comden and Adolph Green), music by Morris (Moose) Charlap, and Jule Styne, and original choreography by the brilliant Jerome Robbins, is a sweetly exuberant fantasy, with wit aplenty, a fine moral core, a great mix of tunes and enough action to please everybody.

It’s also a play that highlights the theatrical and musical strengths of Derby Dinner Playhouse. The production that opened last week, directed by Lee Buckholz, is genuinely delightful, and in addition to what was happening on stage, part of the delight for me was hearing the awestruck voices of young children seeing the spectacle for the first time.

The action begins in a solid, safety conscious Victorian home, as Mr. and Mrs. Darling (Jim Hesselman and Sara Gettelfinger) are readying themselves for a night out, leaving their children, Wendy (Madeline Perrone), John (Emerson Walker) and Michael (Braedan Criss) in the care of their galumphing dog Nana (played with laugh-out-loud canine tomfoolery by Dick Baker in a delightful costume by designer Sharon Murray Hannah, who, along with wig designer Heather Page Folsom, has given this cast a delightful look).

We know from her alarmed barks that Nana knows that something is afoot — and a mysterious figure has been sighted near the house. But the strains of “Tender Shepherd,” exquisitely sung by the Mrs. Darling and the three children in a fine little ensemble piece, establish a sense of serene safety.

No sooner have the grownups departed the house, and the youngsters settled into their beds, than a green light (accompanied by the sound of bells) starts a flickering, furtive investigation of the bedroom. And in short order a muscular young boy clad in colors and textures of the forest, slips in through a window. These characters, of course, are Tinker Bell and Peter Pan (John Hacker), and they’re looking for Peter’s shadow, which has somehow detached itself from its owner.

Wendy awakes and is immediately smitten with this new, confident boy (“I Gotta Crow”). It’s an attraction that arouses the jealous ire of Tinker Bell, who expresses her displeasure about this odd romantic triangle in witty musical insults. As Wendy repairs Peter’s shadow, she learns his alarming, chaotic, back story: He’s one of the “Lost Boys,” youngsters who have fallen from their carriages, lost their mothers and now live on an island called Neverland, where life would be perfect if only the boys had a mother — an assignment Wendy readily accepts.

And so the action begins. All this action inevitably awakens the Darling boys. Peter teaches all the youngsters that by imagining only good things, they, like him, can learn to fly — and within moments Peter, Wendy, John and Michael are soaring and singing above the stage (Flying Effects are by ZFX, Inc.).

Then the action moves to the exotic island of Neverland (scenery is designed by Lee Buckholz, lighting by Aaron Hutto, sound by David Nelson and puppet mastery by Jim Stock). There, in short order, we meet Captain Hook (the part is usually played by Sara Gettelfinger, but on the night I attended understudy Paul Kerr gave a rollicking, clever performance), his gloriously gap-toothed, slithering toady Smee (Jim Hesselman) and their comically rough crew (including Dick Baker, Wesley Edwards and Cary Wiger). We also meet Hook’s nemesis: a crocodile who once swallowed a clock and whose ticking belly always heralds his arrival on scene (played by Anthony Marone).

No sooner have they finished laying out a dastardly scheme — to a tango beat — then Tiger Lily (Brittany Carricato Cox) and her Indian lasses are introduced in a colorful dance (choreographed by Heather Paige Folsom) and some stereotyped dialect typical of 1950s westerns.

And when the Lost Boys show up, the stage is set for a three-pronged battle of wits and combat that plays out in a series of grand production numbers, sweet ballads and, of course, a heroic gesture from Tinker Bell, whose love for Peter is such that she’s ready to sacrifice herself for him (unless we in the audience can save her by showing that we do believe in fairies).

“Peter Pan” is the opening production in Derby Dinner Playhouse’s 2015-2016 season, and it’s worth noting that the company offers an enormous and varied slate of productions for adults and for children. Over the years, producer Bekki Jo Schneider and her team have developed an outstanding cohort of actors, singers, dancers and technical folks who have an especially strong command of golden age musicals like this. The singing in this production is superb, and it’s bolstered by excellent musical support from a five piece pit band led by musical director Scott Bradley. If you’re looking for a fun, easy-going theatrical escape with a lively, uplifting innocence — and especially if you want to introduce some youngsters to the delights of live musical theater — you can hardly do better than to attend this production.