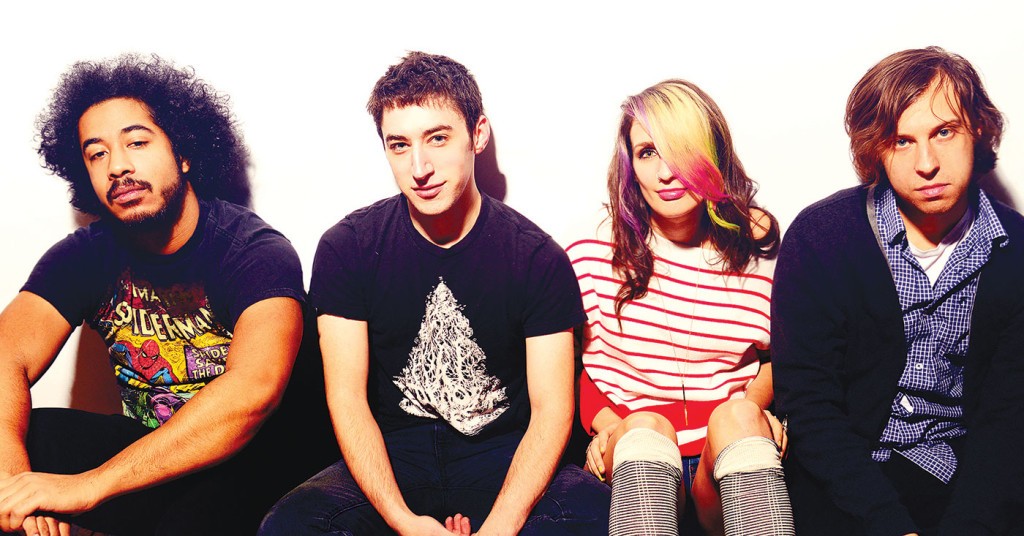 What began as a solo project for singer/guitarist Sadie Dupuis grew into a full-sized quartet. Their sound is equally informed by the thick sludgy riffage of grunge and the power of a pop hook. Their newest record, “Foil Deer,” one of year’s finest LPs, was released in the late spring.

Dupuis is certainly an ambitious musician. Despite acknowledging that she composes independent of outside collaboration, Dupuis still invites in new ideas.

“Our recordings are reflective of four distinct players and even though the songs we’re bringing to fruition started off solely as mine, I think they evolve into something for which we all claim authorship,” she says. “It’s exciting to hear how the ways I imagined the songs sounding come out; sometimes it’s just like I hoped it’d be, and sometimes it’s something totally different and even better.”

The band has played all over the country, starting out in smaller DIY venues and house shows, evolving along the way into the nationally-touring act that they are today. The punk approach to shows has found them in our neck of the woods on more than one occasion too and Dupuis seems happier for it.

“We like Louisville a lot too,” she says. “We’ve played at Dreamland with Chris Brokaw. Then at Zanzabar on tour with Ex Hex. We saw Nick Cave and Warpaint at the Palace on a day off in Louisville after we played Bonnaroo. And we always stay with the peeps in Xerxes, who are super great and watch YouTube videos and eat bagels with us. Louisville is great!”

What makes for a good show is definitely subjective. For some people, concerts are an opportunity to be social in a public setting. Dupuis admits though, “I’m a homebody and my favorite way to listen to music is on a record player. So when I go to a show, I just want to hear an interesting musical performance that gives me some insight into how the songs were played and recorded. I don’t think there’s any one right way to enjoy a show.”

Likewise, public performance is a two-way exchange between audience and performer. What does the performer owe to the crowd and vice versa?

“Kindness, mostly,” Dupuis believes. “Respect should go all around a venue — from concertgoer to concertgoer, from performer to audience, and vice versa. It drives me crazy when performers insult or discredit their audiences, under the guise of being funny. It isn’t funny at all. At the same time, concertgoers should be looking out for one another, ensuring that the venue is as safe and accessible as possible, and that everyone has a chance to see and hear the performance.”

A self-identifying feminist, Dupuis isn’t shy about sharing her views, nor should she be. For Dupuis that feminism manifests itself in her music in a few ways.

“In music, just like in many other fields, the professional gatekeepers — predominantly white, cismale, hetero gatekeepers — have spent decades promoting the work of others like themselves, to the exclusion of a diversity of artists. I think to exist within these realms that have denied entrance to women, to queer people, to people of color — I think that just to exist as a woman in these male-oriented spaces is in itself a political act.”

She continues, “It’s crazy to me that we live in a world where people can still hate feminism, a concept premised upon equality of personhood. It’s crazy that we live in a world in which expressing anti-discriminatory, anti-racist viewpoints can make you subject to a litany of trolls on social media. How is it possible that we live in a world in which it’s still radical to be a woman working in music? Just by existing as a person outside of the hegemonic class of rock dudes, I feel that social activism and awareness of the disenfranchised is integral to my experience with performing music. And I feel the need to be outspoken about injustice or inequality, especially for the sake of the younger women we meet at shows, who tell me they’d been afraid to start a band because they hadn’t seen enough representation of others like them on a stage, or felt they weren’t good enough in comparison to the male guitarists that have been highlighted their entire lives.”