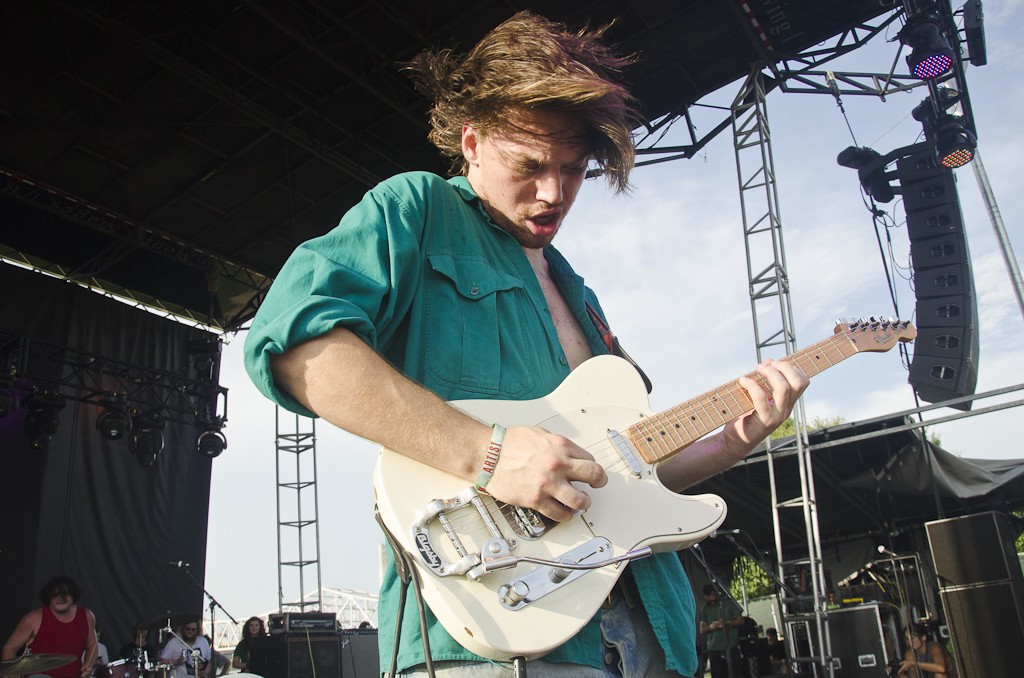 Parker Millsap
Every day the first set I caught stood out as one of my favorites. And on day one, Parker Millsap, an early-’20s-something that carves out wise-beyond-years Southern gothic folk, impressed me. I’ve known of him for a while and have always been pretty fond of his stuff, but live, he was even better, focusing on his more upbeat songs and using his fiddle player and upright bassist to keep the energy up. Some young musicians have trouble translating their solo roots music to the stage. Not him. On top of that, he has a voice that carries like Sturgill Simpson’s.—Scott Recker

Alvvays
Coming into the festival to a cacophony of dance music and blues-driven guitar rock, it was a breath of fresh air to hear Alvvays, if only figuratively given the brutally-humid Kentucky summer atmosphere. They had an airy kind of dream-pop feel that engendered a relaxing vibe of the sort that would have lent itself to sitting in a lawn chair, preferably with a fan on you, quietly nodding your head to the beat; maybe this is all just wishful thinking brought on by what I believe now to be a mild heat stroke. You could practically feel the cool Canadian air off their music, which I wish would have been a literal sensation. The lead singer kind of had a Maria Bamford thing going on, this fragile northern ego that seems brave in the face of overwhelming odds, of which there were many considering how many people were there. She was cool but aloof, but never off-putting in how she dealt with the crowd, and the band mirrored that easy stance.—Syd Bishop

Houndmouth
The illusion of the music critic is that they know everything about all the cool things ahead of time, but insomuch as that applies to Houndmouth, that just wasn’t the case. It’s not that I didn’t familiarize myself with the music, but just that it was a little outside of my wheelhouse in terms of things that might pop randomly on my iPod. Catching them Friday night, I get the hype, even more than talking to their delightfully-friendly guitarist on the phone a few months back. They were a sight to behold, with at least what looked like 8,000 people there to show that kind of hometown support. Their homespun Americana seemed well-earned and sincere, the sort made by folks that just want to tell a good story through song and that they did well. They had some tender moments of the sort that you have to earn, those kinds where you somehow manage to get that many people to settle down while you play your music, which is a remarkable feat in and of itself and a testament to their prowess as performers.—Syd Bishop

Mariachi El Bronx
This was the set for me where I had no expectations going in because I’ve never had the chance to listen to any of their records, but after a friend talked them up, I went to see them. And, when you just stumble on a set and it happens to be great, that’s one of the best experiences you can have at a festival. Clean and cohesive, Mariachi El Bronx — a side project of the L.A. punk band El Bronx — made it obvious that they’ve been playing music together for a while. And with a charismatic frontman who knew how to work the crowd, it was one of the most memorable sets of the weekend.—Scott Recker

Dr. Dundiff and Friends
Dr. Dundiff is a boss producer and as a result of his work has garnered him a number of supporters in the local hip-hop scene. His solo productions are remarkable works of art, a pastiche of jazz and R&B sounds in a manner befitting Stones Throw or Def Jux alumni. Dude knows what he’s doing is the point, so when he brings in the Smoke Shop Boys — the live band that he drums for — it’s going to be undeniably awesome. And it was. This wasn’t just the output of one artist, but a showcase for Louisville hip-hop as a whole. That love and care for everyone involved was apparent from start to delightful finish, whether that involved Shadowpact, 1200, Touch AC, or anyone in between. As a person who has willfully not thrown up the W at a Wu-Tang show (they aren’t the boss of me), I can’t say I am usually moved to crowd participation, but I’ll be damned if a day later I still feel compelled to throw my hands up.—Syd Bishop

Twin Peaks
In the middle of day two, I was ready for some rowdy slacker punk and Twin Peaks delivered. A band that seemed to have dropped and broken all of their collective give-a-fucks, Twin Peaks blazed through a set packed with waves of distortion, jangly leads that were just the right dose of sugar and Mick Jagger-like vocals that always stayed smooth and collected, even on the edge of out-of-control. One of the few bands of the weekend that sounded significantly better live than on record, this was easily one of the best sets and certainly one of the most fun.—Scott Recker

Twin Limb
I’m not sure that there is a band that resonated with me more at this Forecastle than Twin Limb, although there were many that held my interest. A power trio, Twin Limb manages a delicate balance between pre-orchestration and free form goodness; they seem to use sequencing with an equal fervor to live play. The thing for me though, is that they have a laser focus on just writing great music, and don’t seem to give a shit about how they get to that point, be that with computers or acoustic instrumentation. They were a remarkable thing of beauty live, a lithe amalgam of visceral accordion riffs, gentle guitars and triggered drums, all the vehicle for the wonderful vocals. Twin Limb exemplifies the best in Louisville music and do so with a style and grace uniquely their own. For my money, they’re set was one of the absolute best in town, and I only hope that their star keeps rising.—Syd Bishop

White Reaper
Easily one of the most anticipated sets from the weekend, White Reaper delivered exactly what you would hope for. Singer Tony Esposito was all punk fury and youthful sneer, as the band ripped through their set with a breakneck pace that matched the intensity of their music. Their set started off easy enough with someone I didn’t recognize announcing the band, before jumping into the crowd and clobbering audience members in his path, while the band launched into “Cool.” White Reaper are a picture of American cool, of not giving a shit or more precisely in giving just the appropriate amount of a shit in everything that they do, which is primarily directed at just kicking out the loudest jams possible, stacked with the catchiest, most hook-laden riffs around. There was an unforgiving heat during their set, with virtually no shade to be found and any sort of breeze a distant memory, but they still made you want to get off your ass and move.—Syd Bishop