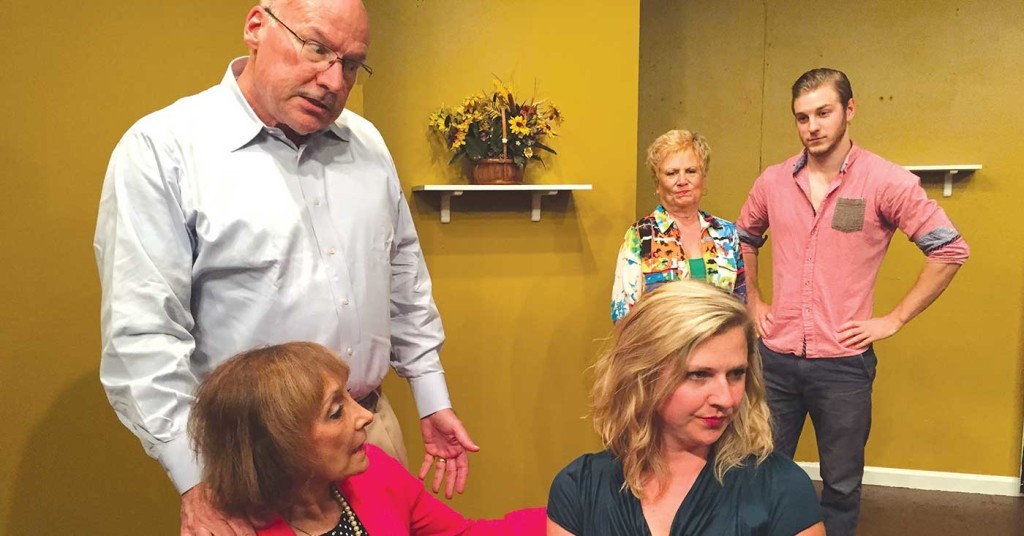 “All happy families are alike,” wrote Tolstoy. And “each unhappy family is unhappy in its own way.” The Wyeths, the family at the center of Jon Robin Baitz’s 2011 play “Other Desert Cities,” inhabit their own peculiar patch of hell. The parents, Lyman (Phil Lynch) and Polly (Carol Dines) are a quintessential conservative power couple. Both had careers in film. He was an actor noted for his many onscreen deaths; she was a screenwriter who collaborated successfully with her sister, Silda (Jackie Carrico). Later, they became powers in California’s Republican party: Lyman was an ambassador, and Polly was a confidante of Nancy Reagan. Now they divide their time between their club and their prosperous Palm Springs home (set designed by Melissa Shepherd and Scot Atkinson), a place with a sweeping view of the desert.

Across the world, in another desert, things aren’t going so well. The play is set at Christmas, 2004. It’s a moment in time when the “mission accomplished” triumphalism over the invasion of Iraq is crumbling. George W. Bush has just been reelected, but headlines are filled with stories about suicide bombers and American soldiers torturing prisoners.

It’s against that backdrop that the Wyatt family assembles for Christmas. Trip (Trevor Fiechter) is a happy-go-lucky producer of sleazy reality TV shows. His sister, Brooke (Lenae McKee Price), once wrote a successful novel — and six years later, after a long bout with depression, she’s just completed another book … on a topic that hasn’t been shared with the family.

Except for Trip — whose political and personal philosophy is pretty much live and let live — this is a family divided by politics. Polly and Lyman are staunch conservatives who love to bait the liberals in the family, Brooke and Silda, mocking their woeful impracticalities and going out of the way to use politically incorrect language (Polly extolls the country club’s offerings of “Chink” food on the Christmas menu). The first half of the play overflows with political banter. Some of it is laugh-out-loud funny (and some, alas, sounds reminiscent of a million Facebook threads).

But the banter, no matter how biting, turns out to be camouflage for a deeper family schism that only gradually reveals itself.

It turns out that there was a third Wyeth child, Henry. Years earlier, during the Vietnam War, Henry was involved with a radical group that bombed a military recruiting station and killed a soldier.

It’s a part of their life that the elder Wyeths have striven to suppress, both publicly and privately. And although Trip was too young at the time for the episode to register, for Brooke, the subsequent loss of her beloved brother was a traumatic, formative event.

And it’s that event, the circumstances around it, and the behavior of her parents at the time, that is the subject of her new book — a memoir that has been accepted by a major publisher and will soon be excerpted in The New Yorker.

The revelation that their lives are about to become a public fodder shatters the glib family façade, and suddenly there’s a high-stakes pitched battle that tests the limits of truth, integrity and loyalty on the homefront. And under the direction of Melissa K. Shepherd, the performances, sometimes arch, sometimes furiously passionate, offer a rich, even-handed treatment of the issues that will irritate and delight folks from pretty much anywhere on the political spectrum.

Last week’s Bardathon brought to an end the first phase of Kentucky Shakespeare’s Shakespeare in Central Park season. I wasn’t able to see Matt Wallace’s production of “Macbeth” until too late to give it a full review in LEO, but like the other plays of the season, “The Tempest” and “Taming of the Shrew,”  it was full of revelations. The opening scenes, which find the hyper-rational Macbeth (Jon Patrick O’Brien) encountering the prescient, chaotic madness of the exquisitely realized Witches (Maggie Lou Rader, Neill Robertson, Megan Massie), was a brilliantly chilling explanation of everything to come. And Gregory Maupin (whose superb performance in “Shrew” I somehow omitted to mention in that review) demonstrated yet again his amazing range and comic genius as the Porter in a performance that nobody who saw it is likely ever to forget.