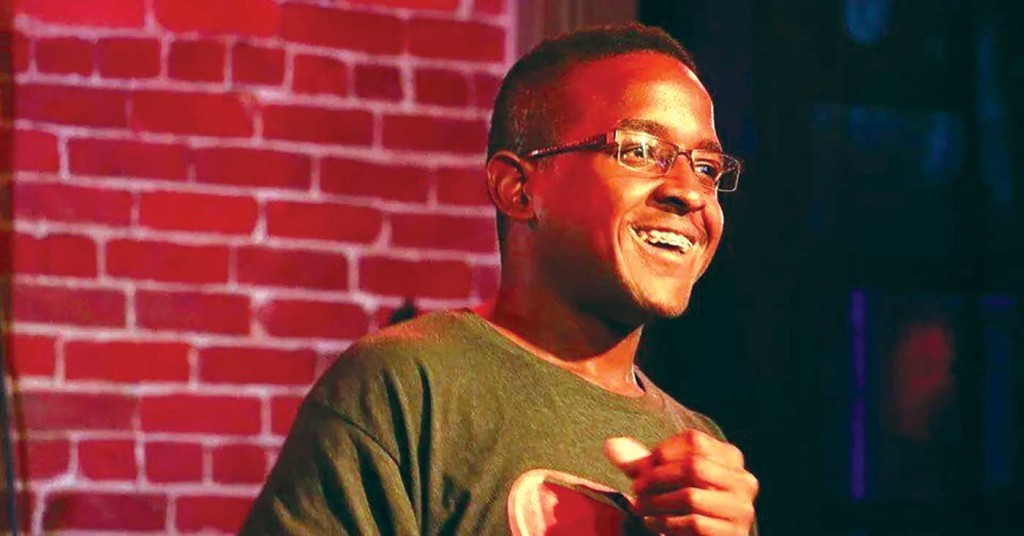 You’ve probably never heard of Maurice Sherrod — a 29-year-old up-and-comer on the burgeoning local comedy scene — but if he has anything to say about it, you will. Sherrod is a freshman in the comedy scene and has struggled to find his footing. While Louisville is not necessarily known as a comedy town, there are plenty of people in the city looking to change that. The Bard’s Town, The Laughing Derby and a few other locations offer a home for the growing comedy scene in town. It’s that community that Sherrod has worked to break into, first by doing open mic nights and now by taking steps toward bigger gigs.

It’s hard to get started. During his formative years, Sherrod did a little acting in school plays. It was this interaction with a crowd that both fueled his passion for performance and helped him get over stage anxiety. Playing Winnie the Pooh put him in the spotlight, but he knew comedy was his real calling.

While musicians and actors can effectively rehearse without a crowd, the only way a comedian can learn to work an audience is to just do it. For Sherrod, there was no other way. He recalls, “I became interested in comedy at a very young age. I was always the kid that could make people laugh, which sounds so cliché, but it’s true. My family use to watch ‘Def Comedy Jam’ whenever we got together. They would always tell me ‘Resse! Go into the other room. This show isn’t for kids!’ Being the rebel that I am, I would military crawl out of sight and watch the show that I was told I couldn’t watch.”

He adds, “I came into comedy after a rough period in my life, which was last year. Things didn’t really go the way I had planned, so instead of speaking with a therapist, I wrote things down on a notepad and transformed them into something funny.”

Like most aspiring comedians, on top of holding down a full-time job, Sherrod works on his material in whatever spaces are afforded to him, be that weekends or lunch breaks. He starts work on a set at various open mic nights in the region and continues to craft his act from there. He explains, “My writing process for my jokes is pretty much a process of elimination: I start with a simple subject, and I go through different ideas in regards to that specific subject, and I’ll test them out to figure out if it flows with the joke. That process has not changed my time on stage, because once I have that final joke I want to present, I am still thinking about ways to make it better.”

Like the best comedians, Sherrod pulls from his own experience. He explains, “I grew up in the West End of Louisville. There were a lot of struggles growing up, like getting evicted and living in a two-bedroom hotel with a family of five. That ties in with my comedy because everyone has had their share of struggles and the only way to get out of that mentally was to focus on using those struggles and making jokes about it. My comedy is true, but as a comedian, sometimes you have to exaggerate the truth to make a complete joke flow as water.”

The people closest to him are often the most critical. He expounds on his process, saying, “I write a lot of jokes about the people that are in my life because they work as a template for my comedy. And it’s not jokes to hurt feelings, but just to offer hilarious insight on the situations I come across with the people in my life. I go over jokes with my mom, and she always says, ‘Resse, you can’t be saying that about me or your uncle’ … or et cetera … all the while she is laughing. Sometimes my mom is my worst critic. But she has shared those experiences with me, so she knows what I am talking about.”

The joke is always a work in progress. Sherrod admits, “A joke is never done after I have written it because with each joke that I use, there are so many ways that the joke can go. And, yes, it can evolve on stage depending on how the crowd reacts to it. If the crowd is busting a gut over a joke, you want to keep adding to that, kind of like adding fuel to the fire: The more fuel you add to the fire, the more it grows.”

You never know when a joke is going to work beforehand. Sherrod employs a simple litmus test though: “If the audience members laugh. And when it doesn’t work, they do not respond. It is definitely something that I learn by trial and error, but that gives me a chance to take that joke and improve it in hopes that the audience could relate to it. The process that I take to test my material on a smaller scale is to just go up and do it. You only live once, and I have to develop the mindset that people won’t always think that I am funny.”

Sherrod sees comedy as an open canvas. For him, “Jokes are not off limits. It depends on what kind of humor the comedian has. I am a storyteller kind of comedian, so I deal with a mixture of different subjects.“

Navigating the comedy world can be difficult. For some, the challenge is overcoming any kind of stage-oriented anxiety or finding their target audience. Sherrod says, “It’s just a myriad of stresses that are involved,” such as “forgetting the joke that you practiced; when the crowd doesn’t respond to anything that you are saying; overthinking the joke that you wrote down; and last minute changes to a joke right before you go on.”

Fortunately for Sherrod, he has found his Cheers, that place where you just fit in. Sherrod explains that his scene “is The Bard’s Town. I practice my routine and work on my stage presence on Thursdays. Getting the gigs is pretty easy, because it is open mic and this place does not make it hard for me to show up, sign in and do my thing.”

That accessibility and ease informs Sherrod’s approach to his craft. He keeps cool even under pressure. He explains how he attends to a crowd that isn’t into it: “I deal with an unreceptive crowd by going on with my routine. Eventually the crowd will take notice and listen. I have not dealt with any hecklers, but when the time comes to deal with that situation, I will definitely get the heckler involved in my act.”

He stays positive and sincerely appreciates the city’s comedy scene. Even with his limited experience he notes, “Louisville as a comedy crowd is pretty decent. It just depends on which jokes I present, and if the audience can relate, then it makes for a good night.”

At the end of the day, Sherrod keeps it simple. He admits his ultimate goal “is to stay consistent with my comedy. The place I would like to go is to have my own one-hour special on Comedy Central. The only way I that I can get there is through hard work because nothing in this world is free.”