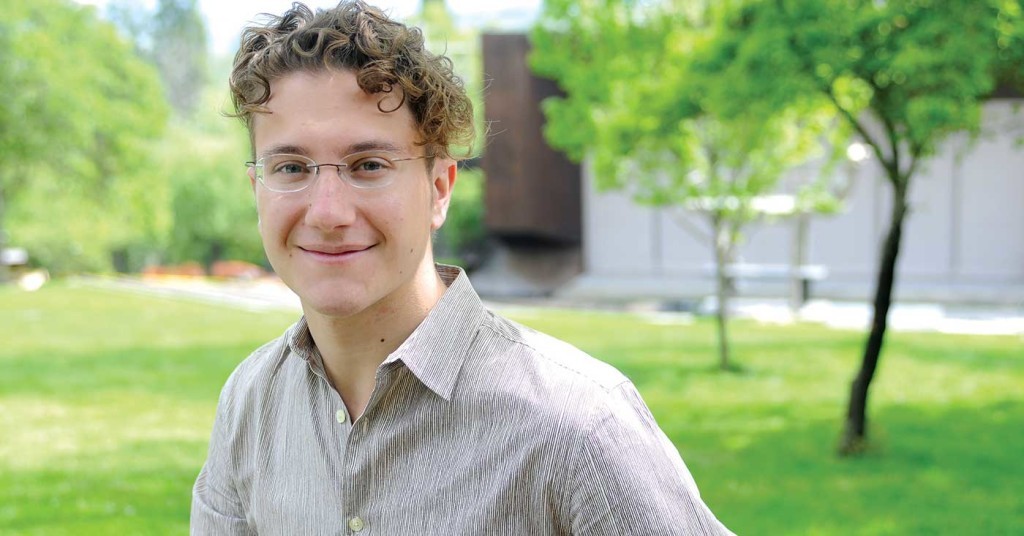 Sunset over the Ohio — check

So with that, and a few hundred other organizational details, Louisville Orchestra Waterfront 4th, fueled by Thornton’s, is ready, set, go! for Saturday, July 4, Waterfront Park, 5 p.m. — with the orchestra on stage at 8:30 p.m.

And that’s a story within a story, because an appearance on the city’s biggest festival stage, on the country’s biggest day, could mark a milestone moment in the resurgence of the Louisville Orchestra. With a crowd of perhaps 20,000 expected to stretch across the Great Lawn at Louisville’s Waterfront Park, the event could produce the largest audience in Louisville Orchestra history. That’s over a 78-year run going back to the symphony’s founding in 1937.

Which fits nicely into music director Teddy Abrams’ vision for his orchestra. He thinks a big showstopper public concert on the Fourth of July is exactly the role the symphony should be playing.

“The Louisville Orchestra has made it its mission this entire last season, ever since I got here, to make our music available and exciting and fun and meaningful to everybody in Louisville,” says Abrams, who took the baton to lead the Louisville Orchestra in August of 2014 — and immediately stepped on the accelerator to get the grand old thing running into the 21st Century.

Which means being seen, and heard, says Abrams.

“We’ve been looking for as many opportunities as possible to share our music-making with the broadest community, because there is a perception, a stereotype of orchestras — and all traditional art — of being a very narrow band of reach within the community. Not necessarily being for everyone. I think one of the great things about Louisville right now is that all the arts are blowing open that stereotype.”

Abrams grew up in the Bay Area of California, and came into classical music with the San Francisco Symphony and conductor Michael Tilson Thomas. So he’s new to Louisville and the ups and downs of the Louisville Orchestra. But from the outset of his tenure he’s focused on the upside, citing the exciting days of the 1950s and ’60s when the Louisville Orchestra earned a national reputation for pioneering recordings of new music. And not so much its recent funding problems. Those kind of financial difficulties aren’t local to Louisville, anyhow.

Financial strains have afflicted classical musical groups all across the country. Some symphonies have failed, or continue to struggle, but others have bounced back with real vigor and are now riding an upward wave. In Louisville, a change in the orchestra board brought a very positive re-commitment. Abrams was brought in from San Francisco (and Detroit, Miami, Philadelphia and Oregon — he’s as all over the place nationally as he’s all around town in Louisville) to bring a new fire to the Louisville Orchestra. It is Abrams’ first head symphonic post, and the day he was appointed music director of the Louisville Orchestra he became the youngest conductor, at 27, to lead a major symphony in North America.

It was an eyebrow-raising moment, but orchestra fans loved the fresh start.

“I remember when I came here, when people heard about the orchestra at all, it was usually bad news,” says Abrams. “Now when I run into people they have so much to say about what is going on, and what they’re excited about — what they want to tell me. I’m so excited about that.”

“It’s unbelievable the energy Teddy has brought to our community, and music in general — making the orchestra something for the entire community,” says Karem. “For Waterfront Fourth he doesn’t just present the orchestra, but brings other kinds of music, hip hop, Ben Sollee. This isn’t your father’s Oldsmobile, or, what is it, your mother’s Buick? — however that ad goes. This is a new kind of Louisville Orchestra.”

Music on a lawn in summertime is, of course, a most American thing. And doing it up right on Independence Day: You’ve got marching bands and silver-saddled horses parading on the Fourth of July at the Prescott (Arizona) Rodeo; the nationally-televised “A Capitol Fourth” concert from steps of the U. S. Capitol. And smaller celebrations, too, with the hometown band playing Sousa marches on the town square bandstand beneath shady old oaks and elms, blankets and lawn chairs on the lawn, and kids waving American flags. This weekend Garrison Keillor will report that once again the Sons of Canute led the Fourth of July parade in Lake Wobegone.

But the quintessentially American Fourth of July might be the annual “Boston Pops Fireworks Spectacular” concert staged by the Boston Pops and conductor Keith Lockhart on the Charles River Esplanade — a setting dating back to the founding of the Massachusetts Bay Colony in 1630.

But those wonderful settings won’t out-history Louisville’s Waterfront Park on the Ohio River, says Karem, offering a visage of hardy pioneer families crossing the Alleghenies and floating down our Ohio River on the way to filling up the interior of the new United States.

“We’ll have the stage placed just right, timed to that night to frame the concert in the sunset over the Ohio,” says Karem. “For the first time, we will have big television screens for listeners to see the performers up close, with Teddy Abrams narrating the show.” Karem says the fireworks display will be produced by Zambelli Fireworks, shot from a barge on the Ohio.

Waterfront events manager Ashley Smith notes three arts organizations are collaborating to put on special programs for kids, starting at 5 p.m. “First, they’ll take a class in how to conduct music, then they’ll make their own instruments, and, finally, put on their own show,” Smith says. She also promises Kentucky-inspired food and a Louisville-style beer garden, with indy bands and folk singers entertaining in the run-up to the orchestra downbeat.

It is Smith who provides a cautious attendance estimate of maybe 20,000 people. And she should have some idea. Over the summers, the Waterfront Park music scene has exploded in popularity, from the annual Forecastle show, to wildly popular WFPK Waterfront Wednesdays. Last week, with Bela Fleck, Abigail Washburn and Pokey LaFarge on the bill, Waterfront Wednesday drew what many regulars reported as the event’s biggest-ever throng, with thousands setting up camp on the grassy lawn at the Big Four Bridge, and more taking a birds-eye view from the Big Four’s curling ramp.

The Louisville Orchestra has a history of successful summer concert series runs — but it’s been dotted on and off. Long ago the orchestra played summers at the old Iroquois Amphitheater, where streetcars brought audiences to concerts. In the 1980s the ensemble set up for pops concerts at Bernheim Forest, playing from under a big fabric shell that glowed with the setting sun. Then came the popular Roarchestra Series at the Louisville Zoo. The orchestra has also played previous Fourth of July programs at Waterfront and did one Fourth from the concert barge at Jeffersonville’s RiverStage.

But this is bigger. This is a big boom of a big bass drum — with a hoped-for audience that reaches far beyond the orchestra’s regular following.

Of course, serious classical music remains the Louisville Orchestra’s primary focus, but the group gets out and about across the musical spectrum. That’s the beauty of a top-class symphony: its musicians can play anything, and do. This week, on Thursday the orchestra plays a “Journey” tribute concert at the new Iroquois Amphitheater. On Friday it’s in Glasgow, Kentucky, for a “Concert on the Square.” Then back Saturday for Waterfront Fourth.

Then the clouds opened up.

“We had a tremendous amount of rain, but we wouldn’t let it be rained out,” recalls Abrams. “We just moved inside and the party went on. That was the Beethoven concert, but we also wanted to showcase the youth groups we’ve been working with all year, the Louisville Leopard Percussionists and the Trash Band Landfill Orchestra. We took the whole thing indoors in the Kentucky Center for the Arts. So we turned on a dime for that.”

As noted, all orchestras do those kinds of things. Abrams, himself, however, has brought a new vibe to the ensemble’s image. He lives downtown, and gets around the clubs and music halls. He’ll be doing something at Decca, or the Mercury Ballroom, or playing piano for singing star Storm Large at the Bard’s Town. You might run into Teddy on the sidewalk on East Market, or just off stage visiting with local musicians.

“We have musicians who live here who are tremendous supporters of the arts,” says Abrams. “I’ve been blown away by people like Ben Sollee, Jim James and Will Oldham, who get up and support music in Louisville. I feel like I do, too.”

So on to the Louisville Orchestra Waterfront Fourth comes cellist-folk singer-activist Ben Sollee and rap artist Jecorey Arthur (aka 1200).

“My thing,” says Abrams, “is to break the musical barriers, so we’ll have two artists soloing with orchestra.

“Ben is a great representative of the entire state, and he has a great personality, so he’s the perfect person for performing with the orchestra. I’ve known Ben since before I got the job. He encouraged me to come here.”

Abrams notes that Jecorey Arthur is a classically-trained percussionist, who likes to add further orchestration to his “1200” sound.

“Jecorey does the lead, he does the raps, but he can add the orchestral complement. So we’ve expanded the arrangements for full orchestra for this occasion — which is really awesome.”

One thing for sure is Teddy Abrams is not your father’s Buick kind of maestro. He’s a young guy ready to roll. Like an up-to-date version of Professor Harold Hill in the “Music Man,” Abrams has gotten up a head of steam to get his band out front and leading the musical parade in River City.

With enticements added, including fireworks.

“Of course, the fireworks are going to be spectacular — Louisville does fireworks better than anyone,” says Abrams. “What I want people to do is come for the fireworks, and stay for the
orchestra.”