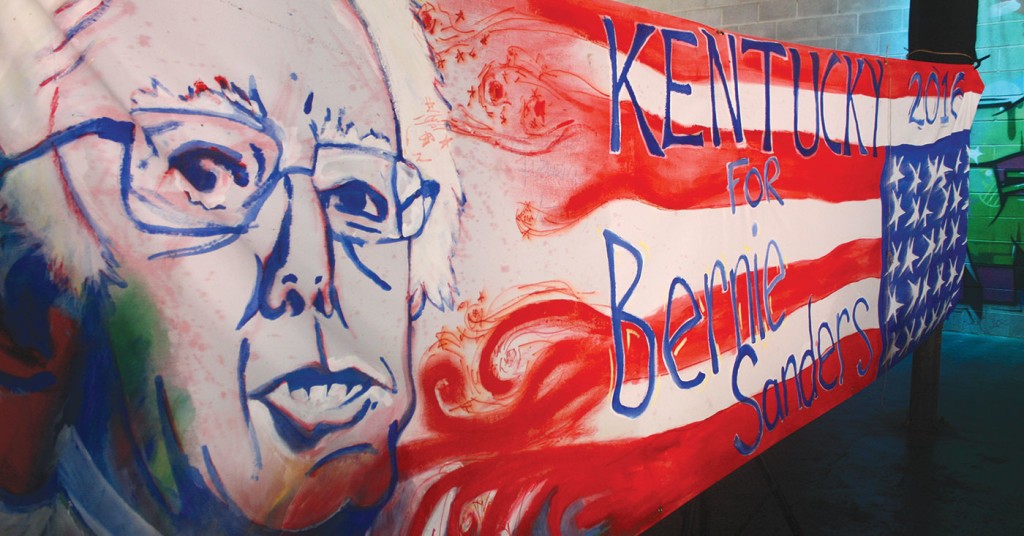 If the passion and focus of the organizers, volunteers and performers wasn’t an indication of the push behind Sunday’s rally at the Tim Faulkner Gallery in Portland, the banner certainly was. Local artist Mathieu Blake explained that the decision he and the other artists — Alexandra Pavek, Angela Ramsey and Eclus — made to depict the American flag upside down was not meant as a sign of disrespect.

Rally organizer Daniel Sherrill admitted he was surprised how quickly the event grew in such a short amount of time. “I expected maybe a hundred people and maybe three bands,” he told the audience that came out to support a presidential candidate who, according to conventional wisdom and mainstream media, does not have a chance.

One thing that resonated throughout the day, besides the heat, was the sense of optimism among the volunteers, organizers and attendees. The other thing that resonated was the fact that most of the key organizers had little or no political campaign experience before the rally. Organizers were expecting around 1,600 people, based on the number of Facebook RSVPs. Volunteer coordinator Tom Stevens — who was one of the couple of people with political campaign experience — said the event was really organized at the last minute. Within a week of the event being posted on Facebook, he said, it was clear that it could be much bigger than anyone was planning.

Of course, anyone who has used Facebook understands and has probably contributed to the phenomenon of Facebook inflation — the tendency for people to indicate they will attend events and then not show up. This did not dissuade any of the organizers, volunteers or performers, however. Volunteer sign-up coordinator and Kentucky for Bernie Sanders Facebook page administrator Scott Lee was on point to answer questions and to take down information for people interested in volunteering for future events. Attendees were asked to sign in at one of three tables so that an accurate count could be kept. Food trucks were set up in the back parking lot to accommodate anyone’s hunger and the bar was open to quench people’s thirst. A table was set up in the middle of the main gallery for those who either needed to register to vote or those who wanted to switch their party affiliation.

According to Sherrill, one of the more crucial indicators that the Bernie Sanders campaign is gaining ground is not that it’s simply liberals and moderate Democrats tired of Hillary Clinton’s media status as the already coronated candidate who are flocking to the Vermont Senator’s campaign. He claims that Republicans are switching affiliation as well, which bears out according to The Daily Kos and MSNBC’s Morning Joe.

“The number one reason why I support Bernie Sanders,” said Sherrill, “and this is the reason why you see a lot of crossover support from Republicans and all spots in the political spectrum, is that he is the only candidate that is not supported by the billionaire class.”

He added that the Hillary campaign is almost entirely a corporate supported campaign. “They go out, they have the expensive fundraisers. This [Sanders campaign] is total opposite. The people found Bernie and then Bernie decided to run. And now people are coming out of the woodwork.”

The day’s events began in proper folk fashion with local musician and labor organizer John Paul Wright singing Joe Hill and talking Eugene Debs. Wright told the early afternoon audience to keep in mind that while all of Sanders’ populism and progressivism sounds great, but these ideas have been around for a long time, citing labor activist Eugene Debs and former Vice President Henry Wallace, who ran for President as a progressive in 1948. He also pointed out that while Bernie Sanders’ run for the Democratic nomination was the focus of the rally, that no campaign or social movement wins by just relying on politicians.

“That’s what I like about what Bernie Sanders says,” Wright said. “He says ‘we’ a lot.”

While Wright places Senator Sanders in the context of the long-standing populist progressive movement, the thing most media outlets seem to focus on — when, indeed, they pay attention at all — is Sanders’ statement that he is a democratic socialist.

For Sherrill, the problem isn’t that Sanders claims to be a socialist. “For me the biggest problem with the word ‘socialism’ is that people don’t know the difference between North Korean-style communism and the socialism of European social democracies such as Germany, Norway and Sweden.”

Other performers included local band the Tunesmiths, who led the audience in a chant and closed with their song “Crime Times,” local contortionist Jeannette Martinez and local bands Troubadour Bliss. Decline Effect and Riley & Price.

The evening ended with Tom Boone and the Back Porch Pickers, but not before local poet and Gonzo master Ron Whitehead electrified the audience with some of his poetry. His message to those Democrats and others who “trash Bernie Sanders because he voted for this or voted for that” was “look at the candidates we have running for President in 2016. I sure as hell am not voting for no Republican. And I sure as hell don’t want another Clinton.”

Stevens said “This whole thing is amazing accident.” The event was originally meant to be a small gathering of Bernie Sanders supporters, but between the Sanders campaign growing visibility and the stark contrast of his campaign versus Hillary Clinton’s, it became clear very quickly that the event could balloon into much more.

In the end, about a third of those who RSVP’d on Facebook attended the daylong event. Stevens said that, in addition, nearly a hundred people signed up to and volunteer for future events, which Sherrill and Stevens both saw as a good first step towards organizing Kentuckians around Bernie Sanders as a candidate.