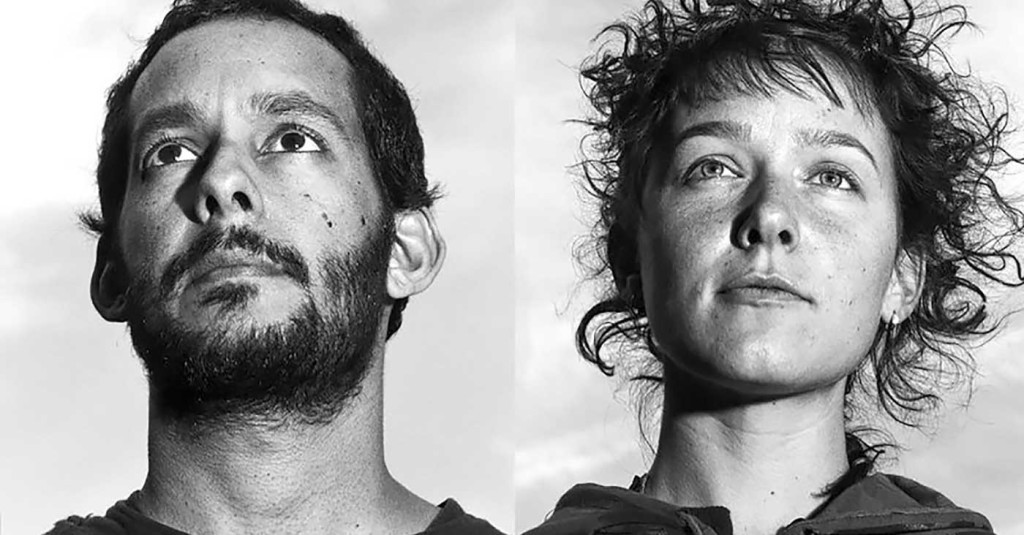 It’s rare to encounter a band that sounds both strikingly familiar and wholly unique at the same time, but that’s how it is with Buke and Gase, the duo Arone Dyer and Aron Sanchez. The pair builds on the merits of unconventional instrumentation — the titular buke, a baritone ukulele, and the gase, a guitar/bass hybrid. Together Dyer and Sanchez make a big sound with their homemade instruments, one that defies ready description. Equal parts angular indie, singer-songwriter folk and prog rock, Buke and Gase are as imminently listenable as they are peerless.

From their earliest days, music was always part of their lives. It’s no wonder then that the two pioneers would find and subsequently collaborate with one another. For Dyer, music “was a part of daily life — dad played guitar, everyone sang, sister and I both took piano lessons in order to get into the percussion section of school and marching band. I always sang long, laborious, nonsensical improvisations, so when school choir became available it was nearly mandatory for me. Parents were like, ‘Please! Teach her some structure!’ Ha. Good luck.”

Likewise, Sanchez had a similar experience: “Music was all around me as a child. My dad played percussion, and there were lots of records and music in my house. I took private lessons on several instruments, piano mostly.”

Luthiery, the making and maintenance of a guitar, is a tricky business. So how do Dyer and Sanchez approach their craft, considering that they are literally building their sound from the ground up?

“A bit of trial and error and wanting to do something different,” Sanchez says. “We had a drummer at one point early on, but they left and we continued on as a duo and decided to cover the percussion ourselves. I was already playing the gase from a previous project. We just kept sculpting a sound world from the few elements we had. Having limitations is a large part of what we do both compositionally and sonically. I’m not sure how our playing has evolved over the years — hopefully we’ve gotten better. Lately we’re learning how to do even more with less, so we’re focusing on not maximizing so much all the time, something we’ve had a tendency to do in the past.”

Given that premium on limitation, the band makes a beautiful noise. Theirs is an economy of motion though.

“It’s logistical, or to be precise — economical,” Sanchez says. “I would not be opposed to another member, but the occasion of that happening has never presented itself. They would also have to put up with how crazy we are. That said, we have been expanding our sound through our own means, technically. That will become evident on our next release.”

Dyer offers a different perspective though: “There are lots of musicians who we’d work well with, I think, and a few whom we’ve met and played with already. Whether we could make a ‘band’ with them or not isn’t entirely up to our ‘wanting’ them in our project or not. Many of the musicians I want to work with are already extremely busy.”

That kind of DIY punk sensibility is certainly visible in their approach to music and their craft. How is that present in their music? Sanchez believes “punk/indie manifests itself in the obvious tonalities and dissonance in our music and instrumentation. We do engage in and have grown up among a sort of punk/indie scene in New York, but I think we feel that has really splintered off into many other worlds. It has been part of our directive as a project to be very dexterous in our musical affiliations, and so we experiment with different modes of music making within our limited, compact unit. Our insistence on being a duo and playing everything ourselves could be called punk, but overall, the labels punk or indie are not attributes we aspire to.”

At the end of the day though, it’s all about just putting on a good show, regardless of how you got there. Dyer’s optimism is obvious and almost tangible. She believes that “a good show is when I can’t stop smiling. An extraordinary show is when Aron smiles too.”

It’s important to both that they make that happen every night that they’re out there.

“I think my responsibility is to fall in love with everyone in the room,” Dyer says. “Usually that happens pretty easily. All I expect from them is an open door. Whether they let me and my awesome Tupperware in or not is their choice.”