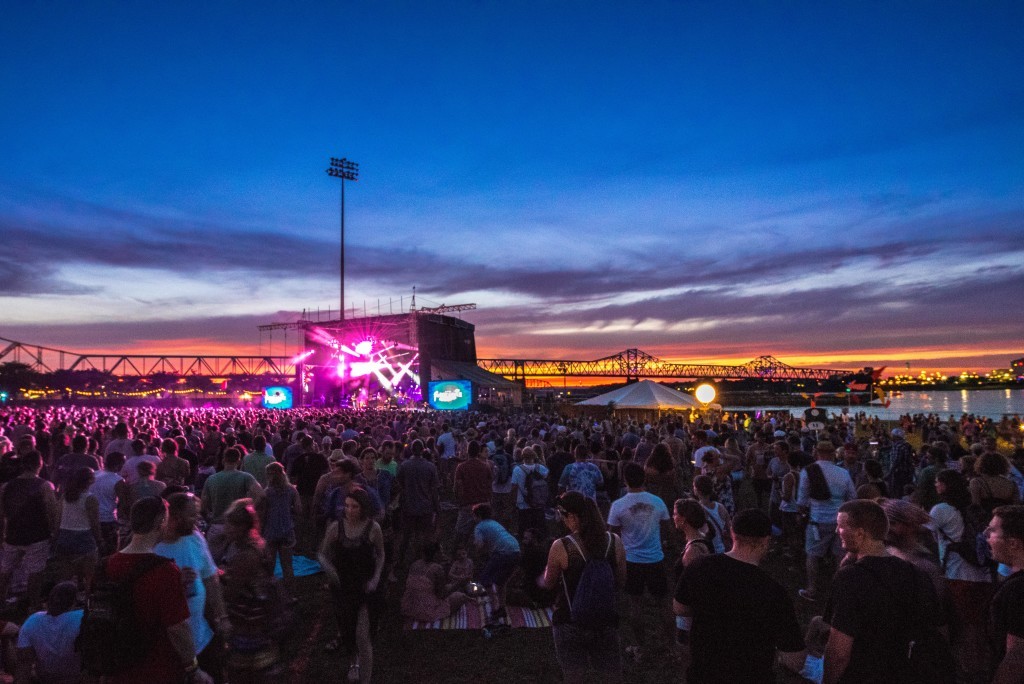 [Above photo by John Miller]

The music at Forecastle this year was top notch, but for my recap I’m not going to spend anytime talking about my favorite acts, biggest disappointments or anything of that nature. Instead I want to talk about “haters.” Now, I hate the phrase “hater,” which categorically makes me a “hater” … but what can you do? The phrase “hater” (going to end quotes around hater now because it’s too much) is a catch-all, sometimes used as an excuse for being ripped on, sometimes warranted and most often attributed to people who just want to bring something down that they don’t fully understand.  For my 2015 Forecastle Festival recap, I want to address any remaining Forecastle haters out there.

On Sunday night, I arrived home exhausted from the heat like everyone else. After a cold shower and a big glass of water I logged on to Facebook to see what everyone thought of the festival. As the Internet goes, 99.9% of the comments were above and beyond complimentary … but then there were a few statuses of friends who didn’t attend the festival. Comments blared on my screen like: “Did you all enjoy the corporate music festival this weekend?” “Why did you all waste that much money when you could have supported x amount of local shows.” “AC Entertainment runs Forecastle now, not locals!” Then a bunch of cat photos and political musings.

First, let’s address Forecastle being a “corporate music festival.”  Yeah, I’m with you (throws up peace sign), corporations should stay away from music, and I roll my eyes too when I see Monster Energy presents blank blank. Here’s the thing … the next time you go to a major music festival, start noting all the small things. The miles of fences around the festival grounds, the port-a-potties, the massive stages, the security, the stage staff, not to mention the headlining-band guarantees … numbers that will make you choke.

The reason Forecastle has to be sponsored by corporations is simple … the higher the cost to throw said festival = the higher the overhead. Why not local sponsors or independent companies? This is simply a utopian concept. If you look at what Forecastle has done over the years, they try to fill up their sponsorships with as many local and independent companies as possible, but sponsors like Ford, Mountain Dew, Heineken, HTC, Verizon … these are the people with the big bucks. Finally, if you want to point out the “corporate sponsors” when hating on Forecastle, please remember to also mention that Eco Vessel, Kynect, the Kentucky Distillers Association and Louisville grocery store ValuMarket are also official sponsors … not to mention all under the seal of being a certified “Clean Energy Partner.”

Now let’s talk about the fact that a Tennessee company, AC Entertainment, has come on over the last few years to run the festival. Forecastle haters love mentioning this. Imagine throwing a house party. You have to get some food, some drinks, cleaning supplies to make your space tidy, and so on. The day of hosting the party, you’re running around like mad trying to get everything perfect. Now, let’s imagine you’re throwing a party for 60,000 people. Do you know how to do that and keep everyone safe? Also, you need to arrange for three days of live music and let me tell you, everyone is going to have a say on what you should have booked and why this years lineup (party) isn’t as good as last year.

The point is, I love the fact that JK McKnight started Forecastle all his own and grew the festival to where it is now, but we all have to be realistic, once 20,000 people or more started showing up, help was needed. AC Entertainment is a proven company that is behind Bonnaroo, one of the biggest music festivals.  Year in and year out, since AC Entertainment signed on, the festival has consistently been one of the smoothest run and most enjoyable festivals I’ve ever been to. AC Entertainment didn’t “take over Forecastle” — they made it possible to grow to what it’s become today. Last Friday, the entire festival of an estimated 10,000 plus attendees had to be evacuated safely due to extreme weather conditions. They cleared the grounds in a rumored ten minutes. It’s because of the professionalism and experience of AC Entertainment that safety, comfort and quality are all consistent staples of Forecastle.

Lastly, there is this really annoying hater point about smaller festivals in Louisville. The most common gripe is, “Why go to Forecastle when you can support _______”.  The week before Forecastle, locals threw an utterly amazing small festival called Poorcastle. The talk in the two-week span between the two festivals was why do the one that costs so much more money when you can support local? I hate this thought because it’s not an either-or thing. They are two very different festivals in terms of scope, and I fully support both. Poorcastle packs in 30 plus smaller exposure local bands, and Forecastle brings Louisville millions of dollars in revenue. Poorcastle has an intimate feel that’s extremely special, and Forecastle allows Louisville to have one of the largest music festivals in America every year, which brings national attention to our city.  Haters who like to say “don’t support this, because we have this” are basically arguing to the point of don’t drink water when you can get some sleep. Both things are great and entirely different.

I’m sorry haters, I really am. Forecastle Festival goes out of their way to support our beautiful city of Louisville. In fact, this year over 30 local musicians were featured across all four stages big and small. Hometown favorites My Morning Jacket closed out the marquee night and just 24 hours earlier locals Houndmouth played a coveted late-night slot on a big stage. The festival featured “Kentucky Landing,” an entire area of Kentucky-based business. The food trucks I hit were all local including Lil’ Cheezers and Holy Mole. In the end, Forecastle is for Louisville all the way, and the people of Louisville should rally behind the festival. Haters, get on board.