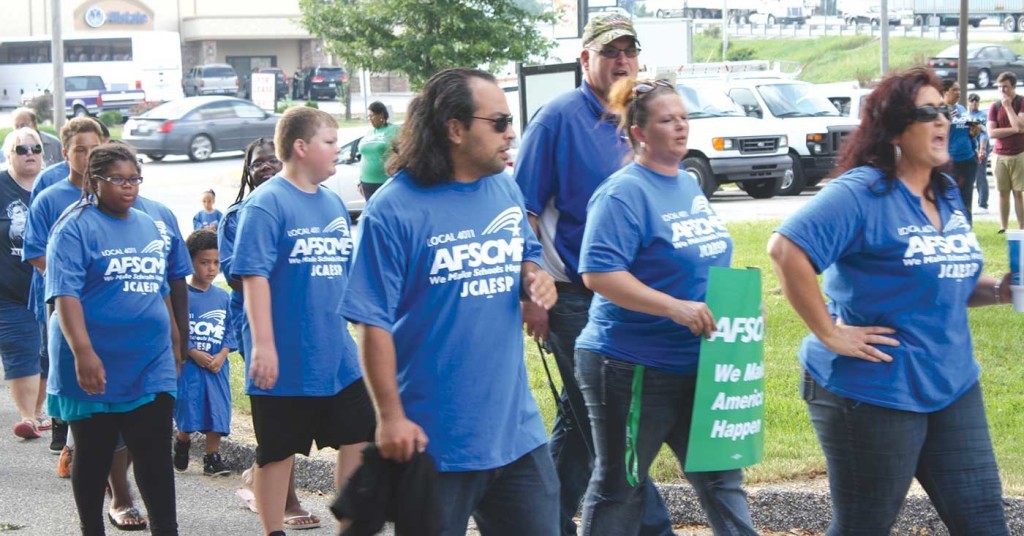 Bonifacio Aleman and Sandy Mayes leading the rally in a march and chant.Mick Parsons

Before the July 27 school board meeting,  JCPS employees — who are members of the American Federation of State, County, and Municipal Employees Local 4011 (AFSCME) — rallied outside the Vanhoose Building to protest what union leaders say is a continued unwillingness on the part of management to negotiate wages as is required by the contract between the district and the union.

How we got back here

Around this time last year, members of the Jefferson County Teacher’s Association (JCTA) and members of AFSCME rallied before a school board meeting to protest inadequate wages. The audience at the meeting was so large that the meeting room was filled and an extra room had to be opened to accommodate them all. At the end of it, everyone got a one percent increase — but only because of the increase mandated to all public school employees in Governor Beshear’s 2014–2015 budget.

Raisor says the problem was not any unwillingness on the part of the district to negotiate. He claims the district was trying to protect employees from additional union fees. “Neither the negotiation team nor the board was interested in unilaterally raising the membership of AFSCME’s dues.”

Union officials maintain, however, that the district never had any intention of negotiating with them.

Burcham recalled there was one face-to-face meeting around June 14, 2014, about 9:30 in the morning. “They presented us with their last, best and final offer,” he said. “Any sort of negotiation like this is going to take more than day. It seems very clear that they had no intention of negotiating with us.”

Carli Stevenson, AFSCME communication coordinator, added, “We would take exception to even the characterization of an impasse, because that implies that it’s a two-sided issue and that we had been negotiating. They refused to negotiate with us. You can’t have an impasse if you aren’t negotiating.”

Local 4011 President Sandy Mayes said, “Our contract says we can go to them anytime as long as everyone agrees. So we went to the board about dues to get rid of the tiered dues system and move to the same kind of system every other union uses.”

Burcham accused Raisor and the school board of manipulating the dues issue in an “inaccurate and inflammatory way” through direct communication with union members. A July 14, 2014, email to all AFSCME members accused the union of trying to raise dues. The email — sent a full month after the only face-to-face meeting — also assured union members in bold letters that “JCPS does not believe allowing additional dues payments is in the best interest of our employees and will not consent to AFSCME’s demand to take more dues from [members].”

Burcham maintained the union never suggested raising dues, but that it was about altering the dues structure, so that employees who are enjoying union benefits and not paying for them will contribute.

Raisor said the JCPS communications office sent out that email, but only after AFSCME sent out an email of its own claiming the impasse was about wages.

This communication breakdown led to AFSCME’s filing the grievance against the school district. Both sides are waiting for the arbitration process, which should happen sometime this fall.

As the group of protesters marched around the parking lot on July 27, semi-trucks and motorists driving by on Newburg Road honked to show their support. Approximately 40 union members, as well as supporting members from JCTA, came out to show that this issue and the livelihood of classified workers — teachers’ aides, janitors, clerks and other integral support staff — matters. JCTA Vice President Tammy Berlin said, “Whenever our brothers and sisters in the classroom ask for our help, we show up.”

Raisor claimed the issue stems from what he insists is a mischaracterization of the situation. He added that the wage package has a two-year shelf life and that the wage re-opener will occur next year. Burcham claimed the issue is that management wanted the wage package to carry over to this year as well, “which also violates our contract because they unilaterally altered our contract without our permission.”

Wages are a constant issue, though, for both sides. Management maintains the district will have trouble paying the state-mandated one to two percent yearly increases. The union claims the district has already tried to save money on the backs of its members by trying to force a two-day furlough on them. Raisor claims it was an attempt to balance the pay calendar to 260 working days instead of 262. The additional two days, according to the COO, were the result of leap year and other issues tied to the calendar. The district has already streamlined in an attempt to save money by outsourcing its legal department, but Raisor still expressed concern that the mandated raises will cause a shortfall in the $1 billion budget.

Management has not yet sat down with the union to discuss wages and compensation. According to Article 25, Section 3 of AFSCME’s contract, compensation negotiations — the only section of the contract up for negotiation every year during the length of the contract — are to happen in June. Activist and organizer Bonifacio Aleman spoke to the school board and articulated what he, Mayes, Burcham and Stevenson claim this issue is about: “As we stand here today, with only four days left in the month of July, we know that JCPS has not attempted to negotiate compensation and wages with classified workers.”

Raisor maintains that the district does not have to negotiate compensation because of the two-year package the district instituted last year. However, the language of the contract states that Article 10 — or wages are “re-opened for negotiations for the 2013–14 school year and each subsequent year unless bargained otherwise. Bargaining will occur during the month of June each year specified in the collective bargaining agreement.”

Protestors want fair wages and fair treatment. Union leadership maintains that in order for that to happen, the union and the district have to actually have negotiations, as per the contract. Both sides will probably wait for the grievance process to run its course before anything happens, however.