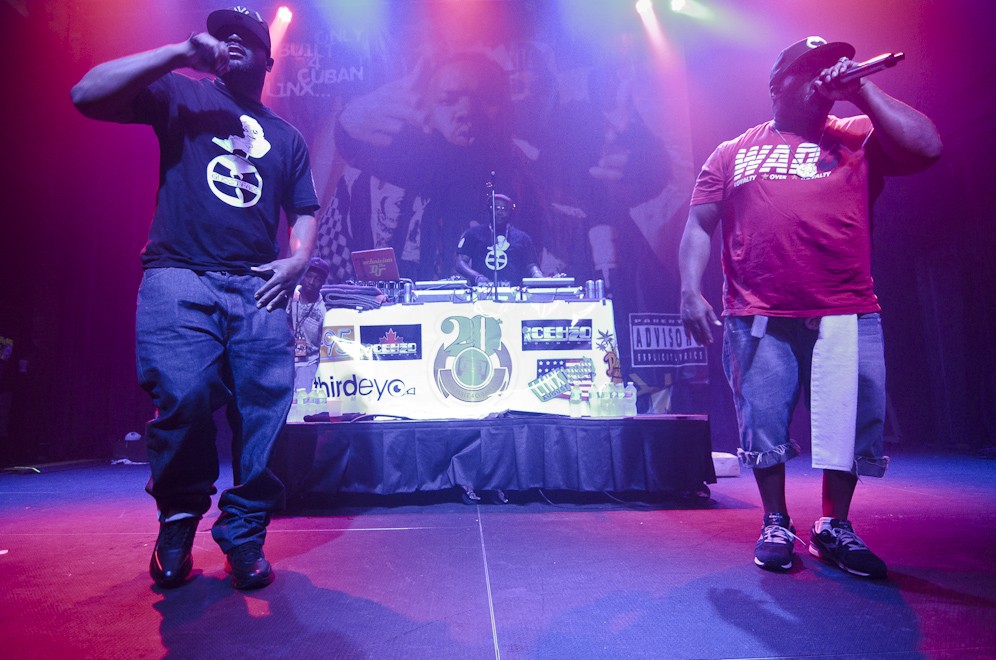 In an interview that I caught on MTVU a few years ago, an aspiring, college-aged journalist asked Ghostface Killah what it was like post-show. The kid asking the question obviously expected some remarkable tale of debauchery, but Ghost just answered that he went to bed, or rather, “I’m looking for that pillow, son.” Something like that. You could call that being smart-ass, but Ghostface — aka Tony Starks — isn’t quite known for his sass; I’d just call it the pragmatic wisdom of someone who knows what they want, and knows how to take care of business. It was that business sense that was most apparent at The Mercury Ballroom last night. Ghost and Raekwon the Chef, two founders of the Wu-Tang Clan and longtime veteran emcees, conducted themselves with the kind of calculated stride reserved for those long in the game. They knew what they were doing and they went at it in their own way.

I missed the local opener. I heard he hustles in the scene, but I’m new to him. When they said doors at 8, I assumed that in true Louisville fashion it would start hours later, not quite ideal for my work week, but a sacrifice I was prepared to make to see to legends in action. I arrived in time to hear the national support, Dillon Cooper, on stage. After a brief snafu at the box office, I made it inside in time to catch the tail end of his set. From what I could see, he had a solid command of the crowd, and his beats were pretty standard east coast hip-hop, classic and leaning into R&B in all the right ways.

There was approximately 45 minutes between Dillon Cooper and Ghost and Rae, and it felt like an eternity lost in a sea of college kids exploring hip-hop like it’s some lost continent. Fortunately, the DJ for the Wu-Tang duo came out and fucking killed it. He had some choice lines to get the crowd pumped too — which he definitely did — making an impassioned plea for the ladies to “get out their titties” (I never said he was classy), or that he wasn’t “scared of y’all motherfuckers.”

It was safe to assume then that since he wasn’t scared of the crowd, that we should maybe be scared of him, which defined a certain playful antagonism for the set that slowly lost steam as Raekwon then Ghostface came out and went through the hits. They ran through choice cuts from the seminal “Only Built 4 a Cuban Linx,” and some Wu-Tang classics. It seemed much lighter on tracks from Ghostface’s solo career, which was a bit of a bummer for me, but fun all the same. The Wu tracks especially stood out, more for nostalgia than anything else.

The set hinged on that very nostalgia, with Raekwon taking to the mic to talk about how long they’ve been in the game. It showed too, both in their prowess as emcees and in their overall restraint. Neither of these fellas are trying to jump into the crowd or do a backflip, showing that same sense of quiet restraint that Ghostface gave in that interview. After the set, they promised to come out and sign things, and I’m sad to report that didn’t seem to be true, as my beautiful date and I awaited their arrival. My hope, at least for their sake, is that they were looking for that pillow, son.