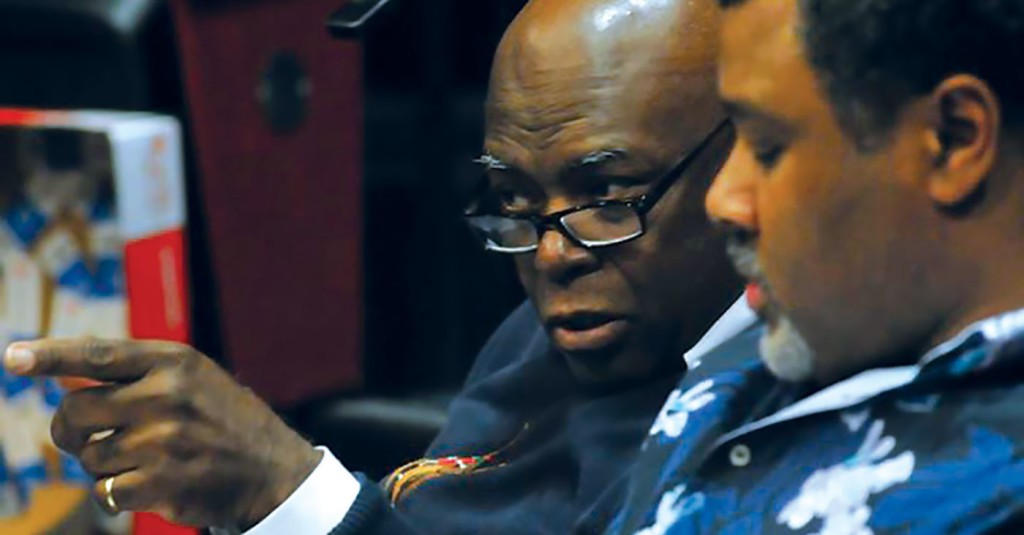 As a playwright, Larry Muhammad serves two muses. He relishes the imaginative freedom he finds in what he calls his “urban” plays, where he delves into fictional scenarios like a sibling rivalry that plays out between two women professional wrestlers (“Booty of the Year”) or a strange episode in the life of a police dispatcher (“Radio Play”).

Meanwhile — perhaps not surprisingly, given his long career as a journalist — he’s also carved out a remarkable niche as an author of “historical” plays that trace the arc of the African-American experience in Kentucky over a period of nearly 200 years. His subjects have included the enslaved Stephen Bishop, the first great explorer of Mammoth Cave (“The Magnificent Stephen”); Jimmy Winkfield, whose Kentucky Derby wins in 1901 and 1902 were just the opening salvos in an amazing equine career that found him riding for Czar Nicholas II of Russia, fleeing the Russian Revolution, settling in France, fleeing the Nazis, returning to the U.S., where he was both honored and subjected to the indignities of Jim Crow segregation (“Jockey Jim”); Henry Bain, who is best remembered as the inventor of Henry Bain’s sauce but whose story is emblematic of the rising African-American middle class at the beginning of the 20th century; and Frank Stanley, Sr., the powerful and influential publisher of “The Louisville Defender” from the 1930s through the 1970s (“Double V”).

Now, in “Buster!” a musical that premieres this week, he takes up the story of the Rev. Louis Coleman, whose civil rights leadership and activism reshaped the history of Louisville during the last quarter of the 20th century.

In a phone interview, Muhammad said, “There is an arc to it, but I didn’t really set out with the intention of writing a historical cycle. I came across lots of these stories while reporting and writing features for the Courier-Journal, and finding ways to tell these stories became a kind of mission for me.”

And the story of Louis Coleman, says Muhammad, held a special kind of urgency. “I kind of got to know him through reporting,” the playwright recalls. “And we had even talked about the possibility that I might write a biography, but I couldn’t really do it at the time because there was always the possibility I might be assigned to report on him.”

But after he retired from the paper, Muhammad knew that writing about Coleman had to be a priority for him — not simply because of Coleman’s prominence, but because of Muhammad’s own ambivalence about Coleman raised questions that his journalistic imagination needed to pursue.

“When I was covering him,” said Muhammad, “I kind of saw him as ridiculous. He was like a one-man army that I thought was ineffectual a lot of times. A lot of times he would go off half-cocked, not really understand the situation he was in, and he’d end up defending people — like a white worker who seemed to be a victim of reverse discrimination but was actually committing sexual harassment. It seemed like he was so hung up on being a leader that he sometimes embarrassed himself and his cause.”

But after retiring from the paper, Muhammad delved into the subject. He read every published story in the Courier-Journal archive, some 1,200 pieces, he recalls; and he interviewed a couple of dozen people who had been close to and worked with Coleman — family members, fellow activists, religious leaders. “I came across all kinds of funny, crazy, inspiring stories. And I started to see Coleman  in a different light,” said Muhammad.

“What I didn’t really understand was that one of the reasons the Louisville police had a consent decree to hire more black officers was that he marched around city hall for years. He and a handful of people. The reason that the state and the EPA started addressing environmental issues in Louisville’s West End was that he and his organization, the Justice Resource Center, marched around smokestack sites in Rubbertown for 13 years. “I remember seeing a picture of him in a hardhat when they were building Papa John’s Cardinal Stadium. He was out there blocking a backhoe and there was a security guard wearing a necktie and blazer with a walkie-talkie. Coleman was out there because he didn’t think they were using enough minority contractors, and to look at that picture you’d think, this guy is not going to get anywhere, but he did. And those protests completely changed the way business is conducted in Louisville.”

Muhammad continued, “But Coleman wasn’t just focused on the idea that ‘the white man is wrong.’ He’d sit down at a corner and buy back guns. He would march through neighborhoods with banners with addresses of all the crack houses. He had a habit on Sundays after services of going to a crack house that was in sight of the church. He would go there with his bullhorn and preach while people threw rocks and stuff at him. Then he’d go back to the church, have dinner and go home. And there’s a great story — it’s in the play — about an episode where the leader of the crack house finally invited Coleman in to talk.”

The Coleman story was compelling, says Muhammad. And as he worked on it, he realized it was a story that needed music — a challenge of a different sort. And so he started writing lyrics, seeking out gospel tunes and spirituals, soliciting advice (and arrangements) from area musicians (including folks like Harry Pickens, Todd Hildreth, the play’s director, William P. Bradford III and Music Director Gayle King), and eventually realized something. “Believe it or not,” says Muhammad, “I found a kind of template in ‘Man of La Mancha.’ I realized that Louis Coleman was just like Don Quixote. He’s like a bumbling idiot who turns out to be wiser and more courageous and more hopeful and open hearted than the people around him, the people who didn’t really see him.” •