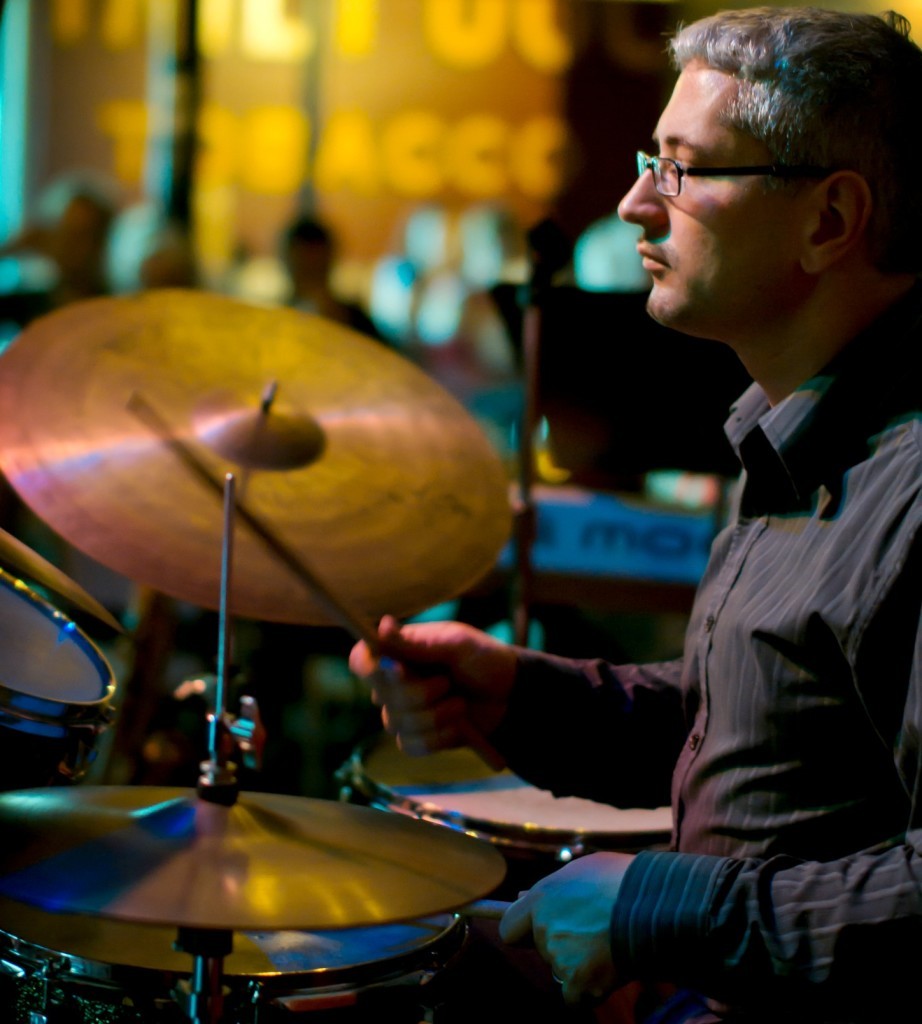 When Louisville jazz drummer and composer Bobby Falk booked Kevin Ratterman’s La La Land Studio to record his third album, the forthcoming “A New Day,” Falk allowed LEO to observe the process. While the atmosphere was relaxed, Falk was able to combine discipline with clear planning and respect for his fellow musicians, all the while maintaining an openness to the moving spirit of improvisation which underlies jazz. First, though, for those who may not be familiar with him, he’s the son of Louisvillian Gary Falk, who himself is an accomplished saxophonist, audio engineer and historian. Bobby Falk’s first album, “Turning the Tables,” came out in 2006. His second, 2013’s “Samuel Street Songs” (named for his longtime Germantown residence), continued the template of his first, with both original material and some well-chosen covers. “A New Day” marks departures from the earlier albums, this time using all original compositions and a different studio (Falk joked that this time he didn’t get the family discount).

Over the course of the two days of recording, there were personnel changes, meant to present the styles of several of Falk’s old friends and colleagues. Craig Tweddell and Rick Cook switched off between songs for the trumpet and flugelhorn parts, while Wade Honey and Daniel McGeeney alternated on keyboards. Lee Puckett played electric bass; Saulo DeAlmeida took over on acoustic for several tracks. Tommy Poole and Hunt Butler played reeds on different songs, leaving only guitarist John Arstingstall and Falk himself as the single players on their respective instruments. Additionally, the ensemble size changed from piece to piece, from a delicate duet between Butler (on flute) and McGeeney on “Back Home” (that’s right, the leader sat out for his own piece), to quartet for the Pat Metheny-esque “Journey,” which was actually made into a quintet with Falk overdubbing drums after playing vibes live with the other musicians. As Falk later told LEO, “I wanted to feature everyone in the Bobby Falk rotation pretty much. I was hearing in my head, Daniel on certain tunes and Wade on certain tunes; same with the two sets of horn players also, both guys bring different styles and sounds to the table.” Falk leaves for Dallas at the end of summer, and he added, “This was sort of documenting this last chapter in Louisville for me, musically.”

Most of the musicians had played with Falk the Friday before the recording began at a Louisville Jazz Society-sponsored concert at the Monkey Wrench. Their familiarity with the music, as well as their devotion to the project, kept the project moving forward, even when there were several takes of some songs. For example, only Falk complained, tongue-in-cheek, about numerous recordings of “Sundown Dance,” saying, after the third version, that “I don’t think I can do four — my hands will fall off.” He actually recorded three more takes the following day.

For those who have not been to a studio recording session, there can be a slight air of surrealism. In the area outside the sound-proofed performance space, with a large array of analog and digital equipment, the music sounds natural as the players perform. Sitting inside with the musicians was another story. The keyboards, electric bass and guitar were all played directly into the recording equipment, so that only the acoustic instruments could be heard without headphones. Thus, on “That Sunday Feeling,” the “churchified” organ was absent, leaving only drums and saxophone audible within the confines of the performance room.

Engineer Kevin Ratterman’s studio was a welcoming environment, as people walked in through an open kitchen and dining area into the space which held an array of analog and digital recording equipment. Ratterman himself, a veteran of recordings ranging from My Morning Jacket to the Preservation Hall Jazz Band, said little throughout most of the sessions, but was quick to respond to questions or make suggestions when asked.

“I’m a huge fan of jazz, and researched older recordings and how they were made,” he said. Indeed, in a seemingly random group of records nearby, a classic Louis Armstrong/Earl Hines 1920s album was front and center. Ratterman noted that a major difference in his work with rock and jazz projects was in the mixing. He explained how he had created a “blueprint mix” to use for the songs, as a guide to instrument placement and relative volume, centered around the drum sound.

For a drummer-led album, the focus was not to showcase the leader’s percussive abilities as much as to spotlight his compositions. Falk commented that he writes on piano, and “there’s no rhyme or reason — when I’m inspired, I hear a melody in my head. I might write five or six pieces in a row, then none for months. It’s mostly about a strong melody — something that sticks, something you can hum. Rhythmically, you can make it what you want.” Having gone from the in-the-moment concert setting to the studio sessions in the following days, Falk noted “As far as keeping the music fresh in the studio, it is a challenge in that situation. We try our best to use our ears, and rely on our natural instincts and do what we do best — create music!” Indeed, they did, and the proof will be forthcoming when Falk releases “A New Day,” set for late this summer.