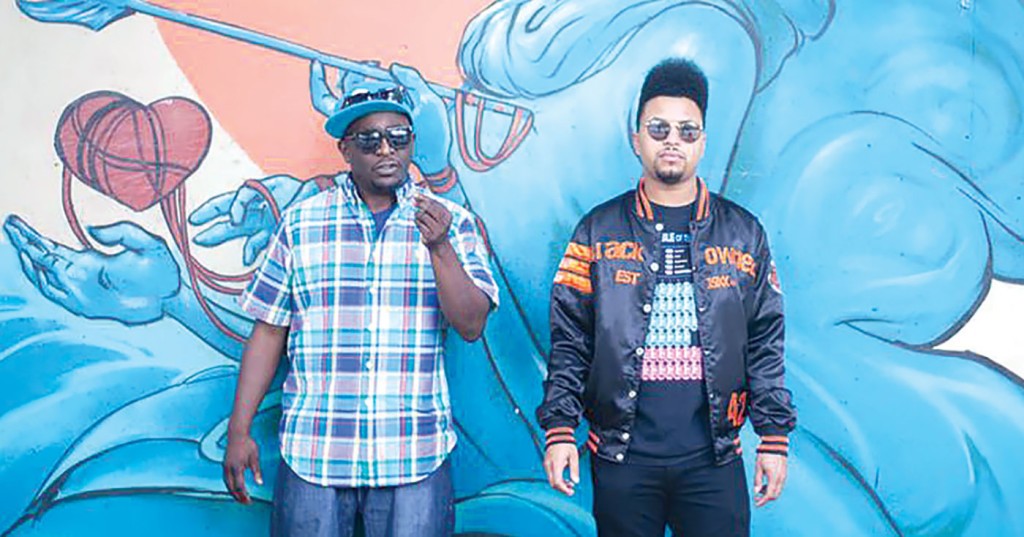 Composed of Donte the Gr8 and Buggs The Rocka, Space Invadaz combines some of Cincinnati’s finest emcees into one dope unit, on tour now with longtime friend and sometimes collaborator Talib Kweli. You can catch them this Friday opening for Kweli at the official Forecastle After Party at the Mercury Ballroom.

LEO: How did the group form?
Buggs Tha Rocka: Honestly, I knew of Donte because of his group Mood — they were the biggest hip-hop group in Cincinnati. That’s where I also got hip to Talib Kweli and of course, Hi-Tek, so I was always a fan. Fast forward to 2012: we met at The University of Cincinnati. We both were on this hip-hop panel speaking to the youth. He knew of me from doing my thing, building a huge buzz up in the city and nationally, and he said he dug my music. I was one of the few younger cats out keeping that golden-era hip-hop sound they created alive, and we just organically grew a bond and things kinda just fell in place and now the Space Invadaz are here.

LEO: I understand you all have been involved in hip-hop for years now. What keeps you motivated to get out there and bring it?
Donte The Gr8: Hip-hop has been an internal part of both of our lives for many years. Our drive and passion comes from the music itself. Music is therapy, healing, spiritual and pure energy. There is no motivation needed. The music is the motivation. Our fans that love what we do are the motivation. Making Space Invadaz and Ohio synonymous with hip-hop is the only motivation we need.

LEO: Who does what in the group? Do you all split the lyrical details as well as the beats, or does everyone do their own thing and then come together? Is your writing collaborative or does everyone add their own flavor?
BTR: We both write the music and choose the beats. We usually take turns on choosing the music and let Hi-Tek kind of bring our visions to life in the last process of completing the song sonically.

LEO: What’s the Cincinnati hip-hop scene like?
BTR: Honestly, we are the scene in Cincinnati. Our crew helped cultivate what it has become now — just a bunch of kids with big-city dreams hungry for a chance to display their talent with various styles. It’s a musical gumbo here. Being from the Midwest, we pull influence from everywhere.

LEO: How has the tour gone with Talib Kweli?
DTG8: The tour is going great. We have been getting incredible responses from the fans. Middle America has been invaded by the Space Invadaz. We love all of our fans and they reciprocate. I have been knowing Kweli for almost two decades. We met in the mid-’90s when we — Mood — were going back and forth to New York, shopping our demos to get a record deal. In 1996, Mood signed with T.V.T. Recordings. DJ Hi-Tek and Talib Kweli were both featured on our album, “Doom.” Hi-Tek produced half of the album. Kweli was featured on five or six songs. That was the very beginning of our careers and theirs. We have been friends and family ever since.