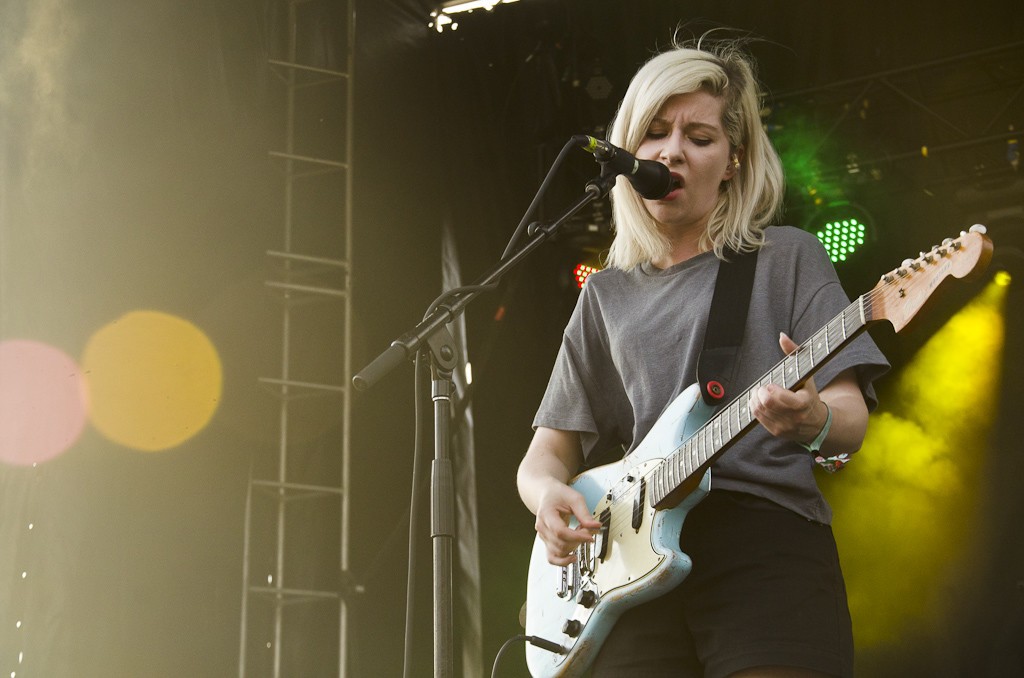 This was a thing I did on Twitter. I’d creepshot a festival goer wearing a fedora and tweet it out with that pun-y hashtag. Fedoras provide good joke fodder due to their popularity and the general population’s inability to figure out how to wear one. Are you sporting a vintage three-piece suit with full-length trench coat for your co-worker’s Mad Men theme party? Fedora might be OK (operative word ‘might’). Are you sporting cargo shorts, Birks, and that sweet parody tee from Target reading “I See Dumb People” at the Forecastle Festival? Rethink your headgear.

But then a funny thing happened on the way to the forum tent, powered by Fiat. Here I am, wearing a bandana tied to my forehead, recently dipped in ice water to keep cool for a $5 donation to the Forecastle Foundation (a pro tip from head of PR Holly McKnight and worth every penny), sporting an ironic Michael Bolton shirt for no other reason than the lulz… and my ridiculous lookin’ ass is critiquing what people wear to a music festival? Where we all subject ourselves to oppressive heat, price-gouged beer and veritable Sophie’s Choices over competing acts with similar stage times for logic-defying reasons? People dress ridiculous here because the music festival in the abstract and in practice is unrelentingly ridiculous. It’s a stark escape from reality, which nets both the positive and the negative effects of untethering from the tangible world for a weekend.

And yet, anymore, festivals seem to provide our preferred medium for consuming music, art and culture.

Festivals are to concerts as Spotify is to the album. You can debate the merits or follies of this trend, but it makes economic sense for the less-than-devoted. Festivals allow us to dabble and sample without committing, much like Spotify. Why buy a $50 ticket for a three act amphitheater show when an additional Benjamin gets you 80+ acts over a weekend? Why invest $15 in a single album when a $10 monthly subscription gives you access to a massive streaming library? I don’t find the Tinderization of music necessary defiling of the art (though some do) insofar as a fascinating shift in tide that the music industry proper has yet to properly navigate (the flubs of Apple Music and Tidal offering recent textbook examples). The ridiculousness of festivals … well, it’s OK!

And like the streaming services, festivals are expanding like freakin’ Pi. Taking cues from jam band culture and Woodstock, the early aughts saw the rise of arguably the nation’s two flagship music events — Coachella to the west and Bonnaroo to the east. Lollapalooza, anchored in Chicago as a reinvented revival of the early ’90s touring extravaganza, followed suit a couple years later. Enter both mini and massive festivals in all the markets in between. South By Clusterfuck began to live up to its name. Within a day’s drive of the LEO Weekly office lies Pitchfork, Midpoint, Bunbury, Pitstop, Shaky Knees, Moogfest, ROMP, Big Ears and others, both eclectic and niche. Louisville itself has a handful. Louder Than Life, gunning for the Affliction-apparel crowd over Forecastle’s tote-bag havers, launched last year, as did Lexington’s hippie and jamgrass-centric Moontower. NiFi came out guns blazing this year with a new festival at Kentucky Speedway (probably because someone owed a favor), boasting the likes of Green Day, Kings of Leon, Miranda Lambert and, weirdly enough, The New Pornographers and Preservation Hall Jazz Band were thrown in for good measure too. That flame fizzled as quickly as it sparked, chalked up to poor ticket sales. While it seems they didn’t give it much of a chance, perhaps they felt the disturbance in The Force that I, and others, have felt … the festival bubble will burst.

Hold up though … let’s dial back a bit to Forecastle itself, because its story is much more interesting than any of the others. The Forecastle Festival kicked off the same year as Bonnaroo, just a couple years after Coachella. Unlike those ventures, Forecastle wasn’t launched by an entertainment or media firm, flanked by sponsorship. It was a dude known as The Captain and his friends in Tyler Park. Fast forward almost a decade later and AC Entertainment, who interestingly owns and operates Bonnaroo and some of those aforementioned, now co-produces Forecastle with attendance numbers that place Forecastle on the varsity team of national destination festivals, and yes, the sponsorships that come with that.

Forecastle’s slower, more organic growth and the vision placed forth by its organizers though yielded a decidedly different festival. Despite what all the old-scene punks in Louisville with a studded chip on their shoulder might sound off on over Facebook — doling out takes so hot that I feel like I’m falling into a fugue state in a Turkish bath — Forecastle has still maintained a remarkably strong local focus for a weekend of its stature, much more than any other festival of similar size — from the locally-focused Kentucky Landing attraction, to the Bourbon Lodge (our state’s favorite export), to the local craft beers on draft and, of course, the presence of Kentucky music. Sure, undoubtedly many of these businesses are paying a premium to get here, and shades of clique-ism exist with the local music curation, but if we’re comparing amongst the peers, Forecastle remains a categorically Louisville festival.

But being on the varsity team, Forecastle has to play ball. In a most appropriate demonstrative move, Forecastle had even borrowed bike rickshaws from SXSW. And the 2015 festival landscape has produced some strange brew amongst the headlining sect in the summer festival complex. Coachella offered up AC/DC. Bonnaroo gave us, Lord have mercy, Billy Joel. Either someone in Knoxville lost a bet, or some particularly funky weed found its way onto the farm. Despite the ballyhoo and naysaying when Forecastle announced their lineup in late winter, that a festival steeped in music somewhere between NPR’s heavy rotation and Pitchfork fodder would book Sam Smith to headline Friday night ultimately shouldn’t be all too surprising. Pitchfork won’t buy Sam Smith, and Forecastle’s broad and sweeping appeal can’t, say, bill an esoteric act like Silver Jews as a headliner either. They tread a line and tread it reasonably well. Besides, unlike last year, Forecastle can’t offer up reunited Outkast, The Replacements and Slint, amongst proven festival fare like Jack White, Beck, and others every year, right?

And perhaps that’s part of the anomaly of this year’s festival circuits. Since the festival logic is wholly separate from the real world, the lineups don’t resemble the health or trends of touring artistry. The easiest test of that theory is a cursory review of the modern festival poster and scrutinizing the type sizes herein. Look at those exciting, classic and/or cool acts dwarfed by some EDM asshole that you’ve never heard of because, while not necessarily all over radio or print, festival circuit royalty doesn’t always translate outside fests. To wit, that’s why you’ve got your surefire, go-to grab bag summer fest artists and why The Flaming Lips don’t have to release an album very often to play to a crowd. Rounding out your roster, pick up a jam band or two, and don’t forget special reunions. In the event a reunion isn’t possible, roll with a hologram. Voila! This has been the festival formula for a number of years. Perhaps it was stale and the time for change was nigh. And thus, a suit in an ivory tower above Hollywood and Vine hit shuffle on his iPod playlist and decreed, “Yes, AC/DC and Billy Joel. Extremely good shit, this. The millennials’ irony circle has come full circle into sincerity, so let us move forward with this direction.”

Yet, no matter what, we love these fests. We do ’em because, no matter what, we like being seen and we want to be part of the scene. Much more so than typical concerts, festivals offer a community. We’re all sweating this thing out together, and in the spirit of rock and roll! But unlike the basement punk community, festivals pack that blockbuster punch — artists you may not see otherwise, in tandem with all sorts of goofy, Instagrammable shit marketed by corporations and products in the hope that our hotly-contested demographic will engage with the brand. This year at Forecastle, HTC wanted to take you on a virtual reality tour, which I declined because I remember the movie The Lawnmower Man (ya know, the movie that’s Flowers for Algernon but with computers). Heineken hired an artist to paint your digital portrait and Kentucky’s Obamacare marketplace provided a free photo booth and sunscreen station (securing their status as MVP among the weekend vendors). Mix that with the giant Twelve Tribes cult bus outside festival grounds, rounding up potential disciples on bad trips to join their vision quest, and you’ve got the formula for a carnival that resonates with revelers, adults, nomads, yuppies and account managers needing to blow off some steam.

Despite the discomfort, over-saturation and the occasional lineup that requires a bit of mental acrobatics to parse out, festivals spark a bit of magic, and certainly establish a fleeting, rare feeling of a true event. Unlike other festivals though, Forecastle sparks this feeling with also a sense of place. The backlit skyline at dusk. The glimmering Ohio River backdropping each stage. Squallis Puppetters’ super tall roving Hunter S. Thompson facsimile. Bicycling for Louisville’s awesome and packed bike valets. Our favorite food trucks. Bourbons. Coachella is simply in the desert, and Bonnaroo on a rural farm. Forecastle is in Louisville — aesthetically and intrinsically. But as a national stage deserving of our city and the visitors to our home, it will inevitably also gather up the runoff of festival culture good and bad. That aforementioned spark — the good. My next target over the fedora — white people in headdresses, conical hats, and other apparel you just cannot wear unless you’re awful… well, that’s the bad. A festival weekend can only detach from reality so far.