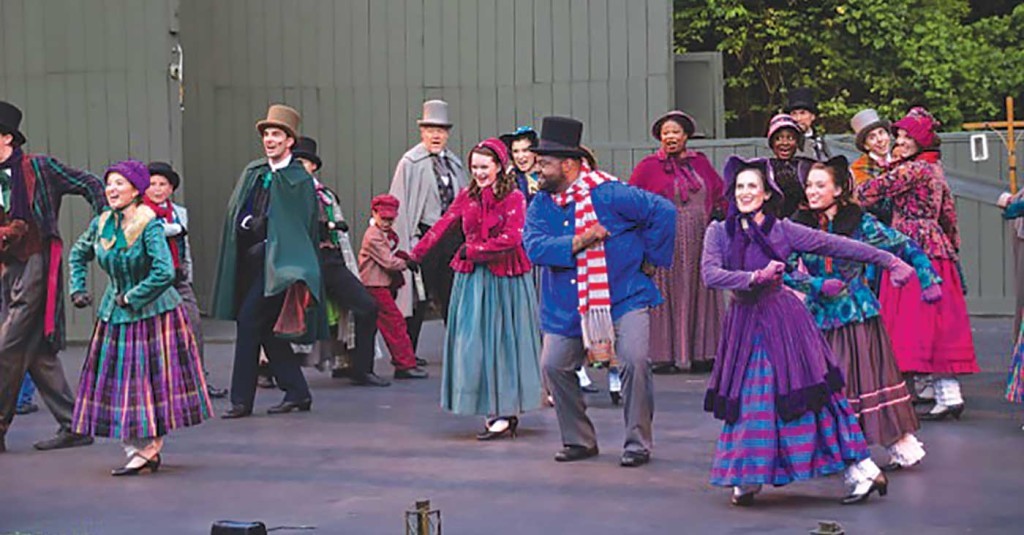 One of the risks of seeing “The Stephen Foster Story” is the possibility that you might contract a serious case of costume envy. The play — with a script by Pulitzer Prize-winning dramatist Paul Green — has been a mainstay of American summer theater since 1959. And for 51 summers the costumes have been designed by Si Arnold and a crew of seamstresses (this year’s credits name Sherry Barnard, Canda Beam, Helen Goff, Pat Guitteres, Tina Todd and Wilma Watson) who hand-fashion period-perfect outfits from carefully selected fabrics designed to capture the flavor of the antebellum South.

Every detail of every costume — elegant frock coats, tight-waisted outfits with enormous hoop skirts and even never-seen undergarments — is crafted and fitted by hand as new cast members, recruited from around the country, rotate in year by year. And though the women’s costumes may be the most colorful, it’s the fantastic men’s hats — in myriad shapes and colors — that make me long for the good old days. .

Anyway, the result is an extraordinary visual spectacle. The big production numbers find upwards of 50 actors dancing and singing in a swirl in a rainbow of colors – in a splendid natural amphitheater surrounded by a grand canopy of trees.

Years ago — and maybe still, in some circles — the outdoor summer theater circuit was called “The Straw Hat Trail.”  It’s still an important part of the fabric of American theater, a circuit where the repertoire celebrates regional history and personalities in colorful musical pageantry.

I’ve seen quite a few of these over the years, and I daresay “The Stephen Foster Story” is one of the best examples you could hope to find.

First, there’s the music itself. The score includes more than two dozen songs from the pen of Stephen Foster — and this year’s cast, coached by Music Director Michael Bolden, executes the songs with a superb, clear sound that brings full-throated authenticity to celebratory tunes like “Camptown Races,” elegiac tenderness to “Gentle Annie” (splendidly sung here by Annie Bolden in the role of Aunt Charity). There are raucous novelty tunes like “Shanghai Chicken,” a sprightly tavern number that culminates with feisty Gussie Jordan (Trish Epperson in a delicious role as a rival for Stephen’s affections) dancing on a table top. And of course there is the sweet, romantic urgency of love songs like  “Jeanie With the Light Brown Hair,” in a rich, evocative performance by Mickey Rafalski in the title role and the duet, “Beautiful Dreamer,” that finds him at last together with his beloved Jane (“Jeanie”) McDowell, played by the silver-voiced Charlotte Campbell.

But the core of the play is Paul Green’s book. In the light-hearted context of the outdoors, Director Johnny Warren told me that although the play’s musical numbers get tweaked from time to time, Green’s script remains intact. And Green, a North Carolina native — he also wrote the outdoor drama “The Lost Colony,” about the lost Roanoke colony, which has been playing continuously since 1937 — had a career-long interest in race relations in the South. The play that earned him the 1927 Pulitzer, “Abraham’s Bosom,” was a rare work that used an interracial cast and featured a bi-racial protagonist. In 1937, he wrote a play called “Hymn to the Rising Sun,” which depicted a Southern chain gang under the brutal domination of a racist white guard (New York Times critic Brooks Atkinson called it “a beautifully written case history in penal brutality” and “a stunning play.” And 1941, Green partnered with Richard Wright to pen a Broadway dramatization of Wright’s seminal novel “Native Son.”

And in Foster, it seems that Green found a sympathetic figure from the past. Almost every Kentuckian knows that the original text of Foster’s “My Old Kentucky Home” uses the word “darkie” to refer to enslaved black servants. And at least some listeners, I think, infer that because Foster used the word he, himself must have been a racist. But in fact, Foster was inspired by Harriet Beecher Stowe’s “Uncle Tom’s Cabin,” and notwithstanding the lyric (which was officially revised by the Kentucky legislature in 1989 to replace the word “darkie” with “people”) is a lament sung by a slave who has been sold down the river. And no less an abolitionist than Frederick Douglass credited the song with helping to shift white opinions about slavery.

And throughout the play we see Foster through a gently progressive lens: The script is a fast-paced love story set against a backdrop of class and race. Foster is a creative, absent-minded sort of person who is ill-suited to a life of business. The folks who know him, like his music (well, some of them do, anyway — others view his plantation songs as beneath their dignity), but the idea of making a career in what was then the non-existent profession of  “songwriter” seems impossible. And his unreliability promises to thwart his relationship with Jane (“Jeanie”). On a business trip to Bardstown, Foster confirms his reputation for incompetence by botching a tobacco deal — but here he also gets a first-hand glimpse of slavery’s cruelty when the sale of a slave down the river breaks a family’s heart.

The facts of Foster’s actual experience in the South are murky, and the play is a fast and loose fictionalization of the details of his life, including his vexed relationship with the leading minstrel performer of the day, A. P. Christie, and with other publishers who stole his songs during an era when copyright was impossible to enforce. But under Johnny Warren’s direction, it’s a sure-footed production full of fast-paced verbal and physical wit, a sweet romance, and, at its core, a message that must have seemed especially provocative in 1959 and is still relevant today.