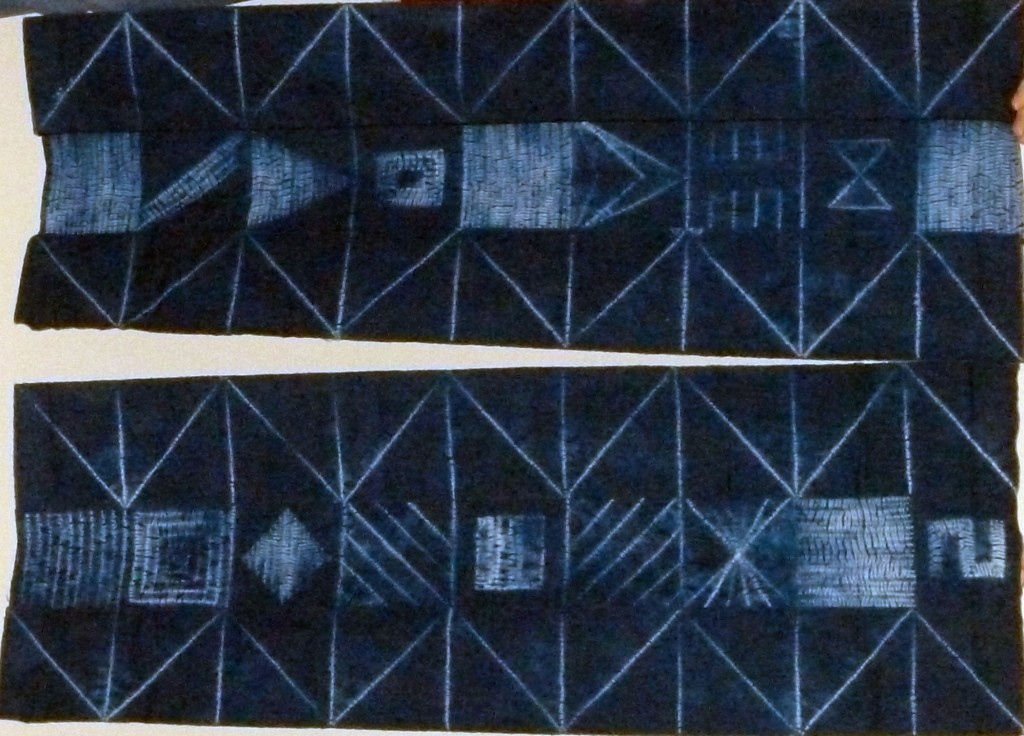 [The above image is “Untitled” by Lucille Allen.]

Elmer Lucille Allen, aka Lucille, is a local treasure. Yes, she’s an artist, but that’s a faction of her accomplishments, as her recent selection as a West Louisville Connector attests.

LEO: Your first degree was in chemistry. How do you use your background in science when creating your ceramics and textiles?

Lucille Allen: My background in chemistry has helped immensely in the field of art. I earned a Masters of Art in Studio Arts in 2002 with a focus on ceramics and fibers. Even though I had a degree in chemistry, I was unaware of its importance in ceramics until I took my first ceramics class at the University of Louisville from Tom Marsh in 1981. I learned that clay and glazes are made from the same materials but in different proportions. I love teapots but I have yet to make the perfect teapot. During the first half of 2015, I have been experimenting with slips on slab built plates/platters. When I became a graduate student, I was told that I had to take a second studio class. I chose fiber. Even though I had been sewing since I was 12 or 13 years of age, I was not aware of the many areas that were in the fiber field. Every technique in fiber or ceramics requires a reagent or multiple reagents that are made up of chemicals. There is a material safety data sheet for each reagent. Everything that is made contains some type of chemical. I purchased fabric not realizing that it started out as a concept and finally ended it as a final product. A plain piece of fabric to a fiber artist is like a canvas to a painter. My fabric of choice is silk noil. The majority of my shibori wall hangings are immersion dyed using Dharma Cobalt Blue. This produces a vivid design that comes to life after the stitches are removed.

LEO: You are also wearing another hat as the director of the Wayside Expressions Gallery. How do you go about finding artists and curating exhibitions?

LA: [I] was asked by Charles Crawford in early 2005 to attend an art meeting that was addressing the issue of opening the art gallery at the Wayside Christian Mission. The project was proposed by a U of L Kent School of Social Work student as a way to introduce art to the clients and to the community. [I] don’t know how it happened but [I] became the volunteer curator/director working with Rev. Bart Smith. [I] decided that there would be monthly exhibitions with an artist or a group of artists. In 2009, the property at 800 E. Market St. was purchased and the last exhibition there was February 2010. The gallery that is now located in Hotel Louisville has many advantages. Art is seen by the public on a regular basis. This gallery space is used for meetings, weddings, church services, etc. Most of the artists come to Wayside Expression Gallery because there are few places that will exhibit art. Others contact me after they have viewed an exhibition. I exhibit art by artists who have never shown before if I think that their art is worth the public viewing. There are guidelines that must be followed as this is a Christian facility.

LEO: Explain why you don’t take commissions for new work.

LA: I do not take commissions because I only make work that inspires me. I prefer to make art to exhibit so that many can view it. And my hand-stitched fiber and slab built ceramic pieces take a long time from concept to completion. One hand-stitched shibori piece that is almost seven feet tall took almost a year from the inception to its completion.

LEO: Since we’re talking about art, what is the thing you are most proud that you have done? And since you are much more than an artist, what is your proudest achievement in the Louisville Metro community?

LA: My ceramics and fiber art hangs in the home of known artists, such as Ed Hamilton, Denise Furnish, C J Pressma, Laura Ross, etc. A fiber art piece hangs in the lobby of Spalding University, my alma mater. And I am most proud to be a ceramic and fiber artist. In Louisville Metro, I have been recognized for my contributions in the West End. It makes me proud when I see Rev. Kevin Cosby who I first met as a boy and who played baseball for me in the Chickasaw Little League. I was grooming young boys in the late ‘60s to be responsible men who were coached by citizens from the community.

LEO: While I know you think you’re an open book, what is something people do not know about you?

LA: I learned how to write basic language code for a U of L computer class in 1962. And the following semester, I took a Fortran class from a Speed Scientific School professor. People often ask, do you have a computer and I can truly say “Yes” and I use them daily. I have an I-Mac, a Mac Book, an I-Pad and an Apple I-Phone 6.  And I will be 84 years old in August.