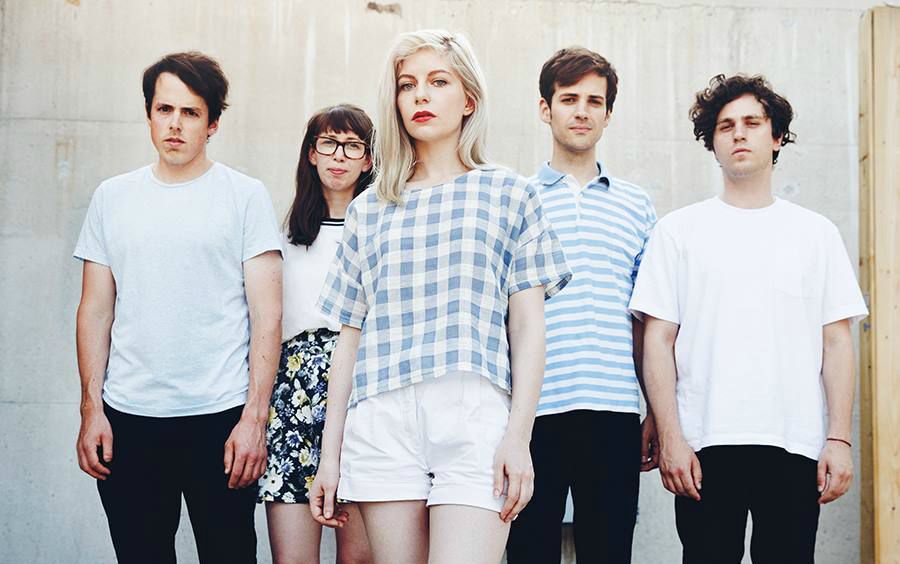 Canadian Indie Poppers Alvvays have an easy air about them. Formed in 2012, the band has developed a following, punctuated by the release of their 2014 eponymous, critically-acclaimed album. You can catch them playing an early set on Friday from 1:45 to 2:30.

LEO: How did Alvvays start? Was it your first band, or did you have previous experience?

Alec O’Hanley: Molly toured with her family a little bit. I was in some Prince Edward Island pop bands. We were still nameless while recording our album. We moved from our respective maritime outposts to Toronto and gave the band thing the old college try.

LEO: How has the band evolved since its inception? How do you juggle various personalities while working for one cohesive whole? How does Alvvays maintain a unified front?

Alec O’Hanley: The five of us are pretty tight, no major dysfunction. We come from a fairly humble part of the world and are mostly egoless. I mean we’re not Kraftwerk or the Hives but we do value cohesion, sonically and otherwise.

LEO: What are the stresses of touring and how do you attend to that? What is your day-to-day like when you’re out on the road? Do you ever get to see the world, or is it all work?

Alec O’Hanley: Having a healthy mix of genders can work wonders for band sanity. Dude bands can devolve into a locker room chirpfest pretty quickly. We play nerdy card games, we garden-stroll and lake-jump whenever possible.

LEO: How is the festival circuit? Do you approach a festival show any different than you might a smaller, more intimate show?

Alec O’Hanley: Summer one-offs are still novel for us. There is an in-and-out factory quality to certain festivals that can ratchet adrenaline levels up a notch or two for better or worse but it’s nice meeting and watching peers you revere, you know, whether it’s shooting the shit with Ariel Pink or eating yams with Kendrick Lamar.

LEO: What’s the Canadian music scene like and how did that shape Alvvays, if at all?

Alec O’Hanley: Neil Young still towers over everything. Joni too. Celtic music was big. Molly’s family was the de facto childhood summer soundtrack for most maritimers. Geezer friendly but kids dug it too. We revered Sloan as kids too. The girls were big worshippers of the Alanis/Celine/Shania holy trinity. The boys did the same, but wouldn’t admit it.

LEO: What was the first type of instrument you played?

Alec O’Hanley: Molly jokes she was born in a fiddle case under a bridge. I wanted to play piano ever since I heard my best friend play Happy Birthday.

LEO: How do you prepare for a performance, be that a live show or recording?

Alec O’Hanley: We’re pretty routine-less. We might play a game of Asshole or something.

LEO: What constitutes a great show and why?

Alec O’Hanley: I like seeing spontaneity, like when someone breaks a string. I want that parasympathetic nervous tingle, that energy transfer. As long as they’re not just dialing it in and the songs are there I’m in.