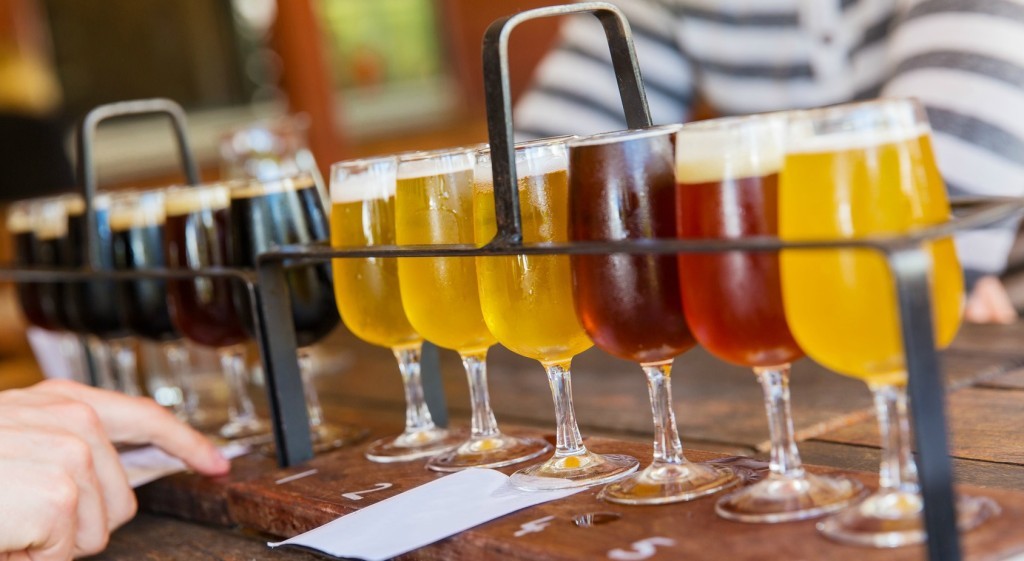 We all experience summer brews in our own way, be that with a nice crisp lager, a citrusy Hefeweizen or a floral IPA. What better place to enjoy that than one of the many awesome breweries in Louisville, which offers a wide array of beers, both of the summer variety and beyond? The only prudent solution here, of course, is to try them all and give a full report. I was brave enough to do that for you, and am happy to share my findings.

Vidal Saison from Against the Grain
Since opening, Against the Grain has taken a very progressive approach to brewing, making a host of seasonal beers, rather than a stable of regulars. This isn’t to say that they don’t have any consistency to their product, but rather that they take a lot of risks with what they do and it shows in their brews for the better. Of their current lot, the Vidal Saison, a farmhouse-style saison ale brewed with a little grape juice and spicy pepper is perhaps the most inviting on a warm summer day, especially with the crack of the baseball bat in the distance. The Vidal Saison isn’t heavy at all, but has plenty of floral, almost IPA hints of flavor, cut admirably by a sublime fruit taste that never overwhelms.

Watermelon Crack from Apocalypse
The Watermelon Crack Ale is as the name reports, a light, fruit-flavored beer. Some people may be overwhelmed by just how bold the watermelon is in the beer, but rest assured that there are a number of alternative options at Apocalypse, like their Cream Ale or their seasonal Hefeweizen, which has a light wheat flavor. The Watermelon Crack Ale is incredibly easy to drink and doesn’t have an especially high ABV, which makes this a reasonable session beer. There is a light pinkish color to the beer, and a taste that is kind of like cereal, but not quite so sugary.

Summer Wheat from Bluegrass Brewing Company
There really aren’t a ton of options at the BBC to begin with. There are about six or seven standard brews on tap that don’t seem to rotate in or out with much regularity, although there are a few seasonal beers that pop up from time to time. Their summer rotation includes the Summer Wheat, which is easy to drink, if not overwhelming in its flavor profile. This is a great beer, light in color and perfect with an orange thrown in for good measure. It has that kind of pop that only a wheat beer has, where it’s right on the border of bitter, but not quite there.

The Louisville Lager from Goodwood Brewery
Is there anything better than a lager on a hot and humid afternoon? Maybe for some, but for a lot of folks, it’s hard to beat. There’s something so simple about a solidly crafted lager, and the folks at Goodwood have it down. A former BBC satellite, the Goodwood Brewery focuses on making a great, rather than exotic, brew, and they shine brightest with the Louisville Lager, which is perhaps one of the most thirst-satisfying beers on the local market at the time, perfect to stave off the heat.

Apricot Wheat from Great Flood
Like Against the Grain, Great Flood has a series of rotating taps that have only improved in content since the brewers opened their door two years ago. At the time of my tasting, they had two wheat beers, several IPAs, a porter and a Belgium style ale on tap, all of which were a pleasure to drink. The toughest call perhaps, came down between the Belgium and the Apricot Wheat, with the dark malted sweetness of the Belgium just barely falling under the delightful zing of the Apricot Wheat, an ideal beer for patio drinking. The Apricot Wheat is, as promised, offering a taste that is as you imagine, albeit in very subtle ways, with a lighter, almost orange body, and low IBU.

Tafel Bier from The New Albanian
The New Albanian brewery largely specializes in darker beers as manifested most commonly by their Community Dark beers or rotating IPA taps, which makes the Tafel a bit of an outlier on their menu. There is more than a little hint of banana flavoring in the beer, which has a lighter body that, while not as clear as a lager, is similar in coloring. The ABV on the beer didn’t seem to be overwhelming upon consumption, and the IBU is definitely on the lower end of the spectrum.