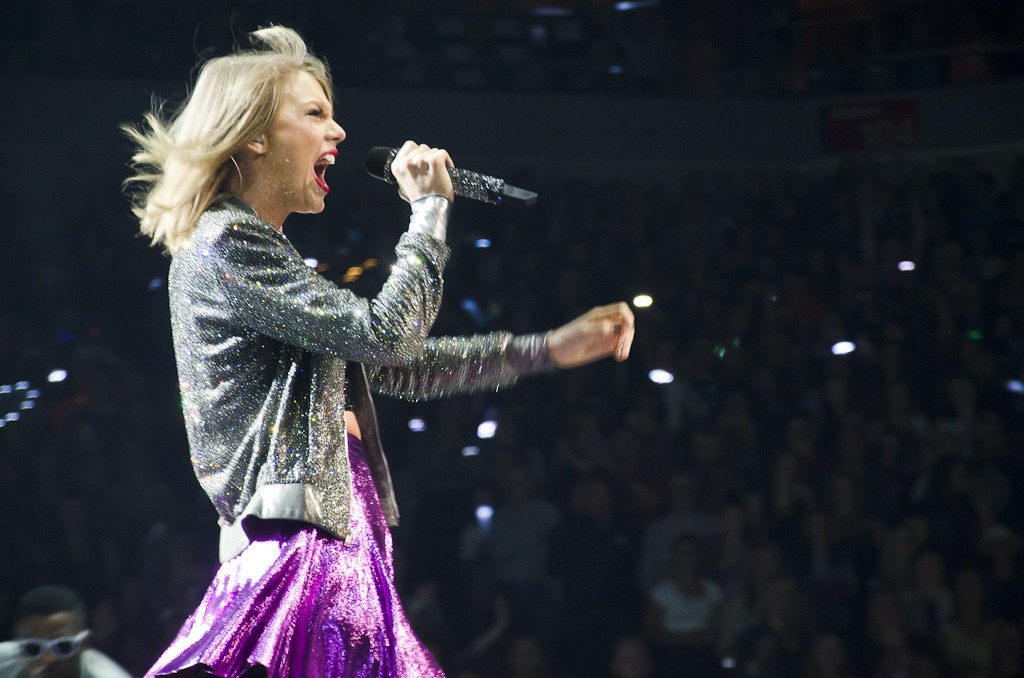 Michael: Not since news of the new FC league, or maybe the #LouisvillePurge, has Kentuckiana seen such a wide-reaching shared excitement as Taylor Swift returning to the Yum! Center. Teenagers wanted to be there, along with their parents. My tattooed late 20s/30-something friends wanted to be there. The ghost of Hunter S. Thompson was probably somewhere too, bemoaning with great eloquence the price of a highball at this godforsaken place. And that speaks volumes of T Swift. Her easily-relatable, instantly-hummable saccharine pop is earnest enough for those who like their anthems sincere, yet self-aware enough (a la, say, the “Blank Space” video) for the cynical sect. Truth be told, the reverberated production isn’t too far removed from Purity Ring or Cold Cave, if we’re being honest with ourselves. Lest any of the self-referential haters deny, she just brought out the big guns with Kendrick Lamar, who perpetually bats .300, to lock in her authenticity capital for the new version of “Bad Blood.” And what other artist has about-faced as, ahem, swiftly as she has since… Radiohead? If “Fearless” is her “The Bends,” then the synth-heavy and pretty killer “1989” must be her “Kid A” (hopefully Taytay’s follow-up won’t be a “Hail to the Thief” turd in the punch bowl). [NOTE: All pimpled-faced, vaped-out nerds butthurt that I compared Taylor Swift to Radiohead may direct hate mail to [email protected].]

Laura: The first time Taylor Swift played a concert in Louisville, I remember seeing the throngs of tween and teen girls clad in cowgirl boots and denim skirts descend on the city. But this is “1989,” not 2008, and as Taylor says in the preconcert video, this album, this tour, has been a “rebirth.” Welcome to Taylorverse 2.0. Once upon a time this place was a small town just out of reach of Nashville, but Taylorverse Volume 1 isn’t even a speck in Taylor’s rearview mirror anymore. This Taylorverse is a 1989 Manhattan, where everyone dresses just like Taylor in high-waisted skater skirts or shorts and belly shirts. I visited for the first time thanks to my 12-year-old daughter, who was so excited, she was practically vibrating.

Scott: I can see why my metalhead friends like Taylor — underneath the glowing positivity, there’s some cerebral darkness. It’s not really hidden. It’s right there in the scorching, pissed-off lyrics, running side by side with the bumble-gum twang of her early stuff and the dance-friendly synth beats of the new material. Trent Reznor should produce her next album. It would probably be incredible. Then they could tour together and during her motivational-speaking interludes about friendship, relationships and acceptance, he could recreate the beats from early-‘90s Nine Inch Nails deep cuts. I’m not trying to be an ironic jackass; I seriously think it could work. Although I’m probably being somewhat of an ironic jackass.

Michael: As for who actually showed up last night, though, it was decidedly a majority of young girls who blared a mighty high-decibel roar as Taylor approached the mic — “We may be in the wonderful city of Louisville, but our story tonight starts in New York” — kicking off the night with “1989” album opener  “Welcome to New York.” From there, Taylor and a menagerie of backup dancers and a virtually hidden, studio-slick band barreled through the electronic pop of Swift 2.0. Save for “Love Story,” she completely shed her Nashville country skin, sticking close to the “1989” script, with the occasional “Red” banger peppered in, including a cinematic, orchestral, pretty great reworking of “I Knew You Were Trouble.” Costume changes abounded, lip syncing was (refreshingly) very minimal and the choreography properly complemented her generally-charming awkwardness (whether legitimate or feigned, doesn’t matter). Her musicality is unquestionable, switching between various instruments throughout the evening and taking any numbskull rockist’s claims of pop stars lacking talent rightfully to task.

Laura: The Taylorverse is populated by Taylor’s BFFs (like you and me), some special high priestesses called Swifties, who wrap themselves in glowing lights like fairies from “Out of the Woods” and bid for spots in the “The Loft,” and a dozen or so very buff backup dancers who start out breakdancing during “Welcome to New York,” kind of like New Kids on the Block. But in no time, the shirts are off and, nope, there was no boy band like this in the ‘80s. Then, during “I Know Places,” they’re wearing these black, bedazzled helmet/hood thingies that make them look like Daft Punk with some subtle S&M undertones. And, during “All You Had to Do Was Stay,” they’re almost like a pack of Dementors swirling around the love interest who would dare spurn Taylor and whisking him off the stage. Yeah! That’ll teach you to break Taylor’s heart!

All Taylor wants, as she told us, is for things to be like “The Breakfast Club” or “Sixteen Candles” or one of her other favorite movies from the ‘80s, where two people who seem really different fall in love and drive around in a convertible. Of course, they have a fight and a breakup, but then someone shows up at 2 a.m. and stands outside your window with a boombox and you work it out, because this is the Taylorverse, where “you are not someone else’s opinion of you.”

Michael: Beyond the performance, though… well, the musical earnestness and her own image building collided head on, producing deeply weird results. If “aw shucks” asides could be converted into energy, Taylor could’ve sustainably powered the entire Yum! Center, production included. During costume and set changes, The 1989 World Tour featured interludes of video testimony with Selena Gomez, Haim, Lena Dunham, and others, splayed across massive LCD screens, ruminating on how much they love being Taylor’s friend. Between songs, Taylor regaled stories in which she referred to the audience members as her friends, particularly during her “Happiness Is Fleeting” soliloquy — undoubtedly the evening’s Death-of-a-Salesman moment. Taylor is your friend. Taylor understands. Taylor is real. Taylor feels sad sometimes, too, but it’s OK because you are invited to the slumber party and there are snacks. Taylor loves you, and she relates. And to be fair, her persona, which I don’t believe to be completely constructed, does remind me of people I know and like. But there’s a ceiling of relatability for someone who’s been a superstar since 18 — on both sides. Oh, but she’ll try! And that’s where the narrative got pushed to its breaking point and started to feel like cuddly, mimosa-fueled propaganda. Between that and the (admittedly cool) synchronized light-up bracelets strapped to the arm of every concert-goer on the way into the building, things resembled less 1989 and more 1984. Except that it felt really really nice.

Scott: This was my first pop concert at an arena. Katy Perry’s Super Bowl half time show recently helped me recover from my dumb too-cool-for-pop-music phase. I have yet to get to the level where I claim to be Taylor’s cat (see above photo), but I now accept pop music for what it is and, most importantly, I can enjoy it without being a pretentious doofus. But, from an outsider’s perspective, the first thing you notice about Swift is her image control. Her handle on what she projects and how she aims to be perceived is firm and it’s obvious that she steers the ship with an iron fist, although both public relations triumphs and tribulations are made along the way. Image control in the pop/rock terrain is obviously not a new thing: Some musicians are suspiciously good at it (Prince, for things like doing interviews and not allowing journalists to use tape recorders, basically beating the out-of-context quote before blogs and social media were even a thing), some are accidentally good at it (Bob Dylan in all his infinite mystery), some are organically bad at it (Lana Del Rey and other people who try to be honest and, on the other end of the spectrum, Jack White and other people who try too hard) and some are purposefully bad at it (see: RiFF RaFF’s Twitter handle or this dude’s song about the enjoyability of selling cocaine). But Swift is something all together different, probably because she is this strange vortex formed from a frankenstein-like creation of each aforementioned type of public personality, and, to millions of people, that somehow makes her appear to be truly relatable. But those monologues. They come with a free cup of cult Kool-Aid, although the toxin is only Disney-grade poison. She’s built a clever little facade. That being said, if I had kids and their favorite musician was Taylor Swift, that would be pretty cool. Because, I mean, I’m sure we could cook up a whole fucking buffet of hot takes, but, at the end of the day, anyone who fills another human being with as much joy as she brings to 12-year-olds is more than alright. Plus, that means my children would hate John Mayer, which is a major victory.

Laura: Taylor is, of course, the star of this ’80s movie. Her face fills the jumbotron concert screen and she stares right into the camera, right at you, and she loves you so much! She is flooded with emotion, and it’s heartbreaking. She bites her lip just a bit and takes a deep breath. She might cry, but manages to hold it together as she looks right at you and says, “I am so happy looking at all of you right now. I hope you’re happy looking at me.” Oh, yes! Yes, we are, Taylor! We are inexplicably happy right now, all our wristbands glowing pink in unison. Yes, “We are in this together!” There are really no cliques in the Taylorverse, but there are undoubtedly BFFs: Selena Gomez, Cara Delevingne, Karlie Kloss and Danielle Haim are beamed into the Taylorverse via video and it’s just like they’re here with us, laughing about all the good times everyone has at Taylor’s penthouse where BFFs hang out, play with Taylor’s cats Meredith and Olivia, eat too much Chinese food and bake together. And even Lena Dunham is here (Lena Dunham! Seriously! All remaining vestiges of guilt for how shamelessly I’m loving this concert are dispelled when I see MY friend Lena up there on the screen talking about how awesome Taylor is.) Cara says her BFFs are “the best thing ever,” and Selena says, “A group of girlfriends is the family you create.” I’m choking up a bit and simultaneously feeling a little insecure. For just a moment, I almost feel excluded from what Danielle calls “the epic squad,” but then there’s Taylor floating like an angel above the crowd reassuring us that we’re all friends, right? Because “a friend is someone who likes you and wants to be with you.” And don’t we like each other and want to be together? Yes, we do! We want to stay here in the Taylorverse together like a never-ending, slightly-too-erotic slumber party where somehow Taylor Swift is our love interest and we are hers, and we are all, undoubtedly, BFFs forever, our wristbands pulsating green, just like Taylor’s outfit when she belts out her finale, “Shake It Off” … “Haters gonna hate, hate, hate … I’m just gonna shake, shake, shake.”