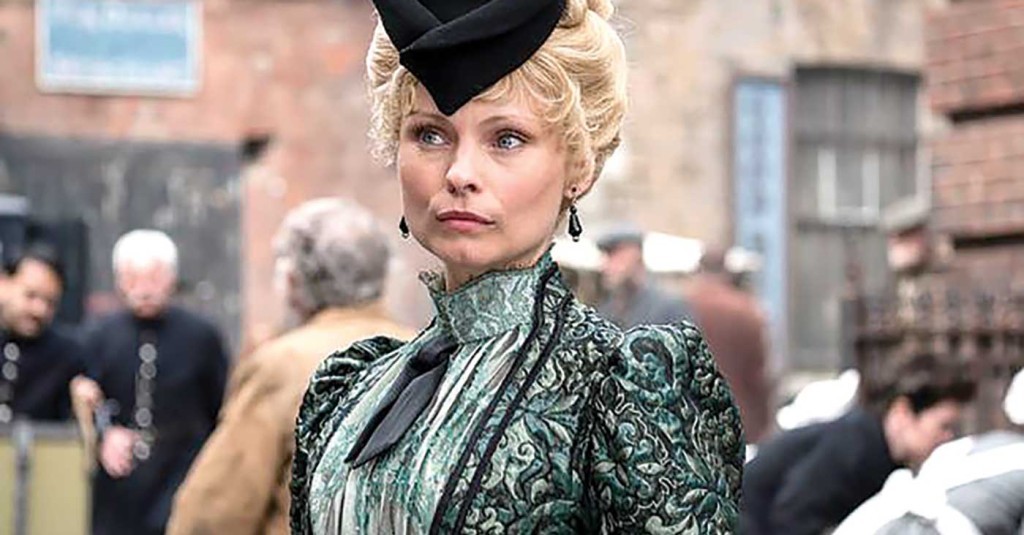 RIPPER STREET: SEASON THREE
2014; $26.98-34.98; UR
This BBC series, much like “Copper,” immerses us in the daily plight of a city police department during a time of societal malaise. In this case the police are in H District, charged with keeping the piece in post-Jack The Ripper (they hope) Whitehall. Matthew “Pillars Of The Earth” Macfadyen is the upright and honest inspector who must wade into this cesspool of inner-city London and — somehow — bring order, always on the lookout for clues of Jack’s devilish deeds. The highlight of this season is a visit by Long Susan (icy Swede MyAnna Buring), who has a “history” with Reid and is now embroiled in the plight of a captive child.

ROMAN DE GARE
2007; $24.98; R
That title translates roughly to “a trashy novel one might read on a train,” and it perfectly describes this oft-overlooked French gem about an author (fabulous and mature Fanny Ardant) whose ghost-writer has disappeared. Or is it? There are so many wonderful twists and turns and cloaked identities that it’s all quite dizzying; but there is serious mayhem at its core, with a serial killer/magician on the loose and several people — both corporeal and/or imagined — who seem frantic to keep their real identities and motives a secret. And just try to keep your eyes off Audrey Dana’s “Huguette!” Subtitled, but worth the read.

CROSS
2014; $24.98; UR
Hong Kong action star Simon Yam is best known to American audiences through the “Yip Man” movies, but he’s a veritable movie-making machine, churning out scores of unique movies every year, only a handful of which make it our shores. In this little-known crime drama he plays a tormented serial killer who only butchers people who are about to commit suicide — to save them from going to hell! But he’s not a blood-thirsty monster; he’s driven by the suicide of his strikingly beautiful wife, played, er, by an actress whose name we could never figure out. Co-stars Nick “Unbeatable” Cheung.

HAYATE THE COMBAT BUTLER: SEASON FOUR
2013; $34.98-59.98; UR
Given its popularity, we apologize for never having mentioned this anime before. Oh, Masters! Please don’t beat us! The original manga, now in its 44th volume(!), introduced our hero, a boy who embraces servitude in hopes of paying off the family Yakuza debt, when a misadventure lands him in the mansions of a wealthy young girl who instantly falls in love with him. The girl winds up penniless, too, so she and Hayate, along with a group of friends, wind up in a fleabag apartment building while the girl fights to recover her fortune. Throughout it all, the shy, retiring boy uses his brains and martial arts skills to protect them all — but that’s the easy part. The humor is spot-on, with a wonderfully cracked view of our world and the vagaries of young love amid some of the sweetest, most unpredictable big-eyed lovelies in all of anime. A real treat.

ME WITHOUT YOU
2001; $24.98; R
A welcome re-release of one of our favorite — and least-known — new-millennium movies. Two girls (Anna “American Odyssey” Friel and Michelle “Oz the Great and Powerful” Williams) grow up together in the suburbs of 1970s London. As much a story about friendship as it is a time-capsule of that socially-turbulent era, the two wildly dissimilar teens discover sex, drugs, and rock ‘n roll (though not necessarily in that order) plus the pain of false friendships, all amid the crushing boredom of “safe” suburban life. Includes Kyle “Agents of SHIELD” MacLachlan at his sexy best.

MISS HILL: MAKING DANCE MATTER
2014; $27.98; UR
Julliard Dance is recognized today as one of the world’s foremost Modern Arts academies, training and inspiring our nation’s most promising students. But it wasn’t always so. There was a time when the phrase “Modern Dance” was a pejorative, particularly when applied to Americans. That all changed some 60 years ago with the arrival of Martha Hill, a tireless force of nature who by sheer force of will established the U.S. as the de facto home of contemporary dance. This doc follows her life and legacy, telling the tale as you would expect, largely through movement and music.

SURVIVOR
2015; $12.98-24.98; PG-13
Milla Jovovich hits the streets again in her patented framed-agent ass-kicker persona, determined to stop mad terrorist Pierce Brosnan (or at least some cameos of him) before he blows up London. If you can avoid blinking you might also catch Robert Forster and Dylan McDermott from “Olympus Has Fallen,“ Frances “Harry Potter” de la Tour, Roger “Warehouse 13” Rees, and Antonia “Scrotal Recall” Thomas. (Though, to be honest, we couldn’t take our eyes off leggy blonde Jerry-Jane Pears as the aptly-named “Nymphet.” Yeoww!) A fun mixing of the “agent on the run” action-thriller plotline with lots of walk-ins and fast editing. We’ve enjoyed worse.

YOUNG HERCULES: THE COMPLETE SERIES
1998; $19.98-29.98; UR
Despite legends that say otherwise, the Golden Age of Hercules was circa 1998. That’s when this 50-episode cable series appeared alongside its progenitor, Keven Sorbo’s “Hercules: The Legendary Journeys”, as well as Disney’s animated “Hercules.” Here we follow the supposed life of the legendary likeable demigod as a teenager, played by … Ryan Gosling! Yep, you read that right, ladies! You can now ogle the hunky then-young star of “Lars and the Real Girl”, “The Notebook” (gag, wretch), “Crazy, Stupid, Love”, and the upcoming “Blade Runner” revival in the comfort of your own home! Swooning is optional. Harmless mythical fun.