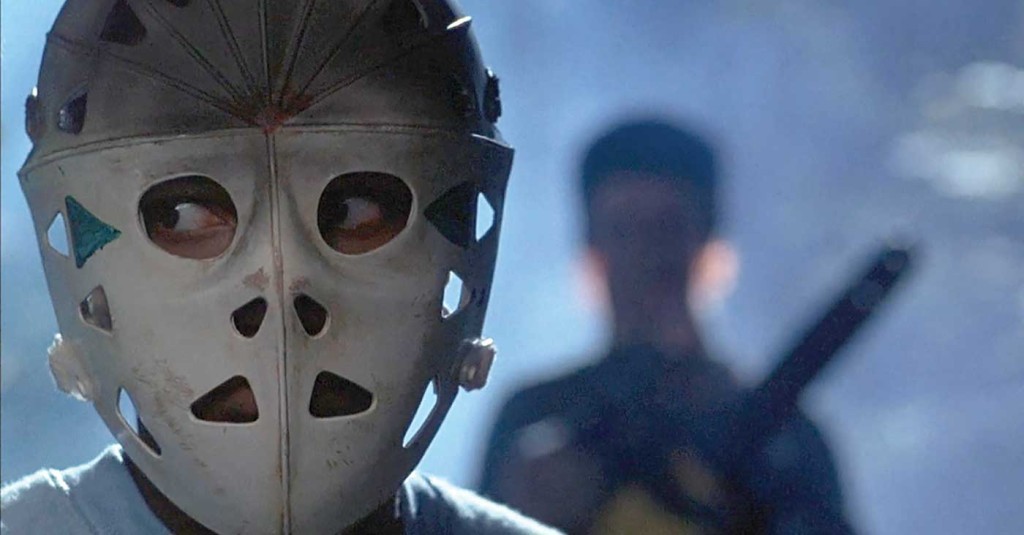 SLEEPAWAY CAMP II: UNHAPPY CAMPERS
1988; $19.95; R
It’s not a spoiler to say that sweet Angela, the surprise serial killer from the original “Sleepaway Camp”  (now Pamela Springsteen, sis to Bruce), is back to his/her old tricks in this sequel — following some gender reassignment surgery and a bit of electroshock therapy, of course. Gangs of nudity, gratuitous and otherwise (bless you, Valerie Hartman!), along with blood, screams, damned funny dialogue and murderous carnage out the wazoo make this a true ’80s time capsule. Enjoy.

SLEEPAWAY CAMP III: TEENAGE WASTELAND
1989; $19.95; R
Pamela Springsteen returns as Angela in the supposed final chapter of this ’80s dead-teen horror-comedy franchise (a reboot/sequel appeared in 2012). Titled in honor of The Who hit, “Baba O’Reilly”, it carries on the comic carnage beautifully, with the added thrill of seeing veteran actor Michael J. Pollard wandering around, apparently with nothing better to do. More decade-appropriate mayhem, filled with blood, chills and the big, warm bazooms of Stacie Lambert, and Jill Terashita, with proper balance provided by itty-bitty committee-member Kashina Kessler,

DEBUG
2014; $18.98-20.98; UR
This crazy, overreaching Canadian sci-fier is a shiny low-rent hoot. In the future, six very attractive young hackers are sentenced to fix the computer aboard a derelict spaceship. Problem is, the computer doesn’t want to be fixed, having evolved its own AI. With the machine in control of every aspect of the ship, those aboard are literally in the belly of the beast. But that’s not the worst of it, as the ship holds a secret that could ultimately threaten all Mankind. With Jason Momoa and some other cleavage.

FOLSOM FOREVER
2014; $17.98; UR
A very welcome look at America, San Francisco style. The predominantly gay community of Folsom — America’s unofficial capital of leather in 1984 — was facing the wrecking ball thanks to bigotry and the AIDS crisis, all disguised as “civic redevelopment.” To draw attention to themselves and their plight they created the now-legendary Folsom Street Fair, a wildly out-there and crazy-proud mix of art, whips, food, bondage, music, buns, dog collars and fetishism. This doc captures it all.

KINGSMAN: THE SECRET SERVICE
2014; $15.98-49.98; R
We missed this at the theaters, and now those cheap corporate a-holes at Fox are refusing to provide the traditional courtesy-copies for us to review. Hey, if they don’t think the LEO reader is worth their time, f*ck ‘em.

KNIGHTS OF SIDONIA: SEASON 1
2014; $39.98-69.98; UR
A wildly ambitious and very popular anime series that posits a far future, long after the Earth is decimated by monstrous aliens. Mankind now survives only in asteroid colony-ships where giant robots keep the peace. But this Mankind is far different from today’s: They have evolved to use photosynthesis for food; cloning provides reproduction among the three sexes; and everyone works for the military, always on guard. Into this strange world crawls young Nagate, whose family has hidden deep in the bowels of the ship for generations — just as the alien menace is about to return! Terrific.

MARDOCK SCRAMBLE TRILOGY
2010; $27.98-49.98; TV-MA
With the most beautiful artwork ever made for the small screen, coupled with what seems to be deep literary underpinnings, this may be our favorite anime of the year. A 15-year-old prostitute, murdered by a sadist, is resurrected as a cyborg in a future world to track down her killer. Since he belongs to an untouchable class of wealth and power (the Koch Brothers), she is aided by Oeufcoque, an intelligent “something” that can take any shape or form, most often that of a mouse. Dark, heady, thought-provoking adventures for a mature audience. Our highest recommendation.

SERENA
2014; $20.98-29.98; R
Did you know that Jennifer Lawrence and Bradley Cooper made a movie together after “Silver Linings Playbook”? Well, they did, filmed largely in the Czech Republic with hopes of drawing some Oscar attention. It didn’t get it, and was finally dumped to a few American theaters in March-April of this year. Set in 1930s North Carolina timber country, she weds a powerful, ambitious forester (Cooper). But this is no meek country wife, becoming a veritable force of nature, embodying the burgeoning 20th Century woman until a miscarriage sends her into a spiral of depression and insane jealousy, Would have made one helluva musical.

THUNDERBIRDS: THE COMPLETE SERIES
1965; $44.98-69.98; UR
Arguably the best-known of all Gerry Anderson’s SuperMarionation TV outings (just three years before launching the groundbreaking live-action series, “UFO”), this finally gets the Blu-Ray treatment in a bonus-laden set. The year is 2065; the five Tracey Brothers, ensconced in their secret island base, use scientist-daddy’s planes, rocketships and inventions to rescue people anywhere on the globe — or in space! The most action-packed of Anderson’s many puppet creations, this was followed by two Thunderbird movies (1966 and 1968), two modern-day series’ (2004 and 2015) and was the inspiration for 2004’s “Team America: World Police.”

A BLOOD STORY
2015; $17.98; UR
Ham-breasted hottie Mindy Robinson from “Ted” stars in this crazy, all-over-the-place horror tale as a top fashion model whose career is cut short by her knife-wielding hubbie. Scarred, she discovers the restorative Fountain Of Youth (could we make this up?), but it is under the control of an ancient evil, intent on wiping Man from the Earth. Sheesh! Some days you just can’t win! Watch for cameos by Debra Lamb from those infamous early-80’s “Electric Blue” shorts as Elizabeth Bathory, plus lovely Linnea Quigley, who danced on “Louisville” graves in “Return Of The Living Dead”, and the late action-master, Robert Z’Dar.

BEAUTIFUL AND TWISTED
2015; $20.98; UR
One of those once-star filled heaps of hokum from the LifeTime Channel, this one starring Rob Lowe, who narrates the tale from his slab in the morgue. A wealthy comic book junkie who owns the original Batmobile (the movie’s real star), he comes to a bad end thanks to his stripper-wife, Paz Vega (“Big Time in Hollywood, FL”), who does a crazy lap-dance. Other notable names include Candice Bergen, Seychelle Gabriel from “Falling Skies”, and Michelle “90210” Hurd, Harmless TV titillation.

BONANZA: SEASON 8
1966; $58.98-69.98; UR
Season 8 of this venerable TV oater includes the episode, “Horse of a Different Hue”, guest-starring one of the most underappreciated comic actors ever to grace the screen: Charlie Ruggles. If you don’t recall the name, you will remember the face and voice from such great fare as “The Beverly Hillbillies”, “Laredo”, “Bewitched”, “The Munsters”, “The Andy Griffith Show”, “The Man from U.N.C.L.E.”, “Son of Flubber”, “The Red Skelton Hour”, and as the voice of Aesop on “The Bullwinkle Show.” Nine discs of classic TV perfection.

BOYS IN BRAZIL
2014; $24.98; UR
São Paulo and it’s renowned Gay Pride Parade is the setting for this tale of a close-knit group of friends – all of them “en el armario” (in the closet) – who make a pact after one is attacked: By next year’s parade they will openly announce to the world, family and friends that they are Gay. A flamboyant, subtitled Portugese-language drama in classic/corny telenovella style, with a dash of comedy and genuine affection for its characters.

PROJECT ALMANAC
2014; $17.98-39.98; PG-13
A flashy, shallow, time-travel tome written around the talents of its teen stars. Jonny “Taken 3” Weston discovers his dad’s old time machine, so he and bud Allen “Zoey 101” Evangelista go time-surfing and nearly destroy all of creation. Luckily they have the good sense to pick up Amy “Louie”Landecker, Sofia “The Messengers” Black-D’Elia and Virginia “Glee” Gardner along the way, who set them on the right course.

THE FACTS OF LIFE: SEASON 6
1984; $19.98-29.98; UR
Season 6 of this venerable squeaky-clean sitcom turkey (which we truly hated as kids) features one of the better episodes of the series – if only because it involved a change of scenery! Mismatched fem-buds Blair, Tootie, Natalie and Jo find themselves dateless on a Saturday night, and decide to go joy-riding through nighttime Peekskill, hoping to flirt with – gasp! – boys! It goes horribly wrong of course, leading them to huddle in their broken-down heap at a closed gas station in the middle of the night.