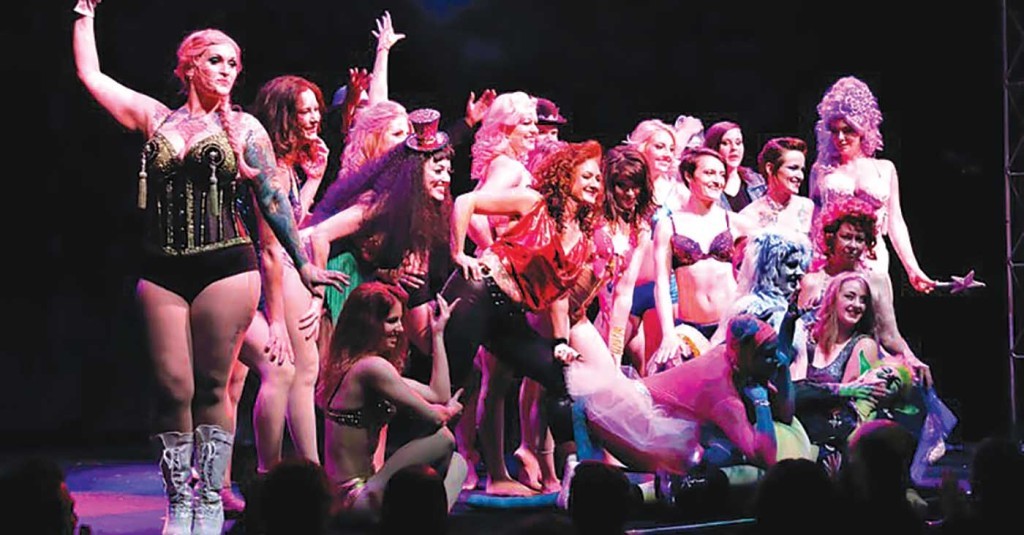 At this point, it’s redundant to spend time gushing about the indisputably talented group of artists and performers that make up the Va Va Vixens. Singers, dancers, comedians, acrobats, aerials and so many more talents go into each and every performance. “Va Va Vortex” is no exception.

It’s Sunday afternoon, and Headliners is filled with half-naked acrobats performing a rocked-up mix of that one song from that one scene in “Dirty Dancing.”  It’s one of the final rehearsals the Vixens will have before debuting their latest show.

This time around it’s a burlesque take on time traveling tropes, a la H.G. Wells, or more directly a cabaret version of Dr. Who. Onstage you’ll see things like a time traveling orb lamp that bends the limits between all space and time, a post-apocalyptic pseudo-hippy bag lady companion from the future and an inflatable Jabba the Hutt costume. On the ground are masks that resemble giant alligator and pterodactyl heads; they’re strewn among piles of costumes, decapitated omens of a spectacle still to come. I look around the room, where I’ve watched a thousand shows before and realize that these walls have certainly never seen a show quite like this one.

The performers are focused and in good spirits; their routines are running smoothly. It’s the transitions between numbers where they’re focusing their attention today. Lisa Frye (the person with official title of Head Vixen in Charge) is taking notes on how to make the technical execution of the elaborate stage show happen more fluidly when they open in less than a week.

Onstage, they’re doing a dark interpretive dance to “Cell Block Tango” from the show “Chicago” — the tale of three scorned women murdering their lovers — with prop guns and knives, and there’s a sultry vitriol that comes out when the performer recites the line, “Some guys just can’t hold their arsenic.” It’s palpable. There’s a sexy Victor/Victoria strip tease, a pink haired Marilyn Monroe and a hilarious Henry the VIII. You’ll see a wicked performance of Christina Aguilera’s “Nasty Naughty Boy” that is an absolute show stopper. And then there’s the aerial performance by an acrobatic Slave Leia … no more words are necessary.

And all of that is only part of the first act!

The second act opens with words I never thought my fingers would type: a sexy homage to Michael Jackson. The Vixens have a regal version of Queen’s “Killer Queen,” a subdued psychedelic “Dazed and Confused,” suffragettes and a fan dance to Grace Potter’s “Paris.” The dark Jack the Ripper routine is mildly disconcerting, but is immediately eclipsed by a disturbing rendition of Lionel Richie’s “Lady.”

There is so much more between curtains up and closing bows, including a finale you’ll just have to see to believe. And once again the Vixens have managed the wieldy task of putting on a beautiful, artistic show packed with unfathomable talent, while managing to keep the mood lighthearted and funny. “Va Va Vortex” is undoubtedly a time traveling show for the ages.