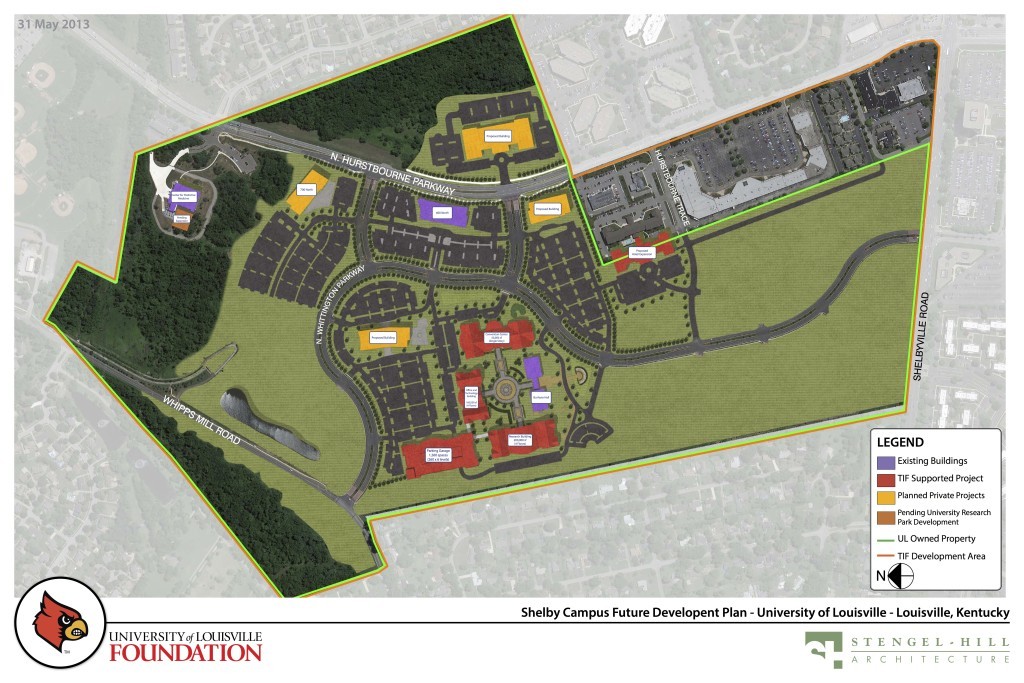 Residents from the communities surrounding The University of Louisville’s ShelbyHurst campus filled room 162 in Burham Hall on Thursday, June 18, to give Glenn Price a piece of their minds. Price, a lawyer with the downtown firm Frost Brown Todd spent most of the evening reiterating his position in the face of vocal protests by residents concerned about everything from environmental impacts to the impact of increased traffic on already busy roads, to how building 214 rental units could impact a community of mostly single-family homeowners.

Residents concerned about possible environmental impacts came prepared. One Lyndon resident, Peggy Myer, set up a table outside the meeting so that residents could sign a petition giving them more time to speak at the next of three public meetings about the rezoning. She also brought pictures showing how bad current flooding issues are in the area around Beargrass Creek — flooding that residents fear could be made worse by the proposed construction. Myer and others maintain that run off from the development itself and additional run off caused by the thinning of the tree canopy would  exacerbate an already serious flooding problem for families living near Beargrass Creek. Price told residents that while there is nothing definite since the plans had not yet been examined by Louisville Metro Planning and Design, that the most cost efficient solution would be a ditch between the complex and the river.

Others are concerned about the negative impact to the tree canopy, especially in face of Mayor Fischer’s call to improve and increase the city’s tree canopy from 37 percent to 45 percent over the next 40 years. Price admitted that construction of the apartment complex — 11 three story buildings with 300 parking spaces — would mean cutting down a significant amount of the trees. He added that, by MSD guidelines, they are required to maintain a 25-foot buffer of trees and that the final construction would “meet or exceed” those requirements. This would mean, however, that at least 50 percent of the trees would have to be cleared for the buildings, parking, drainage “and other improvements.”

The loss of trees also means the loss of green space Lyndon residents say their families use and enjoy. Price assured the crowd there are tree canopy requirements NTS will have to follow in order to build on the site. He added that for every square footage of trees removed, there is a ratio of trees that must be replaced. “We are going to comply with those requirements,” Price said. “We’re going to try and save as many of the trees as we can — and certainly as many as required by the ordinances.”

Mike King, a resident of Lyndon, says people are also concerned about the raw expansion this development represents. Residents are concerned, according to King, about the relationship between NTS and the University of Louisville Foundation, and the Foundation’s intention to create profit-generating properties when UofL is, in theory, a nonprofit state educational institution.

When one neighbor asked what the rental price for the apartments would be, Price responded that while it hasn’t been decided, “in this area, they would probably be considered luxury apartments.” He added, “This would be consistent with other apartments we operate in the area.”

NTS President and CEO Brian Lavin told the residents that while the specific design of the units hasn’t been determined yet, they would likely be mixture of one- and two-bedroom apartments. The current plan calls for around 214 units. Switching the zoning classification from its current designation R-4 (residential single family) to R-6 (residential multi-family)  would allow the University of Louisville to build up to 17.6 dwelling units per acre. Building height is limited to 45 feet, though, which might put a damper on any plan grander than the one currently being tossed around. Of the approximately 18 acres, Price said that the proposed apartment complex would take up 3 acres of land in buildings, plus parking.

Some are concerned about the impact an apartment complex moving in might have on the value of their homes. One such resident, in addition to pointing out that losing tree canopy in the name of construction was not only contradicting the mayor’s plan to save the tree canopy, also suggested that the nature of the construction itself was not as luxurious as Price and his team tried to assert. “If you’re going to have one and a half, maybe more than one and a half [parking] spaces per unit” he said, “that implies maybe, yes, less three-bedroom apartments. But it also seems to imply not luxury level apartments. A lot of these folks are only going to have one car.”

Many residents expressed resentment towards UofL for being a bad neighbor and placing potential profits above the concerns of its neighbors in Lyndon and Bellemeade. Myer told Price and his team that UofL was contradicting its original 50-year plan for ShelbyHurst that did not include this kind of construction. More than one resident accused the university of breaking faith with its neighbors in the name of profits.

The next public meeting about the rezoning issue is July 26.