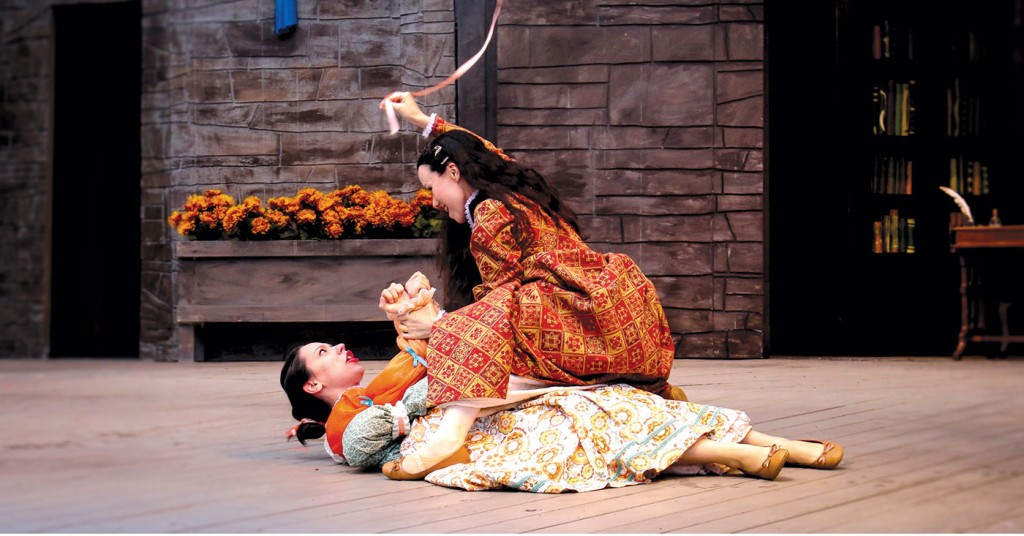 Kentucky Shakespeare's 'The Taming of the Shrew," currently playing in Central Park

“The Taming of the Shrew” is almost — but not quite — a play within a play. It starts with a framing element straight out of a folktale. A drunken ne’er-do-well — a tinker named Christopher Sly —  passes out after busting up a tavern. While he sleeps, a noble person arranges a grand conspiracy that will fool Sly into thinking that he too is a nobleman who has just recovered from a spell of lunacy. Then, when a troupe of performers arrives on scene, the noble compounds the deception by asking the actors to perform for Sly — and telling them to disregard any odd behavior from Sly — because he’s never seen a play, and may not know how to behave.

In the Kentucky Shakespeare’s new production of “Shrew,” which opened last weekend at the C. Douglas Ramey Amphitheater at Central Park, this quirky little opening gambit — featuring juicy performances by Maggie Lou Rader as the tricky hostess; Jon Patrick O’Brien as the target of the jest; and Jacob Endris as the gender-switching page in disguise as Sly’s Lady — offers a rip-roaring preface to an evening full of trickery, lust and some very strange relationships. As Director Amy Attaway observes in a savvy program note, these scenes, known as “The Induction,” are frequently cut. But in this production, we see that its production is more than an opening joke; it’s key to understanding the tale that follows, the tempestuous story that centers around the shrewish Kate (Abigail Bailey Maupin) and the man who would tame her, Petruchio (Gregor Maupin).

The story of Kate and Petruchio is — for contemporary audiences, certainly — as vexing and uncomfortable as, say, that scene in “McClintock” where John Wayne lays Maureen O’Hara across his lap and spanks her.

In fairness, Petruchio never strikes Kate — but attempt to tame her he does. And the genius of Attaway and company’s take on the play is that they completely honor the script, delving deeply into its details until they reveal a central idea that’s as subversive and marvelous as anything in the Shakespearean canon. Frankly, even in a weak production, “Shrew” is among the funniest plays every written. But when you consider the ingenious structure of the “play that’s not quite a play within a play,” it’s clear that the vaguely open-ended frame isn’t inadvertent. Shakespeare, himself the slyest of storytellers, understood how to craft an infinite jest. But to pull off such a grand joke takes a great director and a great cast — and most of all, a great Kate. This production has all that.

Any detailed plot synopsis of “Shrew” is as complicated as an engineering blueprint of a plate of spaghetti, but here’s the gist: in Padua, a wealthy Lord named Baptista (Dathan Hooper) has two daughters, Bianca (Sarah Jo Provost) and Kate. Bianca is beloved by her father and a slew of suitors (everyone except her sister) because she cultivates a superficial aura of pure, graceful compliance.

Baptista — as cynical and self-serving a father (and broker of his daughters) as you could hope to meet — has mandated that Bianca, the younger sister, cannot marry until someone has taken the older sister’s hand — but Kate is famously combative in temperament. There are no suitors until Petruchio — a prototypical mercenary anti-hero of the type often found in romantic comedies — arrives on the scene determined to “wive it wealthily in Padua.”

What ensues is a clockwork tangle of disguises and deceptions, visual and verbal gags, and one of the best love stories ever, as Petruchio builds a bizarre psychological web in his attempt to ensnare Kate  (and other duplicitous romantic schemes run in parallel).

It’s complicated, but Attaway and her cast deliver the story with such an easy authority that even the subtlest of jokes elicited laughter on opening night. This is a production that’s easy to “get.”

That’s largely because over the last couple of years the Kentucky Shakespeare players have honed themselves into a formidable ensemble with an amazing command of this repertoire. But it’s also because Attaway has formed each character in a mold derived from commedia dell’arte — you see it in Bianca’s balletic postures and the harp flourish that announces her grandiose exits (sound design is by Laura Ellis; lighting by Casey Clark; sets by Paul Owen); you see it in the scoliotic curve of Gremio’s spine — in a marvelously disciplined performance by Jon Huffman as Bianca’s elderly suitor.

And you see it throughout the play in bright, witty costumes by Donna Lawrence-Down.

The cast of 17 delivers outstanding performances throughout: the shape-shifting Lucentio (Zachary Burrell) and Tranio (Neill Robertson); the suitor Hortensio (Darnell Pierre Benjamin) whose quest for Bianca goes awry but lands him a different bride (Maggie Lou Rader, who, like many of the players, fills multiple roles); Megan Massie in a fabulous white costume as Biondello; Tony Milder as Petruchio’s comic minion Grumio; and, in multiple roles, Renea Brown, Jeremy Sapp, Braden McCampbell and Tom Luce deliver vivid vignettes — proving that Kentucky Shakespeare has a deep pool of talent, indeed.

And happily, that pool includes Abigail Bailey Maupin in a magnificent performance that by turns roars and reasons, and in an amazing last-act speech proves that in the end this Kate is less tamed than shrewd.