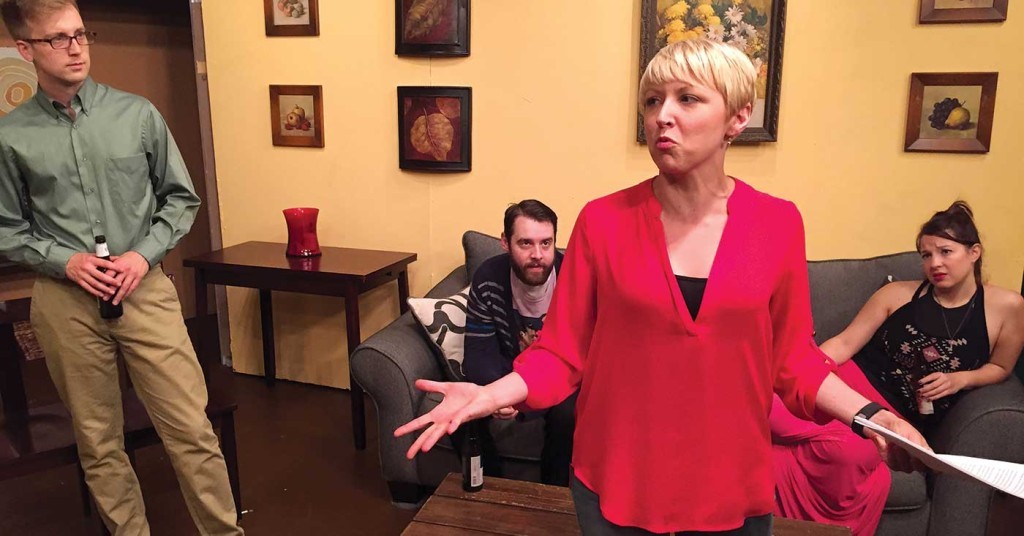 Most of the teachers in that list are kind souls — even the ones with pretty serious character flaws.

Then there’s Leonard, the brilliant, bitter, brutal teacher at the center of Theresa Rebeck’s 2011 drama “Seminar,” which opened last weekend at the Bards’s Town Theatre in a production directed by Brian David Walker (perhaps best known locally for his “dirty sexy derby play”).

Leonard, it seems, was once a towering figure in American letters. And though he hasn’t recently written anything of note (and, though his reputation is tainted by a whiff of scandal), he still has enough clout that four aspiring young writers have banded together to pay him $5,000 apiece to teach them in a private master class.

The four young writers are at various stages of their careers. Kate (April Singer) is lucky enough to live in a rent-controlled apartment in a pricey New York City neighborhood. She’s a Burlington grad who has been obsessively honing a story for a very long time — because some writing luminary once told her that it had promise. Douglas (Ryan Watson) has enough family connections (and enough talent) to qualify for fast track invitations to famous writing colonies like Yaddo (and, yes, he’s rewriting a story that has found interest at The New Yorker). Martin (Jon Becraft) is an impoverished fellow, who has never yet had the nerve to show his work to anyone. And Izzy (Beth Tantanella) is a vivacious charmer who might be an intellectual lightweight — or might be cunning enough to figure that if writing is a man’s world, coming off as a dunderhead might be the best way for a woman to get ahead.

As a group, this quartet, drawn together by their shared dream that they might make it in the rarefied world of literary fiction, is a tangle of ego and insecurity, idealism and cynicism. The pompous Douglas talks about literature in language that sounds like a cluster of footnotes from a turgid critical essay. The other three might think what Douglas says is just plain silly — or they might try to outdo his pretentiousness. But just in case his connections might be their own entrée into the promised land, they have no intention of challenging him to his face.

Enter Leonard. He’s been spending his time in war zones and failed states where he’s encountered psychotic Moldovan cab drivers and brutalized Rwandans. And in a bravura performance, Brian Hinds plays Leonard with as many nerve-wracking tics as a time bomb. Hinds doesn’t overdo things, but Leonard is a quivering mass of anger and tension — and of course, he has little more than contempt for writers who aren’t ready to confront the world in all its bloody ferocity.

So as he strides the room, reading — and dismissively dropping leaves of prose to the floor as he moves from page to page — it quickly becomes clear that kind-hearted nurturing isn’t his style. Nor is gender-neutral language — writing for him is a manly activity — and he’s not about to be constrained by restrictions on his use of earthy language.

This is master class as boot camp — think “Full Metal Jacket,” or imagine Bobby Knight as a literary critic on the brink, and you’ll get the idea. Leonard may be the most pretentious person in the room (his critiques of the students’ writing are as earthy as Douglas’s ruminations are rarefied). But his unhinged, uninhibited willingness to say pretty much anything at all in defense of his own writerly values makes for some delicious, discomfiting fun — right up to a resolution that is as satisfying as it is conventional. Do such teachers walk the earth? Let’s hope not, anyway. And let’s hope that if they do that the students they abuse aren’t so willing to bed them. •