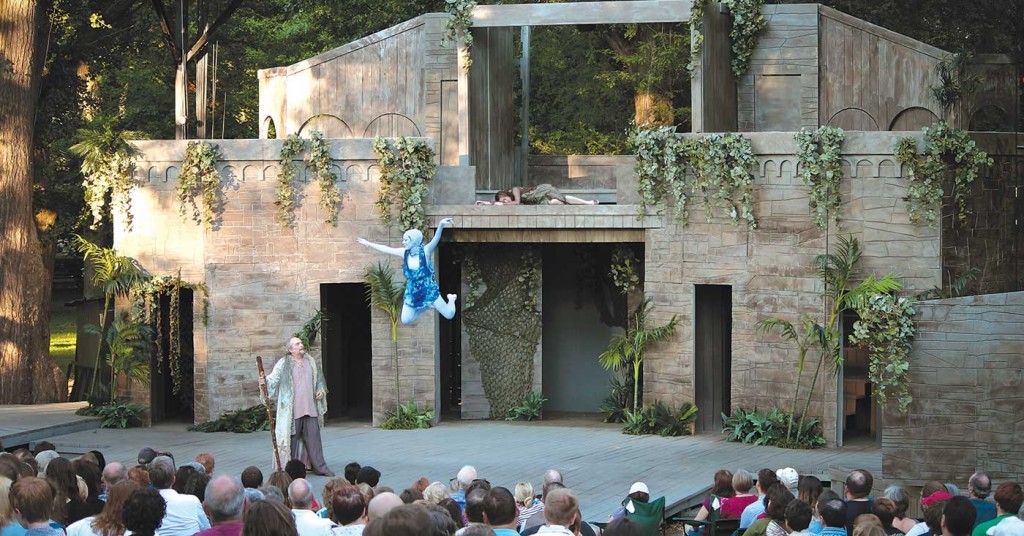 'The TEmpest' performed in Central Park.Courtesy of Kentucky Shakespeare

By the end of his career, Shakespeare wielded the sort of transformative power that alchemists dreamt of in their workshops. His narratives started to bend, fold and mutilate the base genres of theater — comic romance, revenge dramas, historical fiction — into  exotic structures never before seen, plays filled not only with beautiful language and sharply observed psychology, but forms that cultivated nuance, ambiguity and the blissful mystery of loose ends.

“The Tempest,” the last work credited to Shakespeare’s lone hand, is the culmination of that period. Its complexity poses enormous challenges for directors. Parallel plot lines veer from bitter to sweet. The tonal register shifts easily from chilling, murderous logic to sweet, swooning silliness, from the earthy intoxication of drunkenness to the ethereal flight of fairies.

At a deep level, all those tangled threads build a structure that plays out as a clash of values, and it’s not unusual for a director to pick a side, to stress one element over another. Sometimes the director’s choice reflects ideology — well-justified by the play’s exploration of authority, liberty, gender and the emerging colonialism of the time. Sometimes it just reflects the dramatic or comic strengths of a director or a company.

What became clear last year during Matt Wallace’s inaugural year at the helm of Kentucky Shakespeare is that he’s a deft Shakespearean dramaturge who understands the core of these plays and knows how to produce compelling, accessible theater that keeps audiences riveted on the action even in a Central Park setting so splendid (and now much improved by new seating, stage lighting and sound technology) that the place itself can become a distraction if ever the action on stage starts to lag.

Nothing lags in Wallace’s staging of “The Tempest.” And he and his cast and crew have created a superbly balanced “Tempest” that confidently juxtaposes the play’s gravity and light.

From the opening shipwreck scene (Braden McCampbell, Jon Patrick O’Brien, Boatswain) — featuring choreography that could just about induce seasickness in an audience member — to the final moments, when Prospero (John Huffman, whose portrayal of the wronged royal wizard blends intellect and emotion, anger and tenderness, gravitas and wit) delivers a farewell that might have come from Shakespeare’s mouth, this production hurtles forward.

Years before, Prospero, Duke of Milan, was deposed by his brother Antonio (Jeremy Sapp). Ever since, Prospero and his daughter Miranda (Megan Massie) have been trapped on an exotic island with a few minions, while Prospero has developed his considerable powers as a wizard.

The action begins when a ship bearing Antonio and an entourage led by Alonso, the King of Naples (Tom Luce), sails near the island. Prospero whips up a storm — and that opening shipwreck — then uses a series of spells to separate the parties into units that he can manipulate for his own vengeful purposes.

One party includes Antonio, Alonso and the king’s retainers, his brother Sebastian (Darnell Pierre Benjamin), Gonzalo (Monte Priddy), Adrian (Maggie Lou Rader), and Francisco (Neill Robertson). It’s a cynical, conniving bunch —  except for Priddy’s honest, avuncular, slightly bumbling Gonzalo. Here it’s the cool machinations of Antonio — once a usurper, always a usurper — that drives one of  Shakespeare’s most chilling scenes, and Luce is suitably cold-blooded as he reasons with Sebastian about the justifications for the murdering Alonso in his sleep.

Elsewhere, two shipwreck survivors, Stephano (Gregory Maupin) and Trinculo (Zachary Burrell) fall in with one of Prospero’s monstrous minions, Caliban (Dathan Hooper, in a grand, groveling comic performance that gets added sparkle from one of Donna Lawrence-Downs’ superb costumes) and engage in a series of delightful drunken escapades rich in wordplay, of course, but also featuring some spectacular physical comedy.

Meanwhile, Alonso’s son Ferdinand (Jacob Endris) encounters Miranda, and the two launch into as satisfyingly goofy a romance as one could ever hope to see on the screen.

Because each party thinks the others have been lost at sea, Shakespeare has plenty of opportunity to play with ideas of how morals unravel in chaotic situations — but we know that Prospero is pulling the strings, and that his sprite Ariel (Sarah Jo Provost, whose bright aerial work, using flying effects from ZFX, Inc., high above the stage in a gleaming blue costume is a delight for the eyes) and her team of spirits (Abigail Bailey Maupin, Renea Brown, Tony Milder and Braden McCampbell, all of whom also double as sailors) are gradually herding those folks together for a final confrontation that will bring everyone together in one of Shakespeare’s grand resolutions. And in this staging (which benefits from outstanding contributions by set designer Paul Owen, lighting designer Casey Clark, sound designer Laura Ellis, and composer/musical director Scott Bradley) the closing is as poignant as can be.

Kentucky Shakespeare has been branching out this year, and this week the company partners with Louisville’s annual Greek Festival to present the classic Greek comedy, Aristophanes’ “The Birds,” directed by Greg Maupin (who knows his way around all kinds of comedy). The production is slated to run June 10-11 at 7 p.m. in Central Park (you can catch it on a double bill with “The Tempest”) and June 12-14 at Festival Plaza in Waterfront Park. For more information connect to louisvillegreekfest.com.