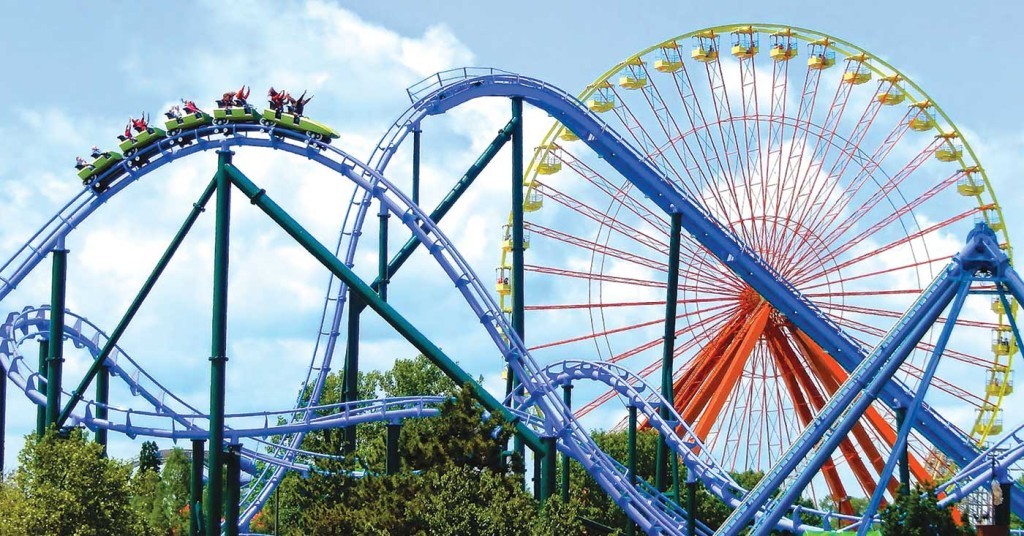 We all want to go a little crazy in summertime and escape the indoor grind. From diving off Kentucky Kingdom’s 12-story diving board to jumping ramps on the underground bike trails at Mega Cavern, LEO’s got some tips on where and how to free your mind.

Tee off at Shawnee

It doesn’t seem that long ago that I busted out of the final day of school, picked which summer reading books I was going to pretend to read, while planning three months of summer festivities … and sleeping in. So it goes for kids and parents, as we enter the 2015 installment of the annual battle to find constructive, safe, physically-fulfilling activities over summer vacation.

The First Tee of Louisville is an answer to all of those challenges. The mission of the First Tee is to expose kids to the game of golf, where they will learn the nine core values — honesty, integrity, sportsmanship, respect, confidence, responsibility, perseverance, courtesy and judgement. By getting the would-be golfer off the couch and away from TV and video games, First Tee also helps instill physical, emotional and social habits, through active, social engagement. As a golfer since I was old enough to walk, I can say that this sport, unlike any other, helps both kids and parents develop all of these life skills, while playing a game that will last them a lifetime.

The First Tee headquarters is open all summer at Shawnee Golf Course, where they have first-class practice facilities and a three-hole par 3 youth course. Meanwhile Seneca golf course has recently added a youth course for First Tee members. And while kids who join the program can play all day for free, the First Tee is now inviting parents to join their kids and play the youth course.

Eight PGA Professionals and a youth specialist are on staff to help make summer an invaluable experience for kids and their parents, all while playing a game. —Aaron Yarmuth

Lose your mind on Lightning Run

When you’re perched atop the first drop of Kentucky Kingdom’s Lightning Run roller coaster, staring down what is damned near a 90 degree plummet, your mind will be as free as a zen yogi who’s achieved enlightenment. I mean, the intellectual part of the brain evacuates the premises and all that is left is the visceral, and there’s not a coherent thought to be had that isn’t aiee! woo-hoo! yeah!, noooo! or some other onomatopoetic cry. And isn’t freeing our minds what summer fun is all about anyway?

Kentucky Kingdom has added eight new awe-inspiring rides (and I mean that in the old, literal sense of inspiring fear), including the T3 coaster (five inversions!), Enterprise (which turns you upside down and then loops 360 degrees over and over until you’re pleasantly discombobulated) and Cyclos (a wicked pendulum that swings you as far in each direction as is possible without making a full loop). They say theme park enthusiasts are adrenaline junkies, but the opposite may be equally fitting. Maybe some theme park goers are zen seekers, finding calm through seeming chaos. It sure worked for me.

When you’re done being dropped, looped, spun and whirled about (and please, your fellow theme park enthusiasts will greatly appreciate that you wait until after you’ve ridden Cyclos), you can fully relax with a cocktail at the 21+ Hurricane Bay Beach Club or take a final raft ride down the 52-foot high Plummet Summit into the pool that conveniently exits right beside Taco Tequila, which delivers on its name.  —Laura Snyder

Escape into the past at Locust Grove

Want to time travel this summer or maybe just satisfy a hankering for country life? Located just a few miles from downtown, Locust Grove feels fully rural and very frontier America. Occupying 55-acres just off Blankenbaker Lane, Locust Grove is serene, stately and incredibly lush in summer. You can wander the grounds and tour the 1790 Georgian mansion where General George Rogers Clark’s sister, Lucy, lived with her husband William. Painstakingly preserved and tended, the main house, as well as the outbuildings, are filled with living history — a perfect setting for fulfilling your fantasies of escaping the employee-consumer-coporate-consumer market -driven loop of total environmental disaster that is contemporary life (whew … sorry!). Searching for sustainable micro/local living? Locust Grove has a workshop for that: a hands-on hearth cooking workshop, a beer brewing workshop, a butter and cheese program by micro-dairy wonder Bob Ehrler, a hemp festival and many more DIY, off-the-grid experiences.

The Fourth of July at Locust Grove provides time travel straight back to Independence Day 1816. Free to the public with the grounds open to picnickers, there will be readings of the Declaration of Independence and General Clark’s soldiers will return to honor him and all who fought. Ladies inclined to fainting spells are advised to bring smelling salts. More info: locustgrove.org. —Laura Snyder

Get rowdy with Louisville City FC

When someone scores for Louisville City (LC), purple smoke billows up from the stands as fans set off celebratory smoke bombs; the crowd waves their LC scarves and flags like mad men (or women); and everyone takes a big swig of their favorite beer and chants their favorite drinking song. Finally, Louisville has a professional soccer team, and a pretty good one at that. Part of the United Soccer League, the third tier of the American soccer pyramid, the team has been holding their own with forward Matt Fondy leading the team with 12 goals and only one loss in the past 12 games. Not to mention they qualified to compete in the U.S. Open Cup tournament. And while the club does play in a baseball stadium, that doesn’t take away from that signature soccer atmosphere. Just buy the cheap tickets ($15) and move around from section to section and see the sights. There’s a party section for the rowdy futball fans who know the difference between Manchester United and Manchester City; a laid back area for those who just want to grab a Bavarian pretzel or bratwurst and enjoy some quality sports play; and of course areas for the kiddos to run around and practice their goal celebrations. It’s a nice change of pace for those who can’t stand baseball and can’t get their Big Blue Nation girlfriend (or boyfriend) to go with them to any UofL games. So learn the chants and let’s get rowdy, LC! LC! LC! —Ethan Smith

When you hear the concept for Mega Caverns Underground Bike Park, it sounds like a concept in a BMX video game: “We should have a level where you bike in an abandoned limestone mine next to an abandoned nuclear fallout shelter.” But that’s exactly what Mega Cavern has built, and it’s as rad as it sounds. It’s the only underground bike park in the world and the largest indoor bike park on the planet — 320,000 square feet and 10 stories tall with over 45 trials, including jump lines, pump tracks, dual slalom, BMX, cross country and single track, which (for all the non-riders out there) means there are tracks for everyone of every age and every level. So this summer when the unbearably sticky heat that this godforsaken valley is known for comes around, head to the park to get some adreneline pumping in a cool and constant 60 degree atmosphere. Even if your only bike experience consists of riding two blocks to work, just being at the park will make you want to rent a bike ($20) and hit the ramps. And in a LEO exclusive! (Sound the alarms!), the Mega Cavern has ordered a blob (also known as a water trampoline) that will act as a foam pit in the future practice area for those who want to test out that backflip without actually breaking their back. —Ethan Smith

How do we love Shakespeare? Let’s not count the ways: the sheer physical beauty of the language; the metaphors that enrich our understanding of the world; the profound insights into the human character.  All this and more, of course.

But in the end what makes Shakespeare “The Bard” is that he’s the greatest storyteller in the English language.

And there is no better way to hear a story than to gather at dusk under a canopy of ancient trees and listen to the spinning of tales as howls call in the background.

Kentucky Shakespeare has become a year-round organization, with a growing list of productions and partnerships all around the region — but the heart the mission is still Shakespeare in Central, the oldest free, independently operating Shakespeare festival in North America. And last year, Matt Wallace, in his first season as the company’s Producing Artistic Director, showed that he, too, is no slouch in the storytelling department — and crowds responded in record numbers.

But more importantly, it also builds on last season’s success with a brilliant bill that includes three of the finest plays in the canon (and three of the most fascinating female roles that Shakespeare every created), “The Tempest,” “Taming of the Shrew” and “Macbeth.”

Those plays run in rep through July 25 (with a closing “Bardathon” on the final day.  Then the season closes with an appetizing slate of “Community Partners” productions that includes “A Comedy of Errors” (a student production); “Two Lobbyists of Verona” (a newly-commissioned work from one of the city’s most innovative companies, Theatre [502]; and a revival of Doug Schutte’s (The Bard’s Town Theatre) play “Chasing Ophelia.”